The Legendary Origins of Merlin the Magician 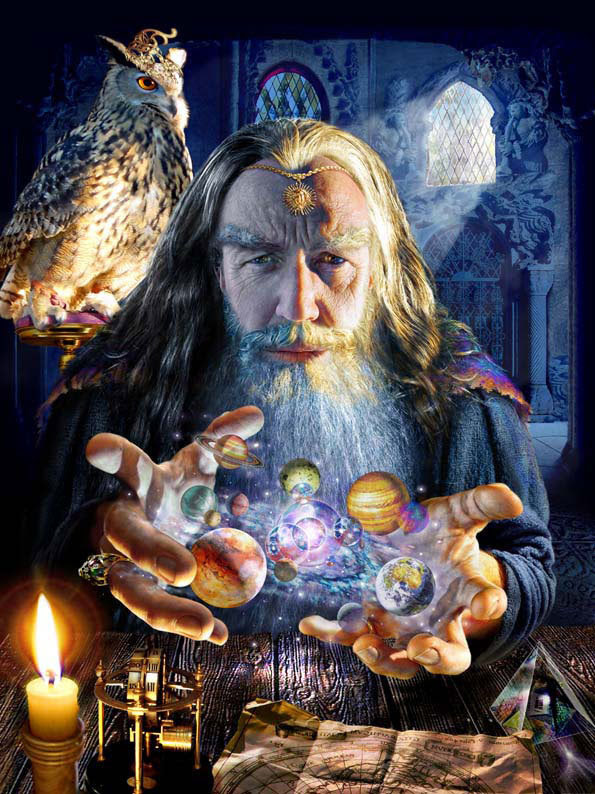 Of course, the fictional character of Merlin was neatly recreated as Gandalf by Tolkien in the Twentieth century and if we skip names, Merlin is part of the whole genre of fantasy and fantasy gaming.  We all recognize this wonderful character.

Its early emergence can be blamed on Geoffrey of Monmouth, but its immediate popularity in Wales allowed it to be picked up and imitated by every troubadour. That is how it was done then.  The real question is whether this character had a previous life in the oral tradition before Geoffrey picked it up.  So far it appears unlikely and we will likely never know.  We really know too little about oral traditions generally.

At least we can thank Geoffrey for his contribution in popularizing a whole palette of iconic medieval characters.

The Legendary Origins of Merlin the Magician

Most people today have heard of Merlin the Magician, as his name has been popularized over the centuries and his story has been dramatized in numerous novels, films, and television programs. The powerful wizard is depicted with many magical powers, including the power of shapeshifting and is well-known in mythology as a tutor and mentor to the legendary King Arthur, ultimately guiding him towards becoming the king of Camelot. While these general tales are well-known, Merlin’s initial appearances were only somewhat linked to Arthur. It took many decades of adaptations before Merlin became the wizard of Arthurian legend he is known as today.

It is common belief that Merlin was created as a figure for Arthurian legend. While Merlin the Wizard was a very prominent character in the stories of Camelot, that is not where he originated. Writer Geoffrey of Monmouth is credited with creating Merlin in his 1136 AD work, Historia Regum Britanniae – The History of Kings of Britain. While a large portion of Historia Regum Britanniae is a historical account of the former kings of Britain, Merlin was included as a fictional character (although it is likely that Geoffrey intended for readers to believe he was a figure extracted from long-lost ancient texts). Merlin was paradoxical, as he was both the son of the devil and the servant of God.

Merlin was created as a combination of several historical and legendary figures. Geoffrey combined stories of North Brythonic prophet and madman, Myrddin Wyllt, and Romano-British war leader, Ambrosius Aurelianus, to create Merlin Ambrosius. Ambrosius was a figure in Nennius' Historia Brittonum. In Historia Brittonum, British king Vortigern wished to erect a tower, but each time he tried it would collapse before completion. He was told that to prevent this, he would have to first sprinkle the ground beneath the tower with the blood of a child who was born without a father. Ambrosius was thought to have been born without a father, so he was brought before Vortigern. Ambrosius explains to Vortigern that the tower could not be supported upon the foundation because two battling dragons lived beneath, representing the Saxons and the Britons. Ambrosius convinced Vortigern that the tower will only stand with Ambrosius as a leader, and Vortigern gave Ambrosius the tower, which is also the kingdom. Geoffrey retells this story with Merlin as the child born without a father, although he retains the character of Ambrosius.

In Geoffrey’s version of the story, he includes a long section containing Merlin’s prophecies, along with two other stories, which led to the inclusion of Merlin into Arthurian legend. These include the tale of Merlin creating Stonehenge as the burial location for Ambrosius, and the story of Uther Pendragon sneaking into Tintagel where he father Arthur with Igraine, his enemy’s wife. This was the extent of Geoffrey’s tales of Merlin. Geoffrey does not include any stories of Merlin acting as a tutor to Arthur, which is how Merlin is most well-known today. Geoffery’s character of Merlin quickly became popular, particularly in Wales, and from there the tales were adapted, eventually leading to Merlin’s role as Arthur’s tutor.

Many years after Geoffrey’s Historia Regum Britanniae, Robert de Boron composed a poem called Merlin. Boron’s Merlin has the same origins as Geoffrey’s creation, but Boron places special emphasis on Merlin’s shapeshifting powers, connection to the Holy Grail, and his jokester personality. Boron also introduces Blaise, Merlin’s master. Boron’s poem was eventually re-written in prose as Estoire de Merlin, which also places much focus upon Merlin’s shapeshifting. Over the years, Merlin was interspersed through the tales of Arthurian legend. Some writings placed much focus upon Merlin as Arthur’s mentor, while others did not mention Merlin at all. In some tales Merlin was viewed as an evil figure who did no good in his life, while in others he was viewed favorably as Arthur’s teacher and mentor.

Eventually, from the various tales emerged Merlin’s downfall, at the hands of Niviane (Vivien), the king of Northumberland’s daughter. Arthur convinces Niviane to stay in his castle, under Merlin’s encouragement. Merlin falls in love with Niviane. However, Niviane fears Merlin will use his magical powers to take advantage of her. She swears that she will never fall in love with him, unless he teaches her all of the magic he knows. Merlin agrees. Merlin and Niviane depart to return to Northumberland, when they are called back to assist King Arthur. As they are returning, they stop to stay in a stone chamber, where two lovers once died and were buried together. When Merlin falls asleep, Niviane places him under a spell, and traps him within the stone tomb, where he dies. Merlin had never realized that his desire for Niviane, and his willingness to teach her his magical ways, would eventually lead to his untimely death.

From Merlin’s inception through the writings of Geoffrey, the wizard appeared in many subsequent tales, stories, and poems. Today, Merlin is most well-known for being the wizard who tutored and taught the young Arthur, before he grew to become the King of Camelot. It was under Merlin’s counsel that Arthur became the king that he was. While this legend continues on today, it is interesting to see the many variations of Merlin, from an evil wizard, to a shapeshifter, to one who met his downfall from teaching his powers to the woman he loved. This powerful and versatile character caught the attention of many people centuries ago, and continues to play a prominent role in today’s storytelling.

The True History of Merlin the Magician – The Guardian. Available from: http://www.theguardian.com/books/2013/dec/11/true-history-merlin-anne-lawrence-mathers-review

Merlin the Magician – King Arthur & the Knights of the Roundtable. Available from: http://www.kingarthursknights.com/others/merlin.asp

The Many Faces of Merlin – Timeless Myths. Available from: http://www.timelessmyths.com/arthurian/merlin.html

Merlin – The Camelot Project. Available from: http://d.lib.rochester.edu/camelot/theme/
31 January, 2015 - 11:41 mrreese
The Legendary Origins of Merlin the Magician