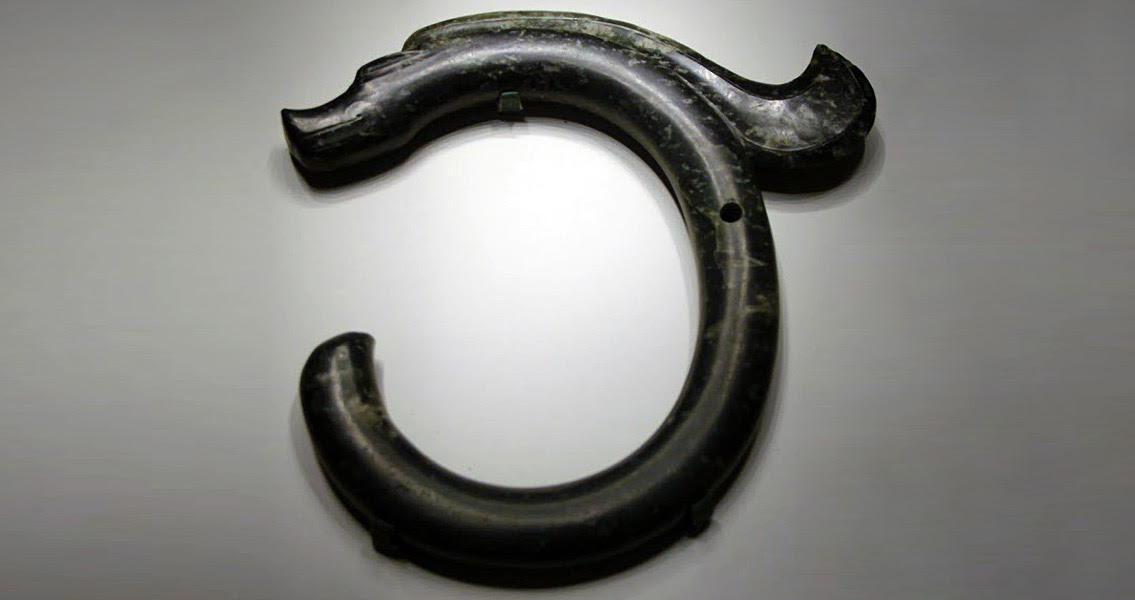 The key date for the global bronze Age is 2400 BC.  This is when the Great pyramid appears to have been built using access to high quality copper from Lake Superior.  This was sufficient to underwrite a global metal working sea connected civilization we know as the Atlantean.


Yet the size and scope screams for the existence of a long prehistory that did not much depend on a metal trade and its natural currency the metal ingot.  This prehistory was land based village agriculture without the threat of mobile cavalry..


That expansion took several thousands of years and took advantage of woodland soils.  This includes Western China and all the Middle East and the Sahara.  The loss of tree cover slowly eroded the hydraulic cycle and the presence of domesticated browsers prevented recovery.  The end result was abandonment and movement into lands were irrigation was possible.

Because we are looking, we are picking up evidence of this huge earlier population and their tools.


This also readfily explains why First atlantean Chinese pyramid building is so far west.  That was were the agriculture was.

New findings have shown that Chinese civilisation may have much older roots than thought.
A study published in the journal ‘Proceedings of the National Academy of Sciences’ has found evidence of a process of rapid desertification in China, 6,500 years ago. Lush areas transformed into arid desert, driving early Chinese people of the Hongshan culture into hitherto unpopulated areas.

The Hongshan culture predates the Xia Dynasty, the first Chinese dynasty described in chronicles, by 2,400 years. As the Hongshan existed so early, it could reveal that the root of Chinese civilisation is thousands of years older than previously thought.

The importance of Hongshan culture to Chinese history, however, has been hotly debated.

Traditionally, Chinese culture is seen as originating in the middle reaches of the Yellow River; Hongshan is often dismissed as a remote culture far from the cradle of Chinese civilisation. Evidence has shown that Hongshan culture was significantly advanced, however.

Excavations throughout northern China have revealed artefacts from the Hongshan culture. The Hongshan displayed some of the earliest known examples of jade working and elaborate pieces of jewellery have been found. The first dragon-like carving in China may have been Hongshan.

“We seem to see evidence that Hongshan was far more important to early Chinese culture than it’s currently given credit for,” said study co-author Louis Scuderi, from the University of New Mexico in Albuquerque. “Archaeologists are having a hard time figuring out what the importance of Hongshan culture was.”

In order to discover more about Hongshan culture, researchers investigated the Hunshandake Sandy Lakes in Inner Mongolia, an area 185 miles (300 kilometres) away from the first Hongshan discoveries. The team found significant quantities of Hongshan pottery and stone items in Hunshandake, indicating that Hongshan culture had been much more widespread than previously thought.

The team also analysed environmental changes over the last 10,000 years. Patterns of dunes and depressions between dunes suggested that the Hunshandake area was once covered with rivers and lakes. Lake sediments indicated that relatively deep water existed in Hunshandake between 5,000 and 9,000 years ago. Pollen trapped in those sediments showed that birch, spruce, fir, pine and oak trees were all common at the time. It appears that the humid conditions in the Hunshandake would have created an ideal environment for Hongshan peoples to exist.

“We’re amazed by how much water there was back then,” Scuderi added. “There were very, very large lakes, and grasslands and forests. And based on all the artifacts we’ve found out there, there was clearly a very large population along the lake shores.”

It was also revealed that the area became much drier around 4,200 years ago. The researchers calculated that 7,770 square miles (20,000 square kilometres) were transformed into desert; Hunshundake remains desert to this day.

This process of desertification would likely have had devastating consequences for the Hongshan community in the area. It is possible that the arid climate in the north of China caused a large-scale migration southwards. Hongshan culture, therefore, may have had a formative role in the rise of Chinese civilisation.

If this is the case, the team’s research could mean that China has much older roots than previously thought. As such, we may need to rethink the very beginnings of Chinese civilisation, and rewrite Chinese history.
Posted by arclein at 12:00 AM