Genetic Memory: How We Know Things We Never Learned 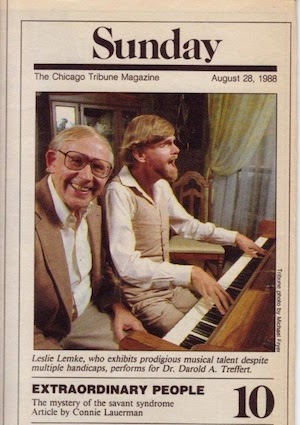 This is really all about a failure to communicate.  Our consciousness has all this innate capacity but then must instruct the physical mind to process this information and express it in terms of our language tools.  It has nothing to do with genetics at all and it more a matter of physical flaws and simple luck or a whack to the head.

From observation those who do luck out are often otherwise incapacitated in life in many ways.  They need to be able to park these abilities and focus on mastering life skills.  It is not necessary a blessing although it would be for an already mature mind.

After All it takes a mature mind to interpret music.  We really need to master the process.  It isposible we are accessing past lifevskill;s asc well which is the best likely explanation.

Genetic Memory: How We Know Things We Never Learned

A picture of Leslie Lemke and the author published in the Chicago Tribune’s Sunday magazine in 1988.

I met my first savant 52 years ago and have been intrigued with that remarkable condition ever since. One of the most striking and consistent things in the many savants I have seen is that that they clearly know things they never learned.

I met my first savant 52 years ago and have been intrigued with that remarkable condition ever since. One of the most striking and consistent things in the many savants I have seen is that that they clearly know things they never learned.
Leslie Lemke is a musical virtuoso even though he has never had a music lesson in his life. Like “Blind Tom” Wiggins a century before him, his musical genius erupted so early and spontaneously as an infant that it could not possibly have been learned. It came ‘factory installed’. In both cases professional musicians witnessed and confirmed that Lemke and Wiggins somehow, even in the absence of formal training, had innate access to what can be called “the rules” or vast syntax of music.

Alonzo Clemons has never had an art lesson in his life. As an infant, after a head injury, he began to sculpt with whatever was handy–Crisco or whatever–and now is a celebrated sculptor who can mold a perfect specimen of any animal with clay in an hour or less after only a single glance at the animal itself–every muscle and tendon perfectly positioned. He has had no formal training.
To explain the savant, who has innate access to the vast syntax and rules of art, mathematics, music and even language, in the absence of any formal training and in the presence of major disability, “genetic memory,” it seems to me, must exist along with the more commonly recognized cognitive/semantic and procedural/habit memory circuits.
Genetic memory, simply put, is complex abilities and actual sophisticated knowledge inherited along with other more typical and commonly accepted physical and behavioral characteristics. In savants the music, art or mathematical “chip” comes factory installed. In addition to the examples mentioned above, I describe others in my book, Islands of Genius: The Bountiful Mind of the Autistic, Acquired and Sudden Savant.
Genetic memory is not an entirely new concept. In 1940, A.A. Brill quoted Dr. William Carpenter who, in comparing math prodigy Zerah Colburn’s calculating powers to Mozart’s mastery of musical composition, wrote the following:

“In each of the foregoing cases, then, we have a peculiar example of the possession of an extraordinary congenital aptitude for certain mental activity, which showed itself at so early a period as to exclude the notion that it could have been acquired by the experience of the individual. To such congenital gifts we give the name of intuitions: it can scarcely be questioned that like the instincts of the lower animals, they are the expressions of constitutional tendencies embodied in the organism of the individuals who manifest them.”

Carl Jung used the term “collective unconscious” to define his even broader concept of inherited traits, intuitions and collective wisdom of the past.
Wilder Penfield in his pioneering 1978 book, Mystery of the Mind, also referred to three types of memory. “Animals,” he wrote, “particularly show evidence of what might be called racial memory” (this would be the equivalent of genetic memory). He lists the second type of memory as that associated with “conditioned reflexes” and a third type as “experiential”. The two latter types would be consistent with the terminology commonly applied to “habit or procedural” memory and “cognitive or semantic” memory.
In his 1998 book, The Mind’s Past, Michael Gazzaniga wrote:

“The baby does not learn trigonometry, but knows it; does not learn how to distinguish figure from ground, but knows it; does not need to learn, but knows, that when one object with mass hits another, it will move the object … The vast human cerebral cortex is chock full of specialized systems ready, willing and able to be used for specific tasks. Moreover, the brain is built under tight genetic control … As soon as the brain is built, it starts to express what it knows, what it comes with from the factory. And the brain comes loaded. The number of special devices that are in place and active is staggering. Everything from perceptual phenomena to intuitive physics to social exchange rules comes with the brain. These things are not learned; they are innately structured. Each device solves a different problem … the multitude of devices we have for doing what we do are factory installed; by the time we know about an action, the devices have already performed it.”


Steven Pinker’s 2003 book, The Blank Slate: The Modern Denial of Human Nature, refutes the “blank slate” theories of human development. Brian Butterworth, in his 1999 book, What Counts: How Every Brain is Hardwired for Math, points out that babies have many specialized innate abilities, including numerical ones that he attributes to a “number module” encoded in the human genome from ancestors 30,000 years ago.

Marshall Nivenberg, from the National Heart Institute, provided insight into the actual DNA/RNA mechanics of this innate knowledge in an article titled “Genetic Memory” published in 1968 in JAMA.
Whether called genetic, ancestral or racial memory, or intuitions or congenital gifts, the concept of a genetic transmission of sophisticated knowledge well beyond instincts, is necessary to explain how prodigious savants can know things they never learned.
We tend to think of ourselves as being born with a magnificent and intricate piece of organic machinery (“hardware”) we call the brain, along with a massive but blank hard drive (memory). What we become, it is commonly believed, is an accumulation and culmination of our continuous learning and life experiences, which are added one by one to memory. But the prodigious savant apparently comes already programmed with a vast amount of innate skill -and knowledge in his or her area of expertise–factory-installed “software” one might say–which accounts for the extraordinary abilities over which the savant innately shows mastery in the face of often massive cognitive and other learning handicaps. It is an area of memory function worthy of much more exploration and study.
Indeed recent cases of “acquired savants” or “accidental genius” have convinced me that we all have such factory-installed software. I discussed some of those cases in detail in the August issue of Scientific American under the title “Accidental Genius”. In short, certain persons, after head injury or disease, show explosive and sometimes prodigious musical, art or mathematical ability, which lies dormant until released by a process of recruitment of still intact and uninjured brain areas, rewiring to those newly recruited areas and releasing the until then latent capacity contained therein.

Finally, the animal kingdom provides ample examples of complex inherited capacities beyond physical characteristics. Monarch butterflies each year make a 2,500-mile journey from Canada to a small plot of land in Mexico where they winter. In spring they begin the long journey back north, but it takes three generations to do so. So no butterfly making the return journey has flown that entire route before. How do they “know” a route they never learned? It has to be an inherited GPS-like software, not a learned route.
Oscine birds such as such as sparrows, thrushes and warblers learn their songs from listening to others. Suboscine species, such as flycatchers and their relatives, in contrast, inherit all the genetic instructions they need for these complex arias. Even if raised in sound-proof isolation, the suboscine birds can give the usual call for their species with no formal training or learning. There are so many more examples from the animal kingdom in which very complex traits, behaviors and skills are inherited and innate. We call those instincts in animals, but we haven’t applied this concept to the complex inherited skills and knowledge in humans.
Some will argue that what the prodigious savant inherits is the “proclivity” or scaffolding on which learning can be applied unusually rapidly, rather than knowledge itself, and like the oscine bird species, they learn from others. My position is that the prodigious savant is a convincing example of suboscine genetic inheritance of the actual instructions and knowledge that precedes learning. That is not to say such inherited skills (nature) cannot be cultivated, enhanced and improved (nurture). They can be. But I agree with Dr. William Carpenter that savants demonstrate a “congenital aptitude for certain mental activity, which showed itself at so early a period as to exclude the notion that it could have been acquired by the experience of the individual”.
I call that genetic memory, and I propose that it exists in all of us. The challenge is how to tap that dormant capacity non-intrusively and without a brain injury or similar incident.