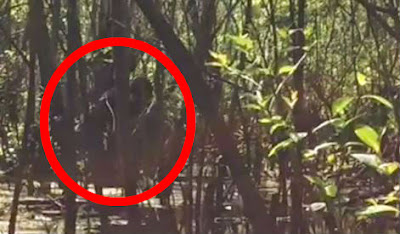 This is actually important confirmation regarding my own thinking and working conjectures related to the so called skunk Ape.  difficult as it is to make out actual detail, we go observe the motion of the limbs and the body.  This is extremely important because i can recognize them.

First of it is certainly not a bear and bears are also unhappy around alligators and i suspect snakes.  Nor will they dive into the swamp to escape mere observation.  The same holds as true for Bigfoot who is even less inclined to swim with alligators.  They are our cousins after all.

However once and for all i saw the limb motions I expect from a Giant Sloth.  That it likes water and alligators is no particular surprise either because this creature can use its long claws to tear an alligator apart with scant risk.  It really is the scariest creature in the woods and it is an ambush predator.  Fortunately for us it is generally nocturnal.

About an hour ago, a reader of Bigfoot Evidence, Matt M. (no relation to Matt Moneymaker), sent us a video that completely blew our minds. While canoeing in a swamp outside of Tampa, Florida, the witness spotted something "walking" and diving in a gator infested area. He starting filming what he thought was a bear. The only problem is that Lettuce Lake Park is a 240-acre Hillsborough County-run park where bears tend to stay clear from. When the following footage was sent to us, Matt was still unsure of what he filmed. Upon closer inspection, we've concluded that this is no bear. Check out the length of its arms and its gate. Yeah -- we know bears can walk on their hind legs too, but this does not resemble a bear at all:

Matt wrote the following in an email to BFE:

I was canoeing some of the swamps around Lettuce Lake Park and saw what I thought was a bear. I told a park ranger about it and she said that bears don’t generally get into the swamp and that there were never many sightings in general. I showed her the video and she said she didn’t know what it was. I saw the Fox13 story about the bigfoot a few weeks ago that mayor said Bob Buckhorn made a statement about and thought this might be related in some way. I never put much faith in the old skunk ape legends but when I looked closer I noticed that it had long, swinging arms and moved through very thick swamp with ease. Certainly can’t explain it myself. I didn’t get very close but I hope that this footage can be enlarged.

Matt agrees with us that if it's a person, "they are either a moron or completely insane". "They are walking, swimming and diving in an area where there are hundreds of 12 foot gators and water moccasins everywhere. I was there watching it for a while. Seemed to notice me and walked toward deeper water. It went underwater and vanished. Paddled up there and it was nowhere to be seen."

[Update] Our friend Phil at ParaBreakdown just posted a stabilized version of the footage. Check it out:

I added in a modern sloth for you to observe.