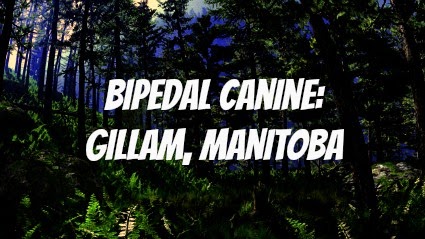 Another bulls eye.  We have a well observed creature conforming to the male form of the Giant sloth.  There is no confusion either.   This now locates them in Manitoba.  I have had them in the Great Lakes District and this is just on the edge.

We get here the bipedal stance, but this creature is just as comfortable on four limbs.  This animal has full claws on all limbs.   It is never to be approached even armed. You have no idea what you face and unfortunately it is an ambush killer that may mean from fifty yards.

I suspect that hunters have been disappeared by this creature. and the remains buried.  The capability certainly exists in spades.

I received this sighting report over the span of a month or more. Much of it needed to be removed in order to publish (by request of the witness). The content is a bit general, though I sense that the witness really did observe something unusual:


I saw something that put a big scare into me. I'm going describe it - not sure you'll believe it, but I'm certain about what I saw that day.

This happened in August 2009 as I was driving to my husband's place of employment. We live in Gillam, Manitoba and he is an electrician for one of the generating stations on the river. It was close to 3 PM.

I had just turned off one of the residential roads near my home heading east on PR280. About a 1/2 mile after my turn, I caught a glimpse of something tall moving through the trees to my right. Then suddenly, it jumped onto the shoulder of the road and stood there as I drove by. I looked in the mirror and saw it quickly cross to the other side of the road. I picked up speed and didn't stop until I reached the station. I had chills all over.


I got a decent look at it. It had a large wolf head, but it was standing upright on legs which looked man-like. I didn't see arms as I passed by, but I did see arms swaying back and forth when I looked in the mirror as it crossed the road. The coloring of the head and body hair was charcoal with darker patches. If it was an actual gray wolf, then it was the largest one I had ever heard of. I thought that someone was playing tricks, but that wouldn't make sense since (I think) it was during the hunting season.


I did tell my husband, who later checked the area where I saw it. He said that there were reports of a very large wolf along the river a year or two before, but he had not heard anything beyond that. I still don't know if he believes me.


I also said something to my uncle (through marriage) who is Chippewa. My uncle told me that it was not a ma'iingan (wolf) and that I must forget about it. He then recited some words under his breath and told me not to mention it again. That kind of freaked me out.


Since it was 5 years ago, I haven't thought much of it - until I read a newspaper article about the dogman and sightings people had in other locations. That's how I found you online. I have a few questions, if you'd consider emailing me. Thank you - SB


NOTE: I contacted SB by email in mid-December and just received a response on Wednesday...then another response on Thursday. She wanted to know what I thought of the sightings in the newspaper and internet. I referred her to several of Linda Godfrey's books and mentioned that I would forward her information to Linda as well. SB agreed to having her experience published...though personal information was removed. She stated that the being was about 8 ft tall with a huge, wide head.


I tend to be a bit more cautious with bipedal canine reports. To be frank, there have been several narratives I've received over the years that didn't quite pass the 'smell test.' This can happen with any unexplained phenomena submission...but it seems more prevalent when the subject is cryptid canine.


That being said, I truly think SB believes she witnessed some form of supernatural creature. Lon
Posted by arclein at 12:00 AM