Here is something quite different.  It may even be the remains of a couple of young left behind.  I think that this is closest to bat morphology so far.  The skull is not totally out of place, but it is also exceptionally large.  The sharp curve to the fangs must be noted.  They would certainly facilitated sucking blood out of an artery.

I keep expecting bat like wings but that has not shown up.  Otherwise those feet and body size could easily be mistaken for an ordinary house cat.  This easily explains the failure to track.

Yet what i am seeing here is a very convincing killer that easily leaps aboard a much larger animal to penetrate the large arteries feeding the neck.  No  flying is really necessary.  The animal almost instantly collapses and the creature commences feeding, perhaps joined by others.  This predator may be also much larger and thus rarer.  However small bands of these can easily explain even cattle mutilation if we work at it. 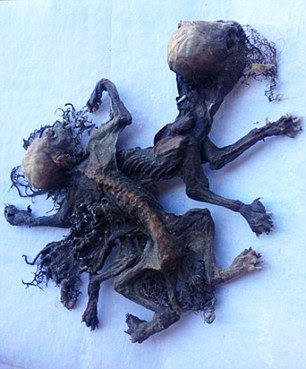 By Jennifer Newton for MailOnline

http://www.dailymail.co.uk/news/article-2921521/Farmer-says-remains-two-mysterious-Chupacabra-creatures-stumbling-bizarre-looking-dead-animals-Chile.html
A farmer has claimed he has found the remains of a two Chupacabra creatures also known as blood sucking monsters after stumbling across bizarre-looking dead animals in Chile.

Goat farmer Javier Prohens was having lunch with friends when terrified farmhand 54-year-old Bricio Saldivar alerted them to the bodies of the strange creatures on the outskirts of the small town of Monte Patria in the east central Chilean province Limari.

At first the group thought the remains were those of bats but on closer inspection, they became convinced they are from they mythical creatures.

The remains found by goat farmer Javier Prohens, who believes they could be the bones of a Chupacabra, a mythical blood sucking creature

Mr Prohens, 54, said: 'He was clearly scared and said he had been up at the old winery and found two strange bodies.

'When we got there we saw them lying among some hay bales in one of the cellars.

'At first we thought they might be bats, but when we looked closer, we realised they had to be something else as the heads were too big for bats.

Translated into Spanish as 'goat sucker' Chupacabras are reptile-like mythical creatures with leathery and scaly green-grey skin with sharp pins and quills running down its back.

They are said to be four foot tall and hop like a kangaroo, while living in Central and South American countries.

The name comes from the monster's habit of attacking and drinking the blood of livestock, especially goats. 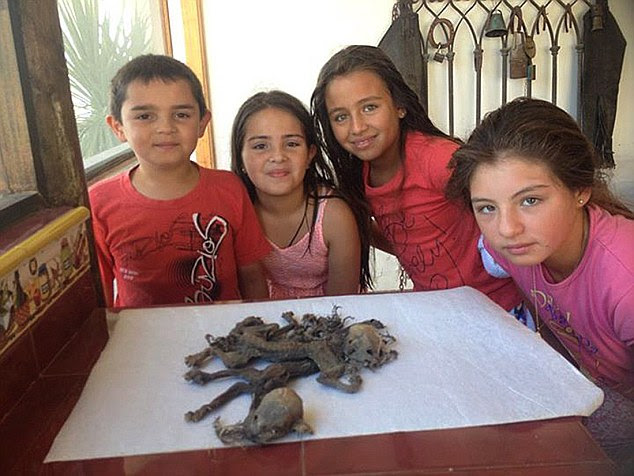 +1
Local children crowd around the remains found by the goat farmer. The discovery has worried other farmers in the area who are concerned about the safety of their livestock

And now the find has sparked fears among other farmers in the nearby area.

Querubin Lebron, 38, said: 'Our livelihoods are built on goat farming. There are lots of goats here.
'Although it's said they only attack animals, who knows it is won't attack our children too.'

In April last year, a couple from Texas claimed they had captured a Chupacabra in their back garden.
However, after an investigation, it was established that the creature was a raccoon suffering from scabies.