Research finds Neanderthals Were More Thoughtful Than we once Imagined 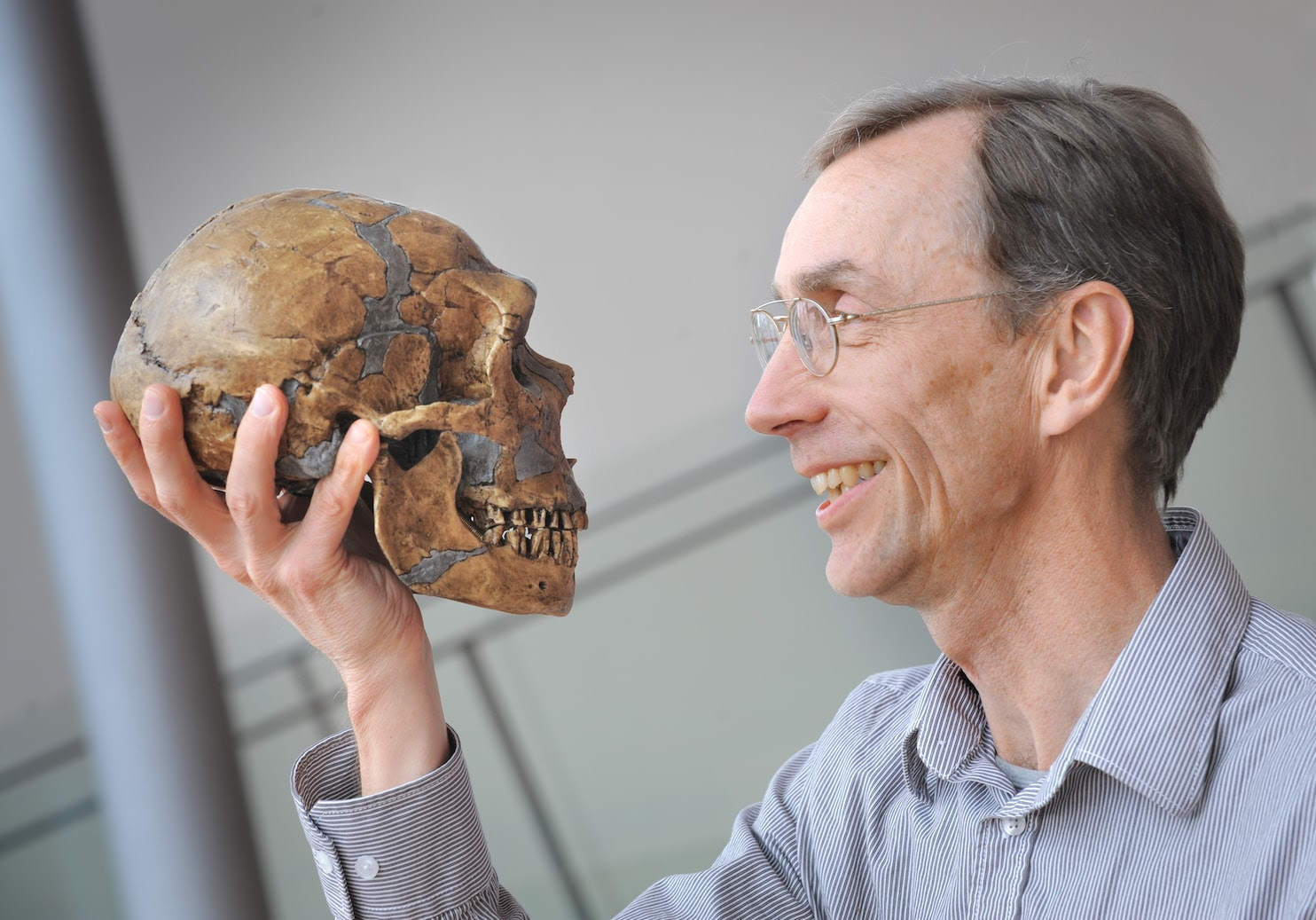 I actually have high expectations for neanderthal intelligence.  By that of course, i do mean baseline intelligence without the cultural supercharging we are exposed to.  Everything else points to a successful hunting band society well adapted to deal with the Pleistocene.  What they did not have is the 150 person village, likely because they did well enough without.

Once the human village showed up simple absorption was inevitable by sheer weight of numbers.  A human war band could drive of the handful of men and capture the women far more often that the other way around.  We even had something happen like that to an Altai wild women in living memory.  Her children are hybrids and her grandchildren will breed back into our general population.

Mankind's global success with the village has allowed mankind to absorb all primitive cousins.  We have a handful of hold outs out there but the truth is that their absorption is inevitable.  It will not even take long now because there is no isolation anymore, even contrived. .

Research finds Neanderthals were more thoughtful than we once imagined

Maybe it’s their famously protruding brow ridge or perhaps it’s the now-discredited notion that they were primitive scavengers too dumb to use language or symbolism, but somehow Neanderthals picked up a reputation as brutish, dim and mannerless cretins.
Yet the latest research on the history and habits of Neanderthals suggests that such portrayals of them are entirely undeserved. It turns out that Neanderthals were capable hunters who used tools and probably had some semblance of culture, and the DNA record shows that if you trace your ancestry to Europe or Asia, chances are very good that you have some Neanderthal DNA in your own genome.
The bad rap began when the first Neanderthal skull was discovered around 1850 in Germany, says Paola Villa, an archaeologist at the University of Colorado. “The morphological features of these skulls — big eyebrows, no chin — led to the idea that they were very different from us, and therefore inferior,” she says. While the majority of archaeologists no longer believe this, she says, the idea that Neanderthals were inferior, brutish or stupid remains in popular culture.

Neanderthals first appeared in Europe and western Asia between 300,000 and 400,000 years ago. They are our closest (extinct) relative, and their species survived until 30,000 to 40,000 years ago, when they vanish from the fossil record, says Svante Paabo, director of the Max Planck Institute of Evolutionary Anthropology in Leipzig, Germany, and author of “Neanderthal Man: In Search of Lost Genomes.” Why these relatives of ours thrived for so long and then ended their long, successful run about the same time that modern humans began to spread remains a point of debate and speculation. 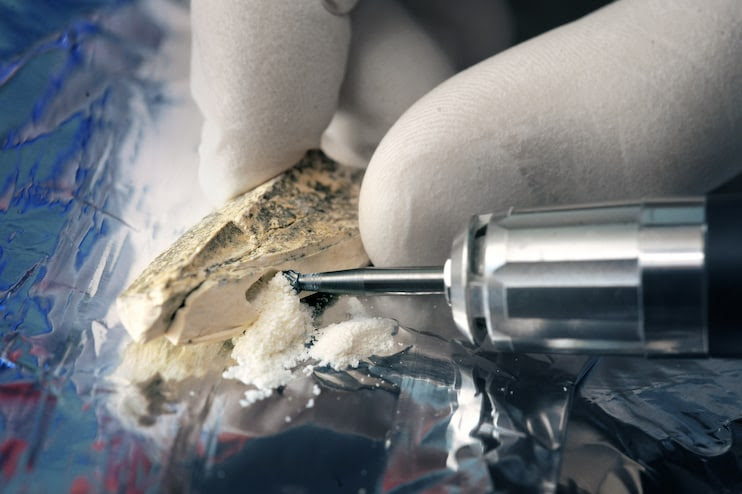 The research team used only a total of 400 milligrams of bone powder for their analysis. (Frank Vinken) 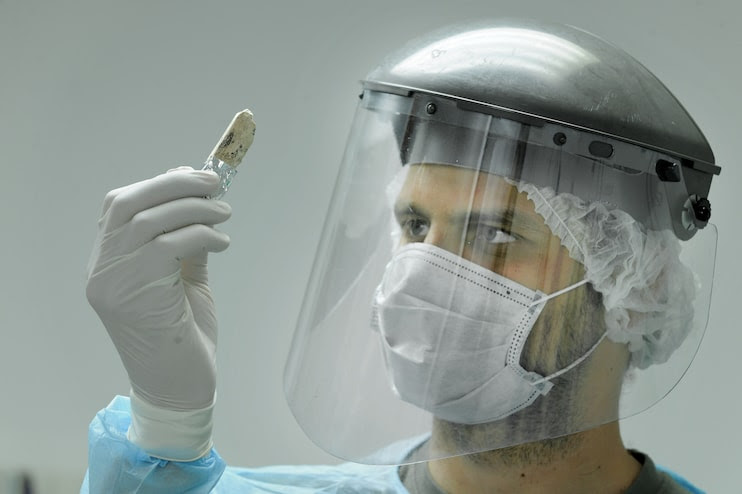 One theory holds that Neanderthals went extinct because they were inferior to the modern humans they encountered. But in a paper published in PLOS One last year, Villa and Wil Roebroeks, an archaeologist at Leiden University in the Netherlands, conclude that a comparison of Neanderthals and modern humans simply doesn’t support what they call the “modern superiority complex,” or the notion that Neanderthal were inherently inferior to the modern humans who overlapped with them.
Compared with humans today, Neanderthals were shorter, stockier and heavier built, with bigger bulges on their bones where muscles attach. But there’s no reason to think that they were dumb, Villa says. Their brains were actually slightly larger than ours, and archaeological sites have turned up evidence that Neanderthals used personal ornaments including bird feathers, claws and shells smeared with ochre. The use of such ornaments supports the idea that Neanderthals were capable of symbolism and abstract thought, Villa says.

Some of them may have been artists. In September, a research team working in Gibraltar (a British colony at the southern end of Spain) published a description of a rock engraving found in a cave that they say is the first known example of Neanderthal art. The engraving consists of multiple crossed lines that were created, the researchers write, “by repeatedly and carefully passing a pointed lithic [stone] tool into the grooves, excluding the possibility of an unintentional or utilitarian origin.” The engraving, the researchers say, demonstrates a Neanderthal capacity for abstract thought and expression.

They also appear to have buried their dead. In a study published in the Proceedings of the National Academies of Science last January, researchers document evidence from the La Chapelle-aux-Saints archaeological site in France showing a Neanderthal burial site. 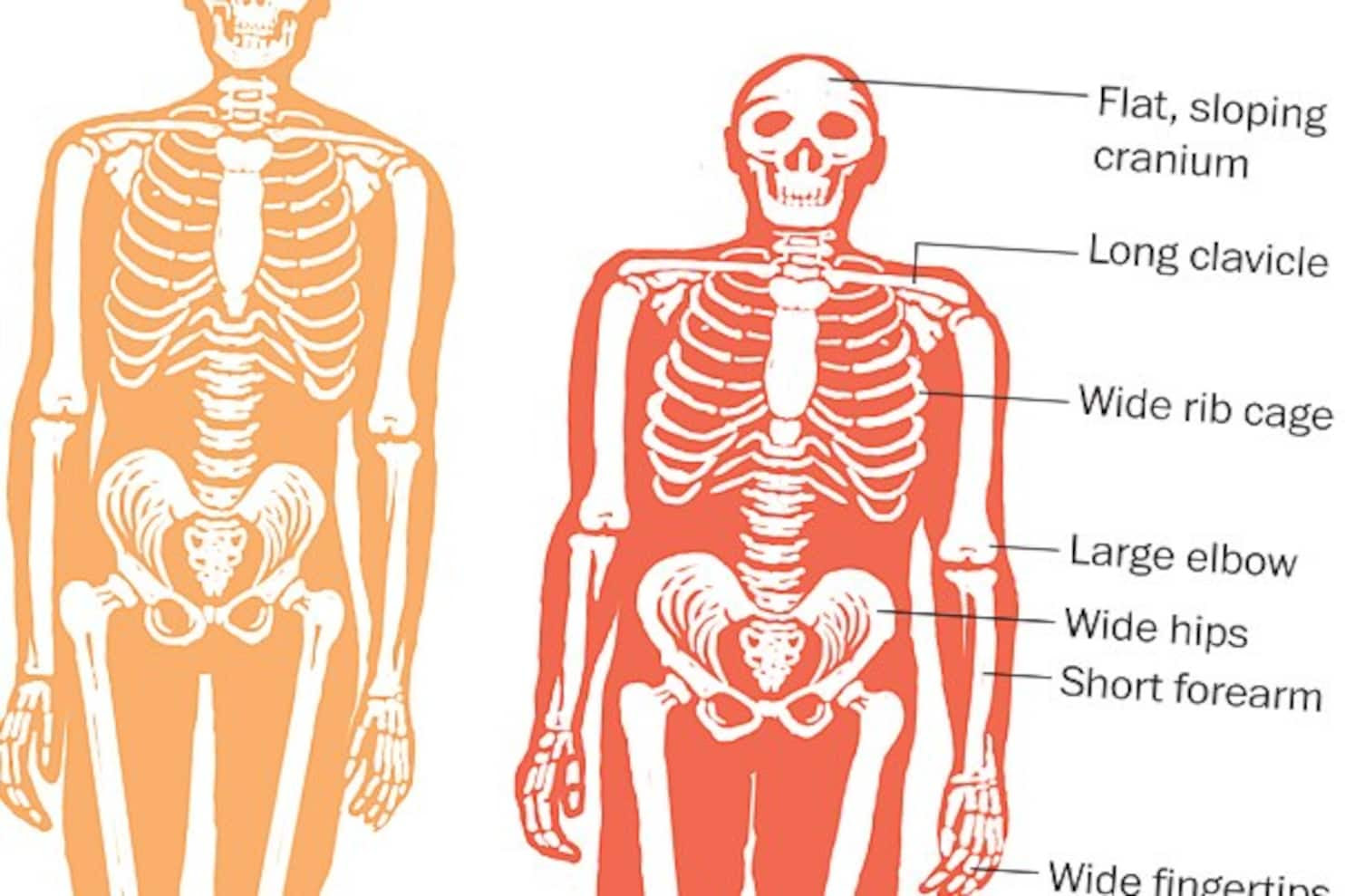 Except for Africans, modern humans bear a trace of Neanderthal ancestry. View Graphic
Twisted fibers found on stone tools at another French site suggest that Neanderthals knew how to make string or cordage, and six stone arrowheads recovered there imply that they also used complex projectile techniques — tasks that would require advanced thinking.

Starting about 200,000 years ago, Villa says, European Neanderthals used tools made with pitch, a glue material that doesn’t occur naturally but must be synthesized from tree bark. Modern experiments show that producing pitch with the resources available to Neanderthals requires a high degree of technical knowledge.

Once thought to be scavengers incapable of hunting, they actually were accomplished big-game stalkers who thrived by hunting a wide range of animals in a variety of environments, the latest research shows.

Along with the idea that they were scavengers came the notion that Neanderthals ate a very limited diet, consisting mostly of large or medium-size mammals — dietary constraints that would have left them less adaptable to changes in the environment than early modern humans. But research simply doesn’t bear this out.

Luca Fiorenza, a palaeoanthropologist at the University of New England in Australia, has examined the teeth of Neanderthal fossils found in Italy and found evidence that they were consuming shellfish, seeds and probably wild plants.

The advent of advanced DNA technology has added a rich new layer to our understanding of Neanderthals and their relationship to us. In 2010, Paabo, who heads the Neanderthal Genome Project, and a large group of colleagues published the first draft of the Neanderthal genome, and in early 2014 another research team presented genome sequences from DNA extracted from the toe bone of a Neanderthal fossil found in Siberia. 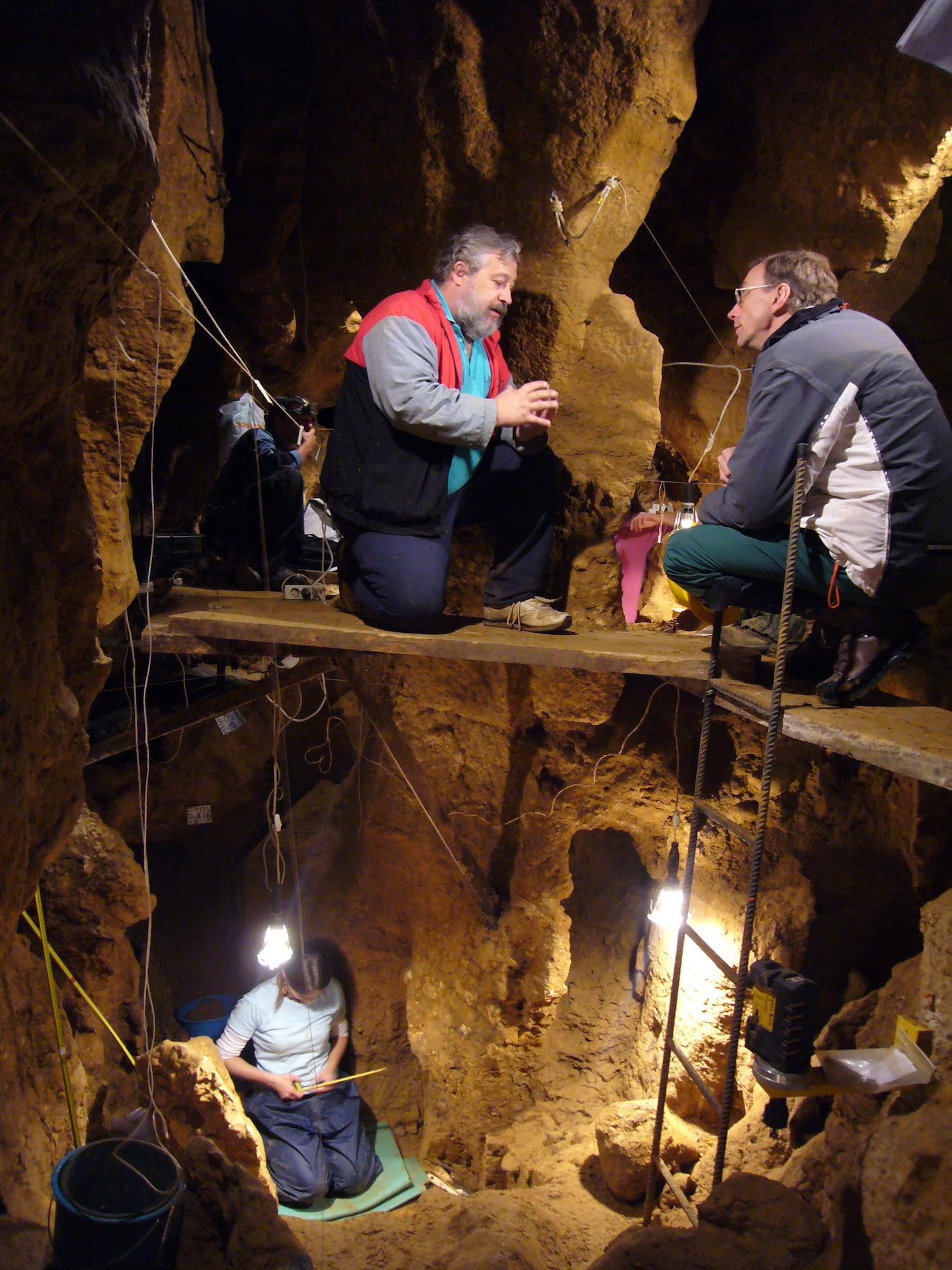 “Neanderthals are the closest evolutionary relatives to present-day people,” Paabo says, and the DNA evidence shows that some of our ancestors didn’t just overlap in time with the Neanderthals, they also bred with them.

“It’s quite clear that Neanderthals have mixed with modern humans,” Paabo says, contributing on the order of 1 to 2 percent of the DNA found in people living today who trace their roots to Europe or Asia. “We now have a quite good date for when this mixing happened — somewhere between 50,000 and 60,000 years ago — right about the time that modern humans expand out of the Middle East and Africa to colonize the rest of the world,” he says.

In March, a team that included Paabo published further DNA findings suggesting that human-Neanderthal intermixing may have decreased fertility in male Neanderthals, perhaps contributing to their disappearance. Given the timing, it seems reasonable to guess that Neanderthal’s extinction may have had something to do with the arrival of modern humans, Paabo says, but it’s not clear whether modern humans killed them off or simply outdid them in the competition for habitat.
Some people have theorized that modern humans displaced Neanderthals because they were somehow innately superior, but the evidence simply doesn’t bear this out, Villa says. The two species’ dietary habits and behavioral traits were not as dissimilar as originally thought. Most likely, there were probably multiple causes of the Neanderthals’ disappearance, she says. “People are beginning to accept the idea that Neanderthals became extinct, but not fully and completely, and the process took some millennia — it was not instantaneous.”

One thing is clear: Neanderthals never entirely vanished. “They live on a little bit in people today,” Paabo says.
Posted by arclein at 12:00 AM