Europa Is the Prize for Exploration 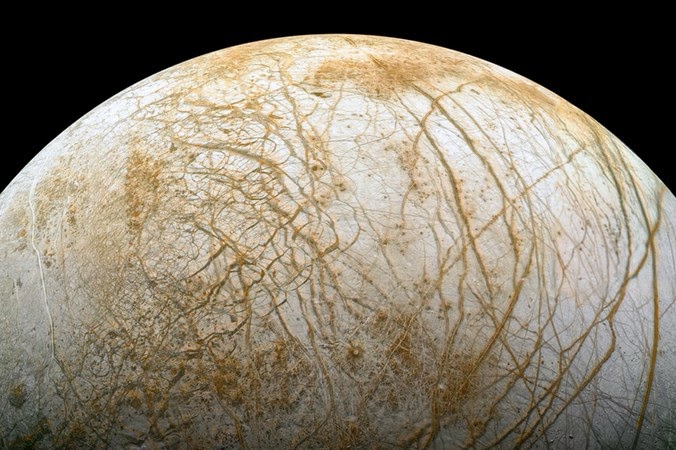 Now that we know how to tap Dark Matter for unlimited energy, getting to Europa will be not difficult at all.  This is even before we master gravity manipulation

All it takes a poweful mass driver that accelerates mass to an appreciable fraction of the speed of light or even a lot less.  What we want is a steady one g of acceleration to get there. We can even send tankers full of water while we do this to be on the safe side.

We know we can build a super conducting mass driver and now power it continuously.  We can then produce a plasma gas from water and fire it through the driver for acceleration.  One g is sufficient to lift of and leave earth at speed.

0ther fuels may be more attractive but we think that we have water in abundance were we are going.  My take home is that i think that we can design this power train right now without too much fuss.  I would rather use a gravity control system but that will take a lot of exotic engineering even after we succeed in figuring out how to do it.  In short it will take a minimum of twenty years.  A mass driver is already practically built for scientific work already so nothing is too tricky there.  We already have forty years of engineering in that.

Thus a one g accelerator will be design friendly and completely feasible.  Two years to a working prototype at today's engineering speeds and another two years to do the craft itself.  In short it can be done in five years if we push.  Then we can produce a number of craft to fully explore the solar system which at one g is quite feasible.  We can even pack a large crew and have ample space.

The Moon Was a First Step, Mars Will Test Our Capabilities, but Europa Is the Prize

The icy moon Europa is perhaps the most tantalising destination in our solar system. Scientists have been trying for years to kickstart a mission to Jupiter’s most enigmatic moon, with very Earth-like concerns over costs keeping missions grounded until now.

The European Space Agency’s ambitious mission to Jupiter, JUICE, will visit its fire-and-ice moons – volcanic Io, icy Europa, giant Ganymede, and cratered Callisto – in the 2030s. But it will only provide a glimpse of Europa’s surface from a couple of close flybys. With the announcement of the NASA-led Europa Clipper mission, now it looks like a much closer inspection of Europa is on the cards.

It’s hard to overstate the excitement among planetary scientists, after so many years of waiting in the wings while all eyes were on Mars. This is truly a quest to understand what makes a world habitable.

Europa is the smallest and smoothest of the four Galilean moons. At 1,940 miles across, it is roughly a quarter of the size of Earth, composed of a mixture of ices and rocks. When the Galileo spacecraft flew over Europa in the 1990s, it uncovered evidence of a global sub-surface ocean: vast, deep, dark waters hidden beneath the ice crust.

The water doesn’t freeze completely because it’s constantly kneaded by powerful tidal forces as the moon orbits around Jupiter once every 3.5 days. What’s more, the ocean is believed to be in direct contact with the surface ices and the moon’s silicate mantle, which brings together all the necessary ingredients for a habitable environment: liquid water, a source of energy, and a source of minerals/nutrients. We know that life on Earth can exist in even the most extreme environmental conditions (for example, bacteria known as extremophiles), so maybe – just maybe – Europa’s hidden ocean could support life.

The Galilean moons of Jupiter: Io, Europa, Ganymede and Callisto. (NASA)
What to Look For

Neither JUICE nor Clipper will reach the surface or the ocean below – that’s too great a technological challenge for now. But if habitable conditions for life are discovered beyond Earth, particularly somewhere as far from the Sun as Jupiter and its moons, this could mean that habitable conditions are commonplace throughout our universe.

We must begin to explore Europa via orbital reconnaissance: to image and perform spectral analysis of the composition and geology of the surface, and the radiation, magnetic, electric and plasma fields that sweep across it. With ice penetrating radar we can probe through the icy crust, even as far as the hidden ocean to understand the forces that shape this icy world.

Europa’s fractured and cracked surface is geologically quite young, and relatively crater-free. The structures that the Galileo probe observed from orbit suggest freeze-melt processes that trap icy burgs into frozen seas, creating the scarred patterns known as chaos terrain. Dark parallel ridges criss-cross the bright planes, possibly due to tectonics or other geologic processes.

Most surprising was Hubble’s observations in 2012, which showed evidence of huge plumes or geysers erupting tens of kilometres over Europa’s south pole, potentially contributing to a very thin atmosphere. If we could directly sample those plumes we might just get a glimpse of the composition of the deep ocean.

Sooner Rather Than Later

So for all these reasons and more, Europa remains the highest priority target for a future mission. That there are two missions to the Jupiter system stems from years of study within NASA and ESA. At one point a joint mission, the Europa-Jupiter System Mission, was planned but was not taken forward due to funding constraints.Today, JUICE is full-steam ahead, the project having passed through a full study and definition phase towards now building the spacecraft. If all goes to plan it would launch in 2022 and reach Jupiter in 2030. After two years of multiple fly-bys exploring Jupiter, its moons, rings and magnetosphere, it will become humankind’s first orbiter of an icy moon, targeting Ganymede in late 2032. If NASA’s recently announced funding is confirmed Europa Clipper may proceed even faster, using a new rocket (the Space Launch System) to propel it towards Europa in only a few years, potentially arriving just before or even at the same time as JUICE.

Clipper will conduct multiple flybys of Europa (maybe 45 or more over three years) without entering orbit directly, but will provide the high-resolution reconnaissance necessary to ultimately choose a landing site for some future robotic explorer. Although that future landing mission is beyond the funding horizon right now, it’s exciting to think that we’ll one day see images from that icy and harsh environment, with Jupiter suspended in the black skies above.
Posted by arclein at 12:00 AM