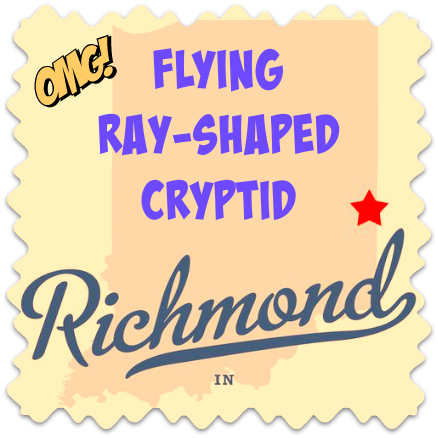 This is not the first such story and we actually have seen several.  What has been lacking is any form of a credible explanation.  At the same time on a deeper level we do not have a good explanation for the manta ray itself.

Yet we now know that ordered planar Dark Matter can be used to manipulate gravity.  We are actually doing it.  All of a sudden the geometry of the manta ray makes real sense as it provides a kite like layer of contained dark matter that can be charged in order to provide a change in gravitational effect.

By charging up a manta ray can leave water and use its control of gravity to essentially swim through the air in the same way as it swims in the sea.  Why it may do this is not known, but  observation shows us that it can and will.  I love it when we go from dismissing a story as impossible to finding out that it can be possible with facts superior to any other explanation for the mere existence of the creature in the first place.

Once again, I have received an eyewitness sighting report of a flying ray-shaped cryptid. Are these flesh and blood creatures...or some type of bio-engineered UFO? This is still a very bizarre phenomenon:


This is very hard for me to publicly write about. It was so, so strange and I have only told a few people because they just think you are crazy - when you tell them you 'saw a sting ray fly over the street from one bunch of trees to another.' I mean we are in Indiana – nowhere near the ocean for one thing but even if we lived by the ocean, why would a sting ray fly into trees?


Anyway, this is what I saw on my way to work one early fall morning around 6:30am – still not all the way light out but light enough, plus there are street lights up and down the way I drive to work. I am coming up to a 4 way stop, no cars around so I go. I am looking downhill kind of, following the street and seeing no cars. I kind of glance up a bit and see this huge sting ray looking thing fly from one side of the street, kind of like out of a group of trees and going over the street into another group of tree tops! I was astonished is the only word I can think of to described it – never had much of a reason to use that word but that sums it up! I was like OMG! OMG! Well I started praying Lord what was that? It was so weird. I felt like I wanted to cry. I was kind of afraid, many emotions ran through me after the initial astonishment. I kept asking myself did I really see what I just saw, over and over all the way to work. I kept thinking 'ok – did that just happen?!?!'

Well for days I could not stop thinking about it so I told a couple of people and they don’t believe me - I know. Well I started to look at pictures on the internet to see what I might compare it to and I come across this huge Manta Ray picture andunderneath it says “Devil Ray!’ SO then I look up on the internet some things about demonic creatures slash sting rays and I come up with this whole bunch of stuff about water spirits so that is what I really think it was. For one brief moment I saw a demonic water spirit that has the form of a sting ray. Our town has been known to give people the feeling of a demonic hold or something and now I believe it. This town has all kinds of problems and if you look up these water spirits you can see what they bring. Anyway – that’s what I saw and now I am seeing you have others that have seen the same thing. This makes me so happy that I am not CRAZY! Have you seen the strange creature in the tsunami video? I think that is the same thing! Thank you for posting these sightings. TS


I contacted the witness and received more information:

It was grayish (shark-like) gray on top and whiter on the bottom, but it looked just like a giant sting ray gliding over the street. We lived in Florida for years and there are a lot of petting places that have star fish, sharks, turtles and sting rays so I have seen these things up close. It is hard to explain but you know how the edges of a sting ray like wave as it glides through water, well the edges of it were doing the same thing but through the air. I barely saw the long tail thing from the back as I was watching the edges of it wave and glide.

There is a river (East Fork - Whitewater River) – if you continue down E street west you would run in to it. Which would be S 1st Street. I go over the bridge to my work

NOTE: The area of the sighting is a mix of residential & commercial properties on a two-lane road. The witness' description mirrored that of an actual Manta Ray...with very little deviation. It's unusual for one of these cryptids to be seen in populated location...but I truly feel the witness observed what she described. Lon
Posted by arclein at 12:00 AM