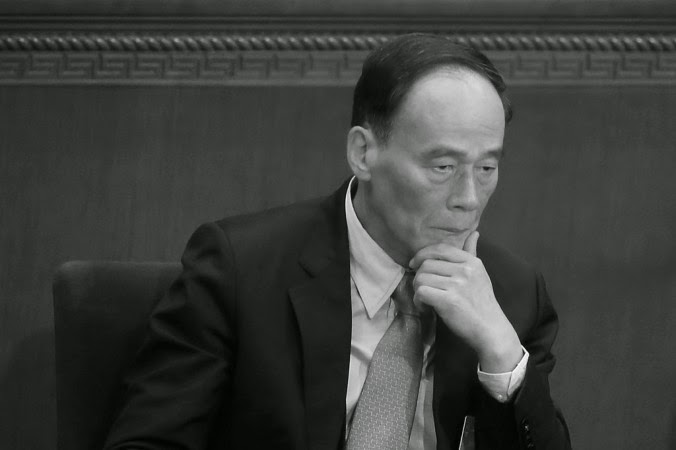 Let it be said that the pigs had a great run.  Now the new regime is applying a badly needed dose of reality to all cadres and taking out the top tier at least of the insanely greedy as a demonstration to the others.  This also supplies ample cover to eliminate the bloody hands faction which was a true threat to internal stability and cleanses the body politic for a generation perhaps.

Yet none of this is true reform but it is spring cleaning.

In the meantime, they also are discovering just what is actually working out there.  This means that all the ponzi schemes can be liquidated and the successful efforts protected.  All this means a long time of economic digestion rather than dynamic growth.  It also means internal rationalization which is also overdue.

Add in a rising demos at the local level, unfortunately not been sponsored by the government and we can continue to be optimistic.  China is a great market for wine and vineyards.
.
Setting a Trap for China’s Corrupt Officials

Investigators stage arrests for maximum intimidation, while working to keep the target alive


Wan Qingliang might have thought everything was going his way the morning of June 27, 2014.


The then-head of the Chinese Communist Party (CCP) in Guangzhou, the capital of southern China’s Guangdong Province, was due to take part in a high-profile meeting at the provincial government building. Waiting for him outside were his subordinates from the Guangzhou municipal government building, who would accompany him after the meeting to inspect a school.


Inside the meeting, things changed for Wan. The provincial party secretary would not allow Wan to speak during the discussion. Then came the arrest in front of the province’s top officials by the investigators from the CCP’s feared anti-corruption unit, the Central Commission for Discipline Inspection (CCDI).

The targeted official is likely to let down his guard because he is thinking so highly of himself.


The take down of Wan is described in an article that appeared on Feb. 2 in People’s Net, the online publication of the CCP mouthpiece People’s Daily. The arrest of Party officials for corruption is calculated to have maximum impact on Party members, but suicide is a complication the corruption hunters must guard against.


According to People’s Net, the tactics used in arresting Wan are typical. The corruption busters often set up an important meeting from which the targeted official is very unlikely to be absent. Of course, for such a meeting to go smoothly without alarming the targeted official, his superior must cooperate fully.


“The targeted official is likely to let down his guard because he is thinking so highly of himself for attending such a meeting,” stated the article. “The crime busters would be waiting outside to respond, monitoring the event through surveillance cameras and text messaging from somebody inside the meeting.”


“All of the moves [in the arrest of Wan] were designed to leave a dent in the ego of every single local official who was present,” stated DWnews, a U.S.-based Chinese-language news website.


The celebration of the work of the CCDI in the state-run media is part of an ongoing anti-corruption campaign of unprecedented scope ordered by Party boss Xi Jinping. Over the past two plus years, tens of thousands of Party officials have been investigated and big “tigers”—top ranking Party officials—who were thought immune have been rudely taken down.


In a September 2014 article, CCDI head Wang Qishan said the ambition of his corruption busters is to bring officials to the point that they “don’t dare to commit corruption, cannot be corrupt, and don’t want to be corrupt.”


A Feb. 2 article by the regime mouthpiece Xinhua echoed Wang’s remarks and noted that “Catching the tigers is a way to intimidate others.”
Mentally Weak


Yang Hongwei, deputy party secretary of Chuxiong Yi Autonomous Prefecture in Yunnan Province in central China, was frightened and fell to his knees when the CCDI showed up, according to People’s Net.


Yang Weize, a provincial level-official working as party secretary of Nanjing, the capital of eastern China’s Jiangsu Province, was running towards a window to commit suicide when the CCDI appeared. The investigators grabbed Yang and pinned him to the floor.


“It would be a huge loss for the anti-corruption campaign if we were to lose such a provincial-level official (to death),” stated the article in People’s Net.


Catching the tigers is a way to intimidate others.

The article also calls on the CCDI to be alert and on their feet when transporting officials by either plane or train.
Reasons for Committing Suicide


The suicide rate among Chinese officials has been climbing, although there are no public records of official suicide. 77 people killed themselves in the years 2013 and 2014 compared to 68 in the period from 2003 to 2012, as reported by Peng Pai, a new-state-funded online media outlet, on Jan. 31.


Another state-controlled news outlet, China Youth Daily, reported that between the January 2013 and April 2014, there were 54 cases of unnatural deaths, of which 23 were suicides.


Nei Huihua, deputy director of National Academy of Development and Strategy at Renmin University of China in Beijing, stated that there is certainly a positive correlation between the number of unnatural deaths and the ongoing anti-corruption campaign, reported the Chinese business magazine Caixin on Feb. 2.


“To cover up the crimes, to protect your fellow Party members, protect one’s own family, and the lack of faith in the Chinese judicial process are the reasons for committing suicide,” said Professor Nei.


In a blog post in May 2014, a netizen nicknamed “Muran” further clarified the reasons officials take their own life.


When an official takes his own life, his family would continue to enjoy the illicit wealth accumulated by the official. So, the official probably has made all the necessary arrangements prior to killing himself.


An official might also be coerced into taking his own life, since threats to the safety of his family and others whose vested interests are closely tied to him might be used against him.


In addition, what appears to be a suicide might in fact be a homicide since others, to cover up their own tracks and for fear of being implicated, might kill an official whose crimes have already been detected.
Posted by arclein at 12:00 AM