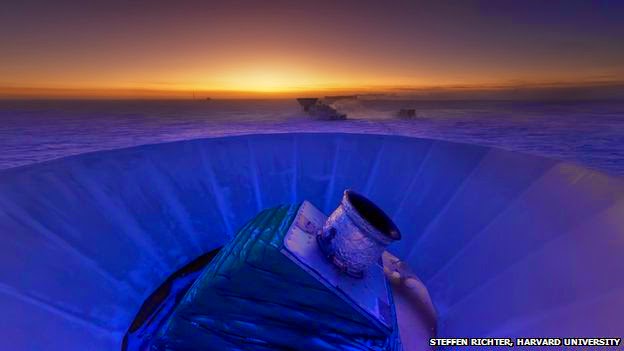 I personally had low expectations for the so called primordial signal, as in not expecting any such thing.  Thus elimination the BICEP conclusion is a positive.  I really do not expect them, to get lucky here.

In my Cloud Cosmology, expansion is at the speed of light beginning from a first movement well described and rigorously defined in my posting march 7 of 2013.  Everything after is geometric decay producing fundamental particles all of which progress to agglomeration and decay into larger particles on to ultimately the physical structure of our universe.   Asymmetries will arise to provide texture as this progresses and ultimately we have galaxies.

Thus I expect a uniformity while leaving open the possibility of geometric surprise that has to wait for geometric simulation to predict.


The measurements were taken using the BICEP2 instrument at the South Pole Telescope facility
Scientists who claimed last year to have found a pattern in the sky left by the super-rapid expansion of space just fractions of a second after the Big Bang were mistaken.
The signal had been confounded by light emission from dust in our own galaxy.

This is the conclusion of a new study involving the US-led BICEP2 team itself.


A paper describing the findings has been submitted to the peer-reviewed journal Physical Review Letters.


A summary was briefly posted on an official French website on Friday before being pulled. A press release was then issued later in the day, although the paper itself is still not in the public domain at the time of writing.


A determination that BICEP2 was mistaken in its observations is not a major surprise.


The team itself had already made known its reduced confidence in the detection. But the new paper is significant because it is co-authored by "rival" scientists. These are the Planck Consortium of researchers, who were operating a European Space Agency (Esa) satellite that had also been seeking the same expansion pattern.


It was on the website of one of this satellite's instrument teams - its High Frequency Instrument (HFI) - that the outcome of the joint assessment was briefly leaked on Friday.


All the unified effort can do, according to the Esa press release, is put an upper limit on the likely size of the real signal.


This will be important for those future experiments that endeavour to make what would still be one of the great discoveries in modern science.


Issues of confusion BICEP2 used extremely sensitive detectors in an Antarctic telescope to study light coming to Earth from the very edge of the observable Universe - the famous Cosmic Microwave Background (CMB) radiation.


It was looking for swirls in the polarisation of the light.


This pattern in the CMB's directional quality is a fundamental prediction of "inflation" - the idea that there was an ultra-rapid expansion of space just fractions of a second after the Big Bang. 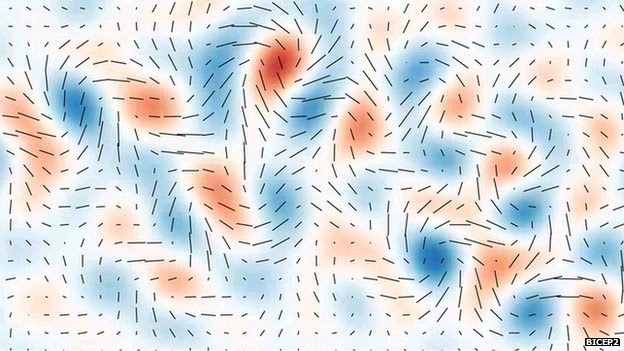 The twists, known as B-modes, are an imprint of the waves of gravitational energy that would have accompanied this violent growth spurt almost 14 billion years ago.

But the primordial signal - if it exists - is expected to be extremely delicate, and a number of independent scientists expressed doubts about the American team's findings as soon as they were announced at a press conference in March 2014.

At issue are a couple of complications. One is an effect where a "false" B-mode signal can be produced on the sky by the CMB passing through massive objects, such as huge galaxies. This so-called lensing effect must be subtracted.

But the second and most significant issue is the confusing role played by foreground dust in our galaxy.

Nearby spinning grains can produce an identical polarisation pattern, and this effect must also be removed to get an unambiguous view of the primordial background signal.

Bright dust The BICEP2 team used every piece of dust information it could source on the part of the sky it was observing above Antarctica.

What it lacked, however, was access to the dust data being compiled by the Planck space telescope, which had mapped the microwave sky at many more frequencies than BICEP2.

This allowed Planck to more easily characterise the dust and discern its confounding effects. The Planck Consortium agreed to start working with BICEP2 back in the summer. The European group incorporated its high frequency information - where dust shines most brightly - and the US team added additional data collected by its next-generation instrument in Antarctica called the Keck Array.

However, the results of the joint assessment would suggest that whatever signal BICEP2 detected, it cannot be separated at any significant level from the spoiling effects. In other words, the original observations are equally compatible with there being no primordial gravitational waves.

"This joint work has shown that the detection of primordial B-modes is no longer robust once the emission from galactic dust is removed," Jean-Loup Puget, principal investigator of Panck's HFI instrument, said in the Esa statement.

"So, unfortunately, we have not been able to confirm that the signal is an imprint of cosmic inflation."
Ongoing quest This is not the end of the matter. Other experiments are still chasing the B-mode signal using a variety of detector technologies and telescopes.

These groups will have learnt from the BICEP experience and they will all devour Planck's latest batch of relevant data products when they start to be published next week.

Like any field of scientific endeavour, advances are continually being made.

One of the ironies of this story is that BICEP itself may now actually be best paced to make the ultimate detection of the cosmic inflation pattern.

Although the past year, with its quashed claim, will have been painful, the team will have new insights.

What is more, it can still boast world-leading scientists among its members, and detectors that are universally acknowledged to be top-notch.