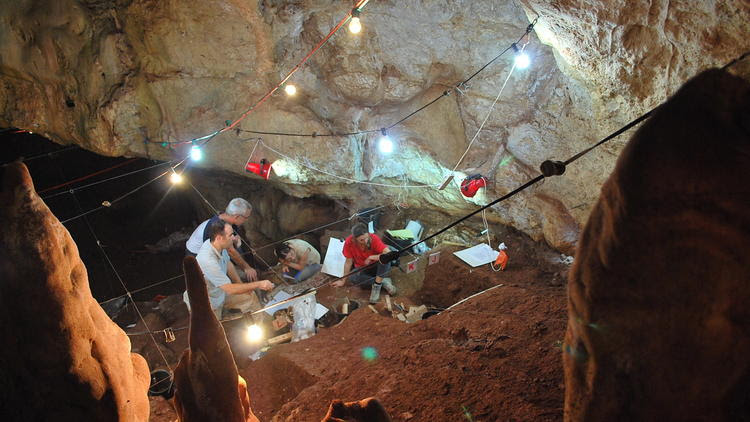 In Several Years we have gone from no expectation of any contact to understanding protracted content and intermarriage.  All this infers that a low population distribution of neanderthal hunting bands were simply absorbed into larger communities,  Thus we have significant neanderthal DNA in our genome.

I have no doubt that this happened to all isolated subspecies of humanity throughout the world.  The human advantage was simply villages of 150.  That easily did it.

Thus we have here an excellent opportunity to actually get such a snapshot in time and place.

It was sealed off from humanity for 30,000 years before sewer workers accidentally shattered its high, vaulted ceiling and allowed Israeli searchers to rappel into its dark interior.

Sweeping the cave’s damp walls and mineral spires with flashlights, the visitors discovered a trove of charcoal-smudged hearths, hundreds of animal bones and Stone Age tools. In one spot, they discovered the bowl-shaped fragment of a distinctly human skull.

Seven years after the discovery of Manot Cave in western Galilee, researchers argued in Nature on Wednesday that the 55,000-year-old skull cap may have belonged to a hypothesized group of modern humans who, after venturing out of Africa, associated and interbred with Neanderthals in the Middle East and then moved on to colonize Europe.
“Before now we had a theory, but we didn’t have the evidence. We didn’t have the smoking gun,” said lead study author Israel Hershkovitz, a professor of anatomy at Tel Aviv University. “This is the first specimen that connects the continents.”

In recent years, analysis of DNA extracted from Neanderthal bones has shown that roughly 2% of the genomes of all non-African people today derive from our robust extinct relatives.
This evidence of inter-breeding marks a reunion of sorts: Modern humans and Neanderthals shared a common ancestor in Africa more than half a million years ago before pursuing separate evolutionary paths.
But whether or not this reunion actually occurred in the Levant, Europe or Asia remains a matter of debate. Evolutionary geneticists say it most likely occurred 50,000 to 60,000 years ago – a time when the Middle East was likely a Stone Age crossroads for modern humans and Neanderthals.

Hershkovitz and his colleagues used radiometric dating techniques to estimate how long cave minerals had been accumulating on the Manot skull, and then arrived at an age estimate – 54,700 years old, give or take 5,500 years.

Sophisticated Neanderthals may have made abstract art [Photos]

The estimate coincides exactly with the theorized mass movement of modern humans out of Africa, at a time when a wetter climate allowed them to penetrate Africa’s formidable desert barriers. However, the Manot skull is by no means the oldest evidence of modern humans in the region.
In Israel’s nearby Skhul and Qafzeh caves, researchers have uncovered early modern human remains that are 100,000 years old.

However, Hershkovitz and his colleagues argue that these remains represent earlier waves of humanity that departed Africa only to meet a dead end. For unknown reasons, they went extinct before they could travel to Europe or Asia,  researchers say.

They argue that the people who inhabited Manot fared much better, and likely co-existed with a pre-existing Neanderthal population there for up to 5,000 years.

“They were neighbors,” Hershkovitz said. “This is the only place, probably that Neanderthals were living side by side and interacting for a very long period of time.”
Although Hershkovitz and his colleagues say the skull fragment may well be the missing piece of a larger puzzle, other researchers said they needed more proof.

John Shea, a paleoanthropologist at Stony Brook University who was not involved in the study,  said he agrees that the skull belongs to a modern human, however that does not mean they mingled with Neanderthals.

The only solid evidence that modern humans and Neanderthals actually co-existed and interbred would be if their remains were discovered in the same area, he said. This is not the case at Manot.

“If these guys could truly tolerate each other’s presence -- humans and Neanderthals -- we ought to be able to find their remains enclosed in the same sedimentary deposits,” Shea said. “If we had two skulls, one with human morphology and the other Neanderthal, I’d say, ‘game over. You’ve won.’”

John Hawks, a University of Wisconsin anthropologist who was not involved in the study, said the find was very significant because it was the first modern human skull found at the time and place where “interesting exchanges between archaic and modern humans may have been happening.”

However, the find was more tantalizing than conclusive.

“I wish there were more,” Hawks said. “Unfortunately, this part of the skull does not tell us about the face, or really much about the adaptation of this person … Hopefully, they will find more evidence.”

Hershkovitz said that more research and perhaps more discoveries were forthcoming. Researchers are currently analyzing foot and chest bones recovered along with the skull fragment, and there are more than 32 feet of archaeological layering within the cave that has yet to be excavated.

The researchers hope too that they can obtain DNA from the skull – an achievement that might provide further evidence of interbreeding between the two groups. There was no guarantee however the ancient bone would yield genetic material.

“If we’re lucky enough to extract DNA from this skull, we will have an answer,” Hershkovitz said. “If not, we’ll never know.”
Posted by arclein at 12:00 AM