The Next Boat People 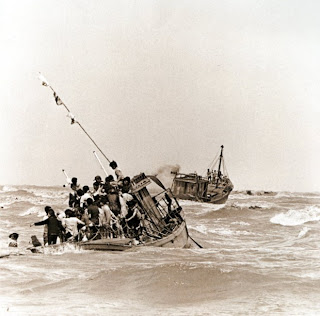 What is well forgotten is the Mid East is that the present regime of national borders were never art of a historical solution at all. They were established out of the Ottoman Dispensation as a parceling out of land to the two victorious imperial powers still standing in 1918. Do not think for a second that the deciding minds thought that this new regime was anything but permanent. It all was a natural continuation of centuries of history.

As all wise imperialists, they then empowered an ethnic minority whose loyalty was naturally forced to act as their cats paw. This plan always has a bad ending and we have had the joy of unraveling what was created.

What holds true for Syria and the Alawites today, also holds true for Lebanon, Jordan and Iraq. Iraq is now partially resolved and the rest are not. The best solution is also the most difficult in the short term and that is to set up individual homelands that are autonomous. Since the cultures are fairly similar. It would make good sense to establish a recognized Alawite city state, as well additional city states specific to other ethnic groups. What they represent is an escape hatch for any outbreak of tribalism.

These provide natural refugia if it becomes necessary.

Today Israel is a natural refugia for the Jewish people even though plenty of non jews work and live happily inside Is real.

Since the Alawites had a prior independent status, restoring it somewhat as a city state is fairly practical.

The next boat people

Syria’s Alawites may take to the sea, like the Vietnamese

If President Bashar al-Assad and his Alawite minority lose Syria’s civil war to the Sunni majority, as Western governments have predicted for more than a year now, the real bloodbath begins. The Sunnis, in revenge for four decades of often-murderous Assad family rule, are sure to seek retribution for the 20,000 brutally killed by Assad in the last 18 months; for the 10,000 wiped out by Hafez al-Assad, Bashar’s father, in a chemical-weapons massacre that put down a 1982 rebellion; and for the countless indignities and injustices throughout the period when the Alawite minority ruled over the Sunni majority.
Anticipating wholesale slaughter — calls for genocide against the Alawites abound — many if not most of the country’s two million-plus Alawites would flee in panic. Because Syria’s immediate neighbours to the north, south and east have neither the capacity nor the desire to accept large numbers of Alawites — seen as heretics by Sunni and Shia Muslims alike — many Alawites will take to the sea in an attempt to get to the West. This would create the greatest refugee crisis for the West since the end of the Vietnamese civil war in the 1970s, which saw the West first detain and then ultimately resettle more than one million boat people in the 1970s and 1980s.

A humanitarian disaster of epic scale is thus unfolding, one that would also strain Western budgets in this time of austerity — the cost of detaining Vietnamese refugees in the 1980s, when security was less of an issue, could cost as much as US$75,000 per person per year. Yet these looming costs, as well as the looming humanitarian disaster, are avoidable. Not under the West’s present strategy of regime change — replacing the Assad regime with a Sunni-led-coalition while keeping Syria’s borders intact – but by creating a state within Syria’s present borders for its Alawite population.

Such a state — called The Alawite State — actually existed after the First World War, when Alawites rebelled against French colonial rule over their homeland along the Mediterranean coast in a northwest corner of present-day Syria. With the blessings of the League of Nations, The Alawite State lasted from 1920 to 1936, when it joined Syria, a protectorate of various disparate minorities created by the Western colonial powers. Alawites — known for thr military prowess — later became powerful in the fascist Baath Party that has ruled Syria in a military dictatorship

That fascist Baath Party is now crumbling, as have other secular regimes in the Middle East, most of them artificial creations of the British and French in carving up the spoils of the Ottoman Empire. If the Western powers today were not adamant in preserving the country’s present borders, an Alawite state would be a likely outcome — the Alawites are in fact fortifying their traditional homeland, to allow them a retreat and, if necessary, a last stand. Syria’s Kurds are likewise fortifying traditional Kurdish parts of Syria, to protect themselves from bloodshed regardless of who ultimately assumes power.

But the West opposes a breakup of Syria, as do the governments of Syria’s neighbouring states — all fear the consequences of setting a precedent that encourages the national aspirations of the many other minorities in the Middle East. Local sectarian wars may well erupt in that grudge-filled part of the world.

Yet the consequences of insisting that Syria’s borders remain unchanged, and of forcing the Alawites and the Sunni majority to live together, are unconscionable: a continuation of the current killing of Sunni innocents at the hands of Assad’s Alawite forces, followed by a killing of Alawite minority innocents should the Sunni rebels win. In contrast, the case for quickly carving out an Alawite state is compelling, not least because it raises the prospects of a shortened and less reprehensible end to the current civil war.

Because Alawites don’t have a safe harbour in a state of their own, they are fighting furiously, and if necessary may resort to chemical weapons. If they do lose, and if the Sunni victors invade and overrun the Alawite strongholds, laying siege to the Alawite capital of Latakia on the Mediterranean, their backs will literally be to the sea.

Latakia, as the country’s largest port, will then oversee a large-scale evacuation of the populace by sea. And the West would oversee a refugee problem largely of its making.