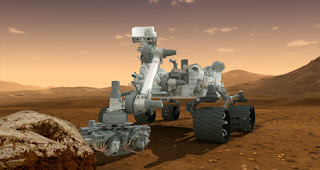 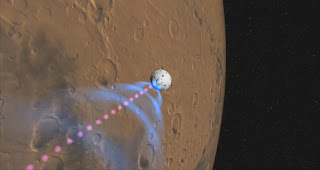 
NASA's Curiosity rover has landed on Mars! Its descent-stage retrorockets fired, guiding it to the surface. Nylon cords lowered the rover to the ground in the "sky crane" maneuver. When the spacecraft sensed touchdown, the connecting cords were severed, and the descent stage flew out of the way. The time of day at the landing site is mid-afternoon -- about 3 p.m. local Mars time at Gale Crater. The time at JPL's mission control is about 10:31 p.m. Aug. 5 PDT (early morning EDT).

I am now waiting for confirmation that it worked - a few minutes yet!
I heard somewhere that the delay would be around 8 minutes and we are at the fifteen minute mark.

I will add a note when i know for sure

Yes it is safely down and it is transmitting


PASADENA, California (Reuters) - The Mars science rover Curiosity landed on the Martian surface shortly after 10:30 p.m. Pacific time on Sunday (1:30 a.m. EDT Monday/0530 GMT) to begin a two-year mission seeking evidence the Red Planet once hosted ingredients for life, NASA said.
Mission controllers at the Jet Propulsion Laboratory near Los Angeles burst into applause and cheered as they received signals relayed by a Mars orbiter confirming that the rover had survived a make-or-break descent and touched down within its landing zone.
NASA described the feat as perhaps the most complex achieved in robotic spaceflight.
Moments later, Curiosity beamed back its first three images from the Martian surface, one of them showing a wheel of the vehicle.
"I can't believe this. This is unbelievable," said Allen Chen, the deputy leader of the rover's descent and landing team.
The car-sized rover apparently came to rest at its planned destination near the foot of a tall mountain rising from the floor of Gale Crater in Mars' southern hemisphere, mission controllers said.
The $2.5 billion Curiosity project, formally called the Mars Science Laboratory, is NASA's first astrobiology mission since the 1970s-era Viking probes.
The landing marks a major victory and milestone for a U.S. space agency beleaguered by budget cuts and the recent loss of its 30-year-old space shuttle program.
"It's an enormous step forward in planetary exploration. Nobody has ever done anything like this," said John Holdren, the top science advisor to President Barack Obama, who was visiting JPL for the event. "It was an incredible performance."
The exact condition of the one-ton, six-wheeled, nuclear powered vehicle upon its arrival could not be immediately ascertained.
NASA plans to put the rover and its sophisticated instruments, touted as the first full-fledged mobile science lab sent to another world, through several weeks of engineering checks before starting its two-year surface mission in earnest.
The landing capped a journey of more than eight months across more than 350 million miles (567 million km) of space since the Mars Science Lab was launched from Cape Canaveral, Florida.
(Editing by Stacey Joyce)
Posted by arclein at 10:46 PM