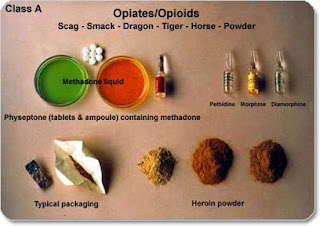 This is obviously a huge breakthrough and it may outright end opiate addiction. At least it will ameliorate the effects and allow a way more generous application of morphine therapy. It remains our best pain killer.

I also do not think we are too far away from resolving the other nasties a well, but having this one fall gives heart to all the others.

We are entering a world in which all forms of chemical imbalance can be identified and ultimately checked. You will go for an annual blood test and then be prescribed a treatment that re balances your system. With that abuses in food delivery will come under control. That means that a whole host of nasty conditions will simply disappear.

ScienceDaily (Aug. 14, 2012) — In a major breakthrough, an international team of scientists has proven that addiction to morphine and heroin can be blocked, while at the same time increasing pain relief.

The team from the University of Adelaide and University of Colorado has discovered the key mechanism in the body's immune system that amplifies addiction to opioid drugs.

Laboratory studies have shown that the drug (+)-naloxone (pronounced: PLUS nal-OX-own) will selectively block the immune-addiction response.

The results -- which could eventually lead to new co-formulated drugs that assist patients with severe pain, as well as helping heroin users to kick the habit -- will be published August 16 in the Journal of Neuroscience.

"Our studies have shown conclusively that we can block addiction via the immune system of the brain, without targeting the brain's wiring," says the lead author of the study, Dr Mark Hutchinson, ARC Research Fellow in the University of Adelaide's School of Medical Sciences.

"Both the central nervous system and the immune system play important roles in creating addiction, but our studies have shown we only need to block the immune response in the brain to prevent cravings for opioid drugs."

The team has focused its research efforts on the immune receptor known as Toll-Like receptor 4 (TLR4).

"Opioid drugs such as morphine and heroin bind to TLR4 in a similar way to the normal immune response to bacteria. The problem is that TLR4 then acts as an amplifier for addiction," Dr Hutchinson says.

"The drug (+)-naloxone automatically shuts down the addiction. It shuts down the need to take opioids, it cuts out behaviours associated with addiction, and the neurochemistry in the brain changes -- dopamine, which is the chemical important for providing that sense of 'reward' from the drug, is no longer produced." [Is there anything left? arclein]

Senior author Professor Linda Watkins, from the Center for Neuroscience at the University of Colorado Boulder, says: "This work fundamentally changes what we understand about opioids, reward and addiction. We've suspected for some years that TLR4 may be the key to blocking opioid addiction, but now we have the proof.

"The drug that we've used to block addiction, (+)-naloxone, is a non-opioid mirror image drug that was created by Dr Kenner Rice in the 1970s. We believe this will prove extremely useful as a co-formulated drug with morphine, so that patients who require relief for severe pain will not become addicted but still receive pain relief. This has the potential to lead to major advances in patient and palliative care," Professor Watkins says.

The researchers say clinical trials may be possible within the next 18 months.

This study has been funded by the National Institute on Drug Abuse (NIDA) in the United States and the Australian Research Council (ARC).