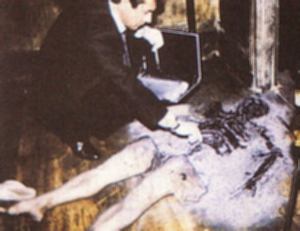 Firstly, difficult as it is to credit the phenomena, it is clearly real. Accepting the reality, and last year's event in Ireland dragged it into our present rather that old newspaper reports were creditability could be dismissed, the next step is for the prepared mind to propose a mechanism. Prof Ford has done just that.

The only thing left to do now is actual animal studies in which ketosis is induced. He has certainly shown that the mechanism works and will combust a living body.

The more serious take home is that a devoted fan of the Atkins diet needs to be conscious of this effect.

Obviously there are conditions in which we produce far too much acetone and are vulnerable to wicking the fat and burning up. Fortunately it is rare and obviously avoidable.

A Cambridge professor has tackled the issue of spontaneous combustion – using belly pork.
Prof Brian J Ford is a research biologist and author of more than 30 books, most about cell biology and microscopy but he has turned his attention to the mechanisms behind why people ‘explode’.


He said in an article in New Scientist: “One minute they may be relaxing in a chair, the next they erupt into a fireball.


“Jets of blue fire shoot from their bodies like flames from a blowtorch, and within half an hour they are reduced to a pile of ash.


“Typically, the legs remain unscathed sticking out grotesquely from the smoking cinders. Nearby objects – a pile of newspapers on the armrest, for example – are untouched.”


The first record of spontaneous combustion dates back to 1641 when Danish doctor and mathematician Thomas Bartholin described the death of Polonus Vorstius – who drank wine at home in Milan, Italy, one evening in 1470 before bursting into flames.


Since then more reports of spontaneous combustion have been filed and linked to alcoholism – though the link was later disproved.


The most recent case was 76-year-old Michael Faherty who died on December 22, 2010. West Galway coroner Ciaran McLoughlin recorded the cause of death as spontaneous human combustion.


Prof Ford wanted to disprove the alcoholism theory and also something called the ‘wick effect’ suggested by London coroner Gavin Thurston in 1961.


Thurston had described how human fat burns at about 250c, but if melted it will combust on a wick – such as clothes or other material – at room temperatures.


He wrote: “I felt it was time to test the realities, so we marinated pork abdominal tissue in ethanol for a week.


“Even when cloaked in gauze moistened with alcohol, it would not burn.


“Alcohol is not normally present in our tissues, but there is one flammable constituent in the body that can greatly increase in concentration.”


The body creates acetone, which is highly flammable.


He added: “A range of conditions can produce ketosis, in which acetone is formed, including alcoholism, fat-free dieting, diabetes and even teething.


“So we marinated pork tissue in acetone, rather than ethanol.


“This was used to make scale models of humans, which we clothed and set alight.


“They burned to ash within half an hour.


“For the first time a feasible cause of human combustion has been experimentally demonstrated.”