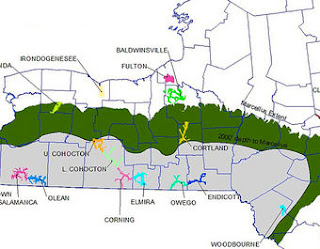 I have posted on this topic before, but today we have here an excellent update that now describes experience based on over a thousand wells. It has obviously becomes the method of choice for a few customers.

With propane gel we have all the effectiveness of hydro fracking along with some serious benefits.

1 We do not inject water into the formation at all. Since plenty of rock will react to the water and change in unwelcome ways and water is not soluble in oil, it is inevitable that the introduced water will affect the oil flow in the reservoir in negative ways as well as positive ways. Water is not really your natural first choice except that we know so much about it and have ample experience.

2 The propane escapes back up the well and in the process discards treatment chemicals that need to stay down hole anyway. Thus the fracking media is fully recovered and potentially recycled if desirable.

3 The other big plus that is subtle is that the propane will initially dissolve directly into the oil itself lowering its viscosity and even providing somewhat of a gas drive to move the oil. Thus it is reasonable that we see superior production throughput. And as noted here, that is exactly the operator experience.

With the massive anti fracking publicity nipping at the heels of the industry, I suspect that this propane gel treatment will become the industry standard rather quickly and everyone will be a lot happier. The industry really does not need the expensive mess.

Following a stream of dire headlines about plummeting natural gas prices, explorers and producers are finally beginning to shift their attention to advancements on the production side – more specifically, to a new natural gas extraction method.

A planned shale gas drilling project in New York state has drawn global attention for its aim to make use of a waterless form of hydraulic fracking – a new technique designed to reduce the pollution associated with controversial natural gas drilling processes.

According to an industry report, the project is focused on using a technology that pumps a thick gel made from propane into the ground as opposed to using traditional methods of hydraulic fracking that make use of a mixture of water, sand, and chemicals to extract natural gas reserves from deep shale formations. Unlike traditional technologies, the gel from the new liquefied propane gas (LPG) fracking method reverts to vapor while still underground, and as a result returns to the surface in a recoverable form.

According to its developer, Calgary-based GASFRAC Energy Services (TSX:GFS), the gel also holds advantages over water-based methods in that it does not carry the chemicals used during the drilling process back to the surface.

This process is significant in that if proven effective, it could potentially allow for the extraction of shale gas and oil from 135,000 acres in Tioga County, New York, breaking through the state’s current hydraulic fracking moratorium. The moratorium was imposed in 2010 after environmentalists expressed concerns that the drilling process could pose a threat to regional water supplies.

GASFRAC first used the patented process in a commercial setting four years ago and has since fracked over 1,300 wells in Canada and the US. The method was originally designed to improve the performance of low-pressure wells and has impressed those within the environmental arena.

“That has been the real surprise for us, an extra advantage,” said Doug McMillan, Vice President of GASFRAC. “In areas of drought-stricken Texas, water is impounded and sold for traditional fracking,” he continued. “And in the eastern US, there are concerns about water disposal and population density, but we can work there and are even going to be in New York.”

According to a report by The Vancouver Sun, while GASFRAC charges a 50 percent premium in comparison to traditional fracking companies, there can be significant savings in water use, truck traffic, and easier site cleanups. Apart from logistical gains, the article also referred to the rise in well production as “spectacular.” Reports from the Cardium formation, which is west of Edmonton, displayed that LPG fracking results are “two to three times better” at increasing the flow of oil and gas in comparison to traditional methods.

This sentiment was echoed when San Antonio-based BlackBrush Oil & Gas announced a two-year contract with GASFRAC in the oil-rich Eagle Ford shale in Texas. BlackBrush’s co-CEO commented in a press release that using LPG brought “oil production at a sustainable rate weeks earlier than with the standard water frac and we are seeing huge savings on disposal of frac fluids.”

While the New York moratorium will not be lifted until a new Supplemental Generic Environmental Impact Statement is complete, the Tioga County Landowners Group has announced to lease 135,000 acres to eCORP International, with the LPG fracking process making up one of the deal’s stipulations.
“Game-changing technology”

“We believe this game-changing technology will be embraced by, not only regulators and the industry, but the general population as well,” eCORP CEO John Thrash said in a press release.

“We believe that propane/butane gel could very well become the shale ‘treatment of choice’ in all countries because of its many technical and environmental benefits relative to large volume ‘slick’ water fracking techniques,” Mark Stauss, a senior director at eCORP, told InsideClimate News.

It is not only junior companies that are making use of the new method. Last year, Chevron (NYSE:CVX) used LPG to frack several natural gas wells in the Piceance Basin in Northwestern Colorado. In its annual report it noted that the technology “significantly increases production while minimizing water usage.”

Despite the positive spin being thrust upon this new extraction method, there has been opposition from environmental organizations. Fifteen groups, including the Sierra Club and the Natural Resources Defense Council, sent a letter to the New York DEC in early April, urging the agency to perform an environmental impact statement prior to permitting LPG wells, and describing LPG as a technology with “alarming” known and unknown risks.

Deb Nardone, from the Sierra Club, said that given the risk of explosions, “it is clear that propane fracking just substitutes one set of problems for another set of even more dangerous problems.”

Despite requests for further analysis from groups such as these, it does seem that this technology could be a significant step forward for the gas exploration and production community in terms of trying to find cleaner methods of extraction.

http://resourceinvestingnews.com/36090-waterless-natural-gas-fracking-method-unveiled.html#ixzz22JbVVUN3
Posted by arclein at 12:00 AM