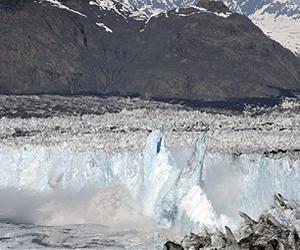 I suspect resolution is lousy and this work is still a long way from been helpful. However we do establish an epoch change around 900,000 years ago.

My interpretation of this epoch change is that is when the Panama isthmus arose and severed the Atlantic from the Pacific. This then led to a huge expansion of the northern Ice Sheet with a subsequent drop in sea lave hugely expanding the barrier itself. Geological data is already supporting this time frame.

The next question is just how solid is the 100,000 yr cycle and the 41,000 yr cycle? Orbital solutions do not work this way. Heat mass solution could possibly work this way. The fact that it changed at all throws the whole orbital theory into question even if folks have been relying on it for a few years.

I think we will have to wait for more data review.


1.5 million years of climate history revealed after scientists solve mystery of the deep

1.5 million years of climatehistory revealed after scientists solve mystery of the deep Study successfully reconstructed temperature from the deep sea to reveal how global ice volume has varied over the glacial-interglacial cycles of the past 1.5 million years

Tabular iceberg. The production of tabular icebergs is a major mechanism of mass loss from the Antarctic Ice Sheet. Icebergs are calved during both rapid ice-shelf collapse and as part of the normal transfer of mass through the ice sheet to the surrounding ocean.

Scientists have announced a major breakthrough in understanding the Earth's climate machine by reconstructing highly accurate records of changes in ice volume and deep-ocean temperatures over the last 1.5 million years.

The study, which is reported in the journal Science, offers new insights into a decades-long debate about how the shifts in the Earth's orbit relative to the sun have taken the Earth into and out of an ice-age climate.

Being able to reconstruct ancient climate change is a critical part of understanding why the climate behaves the way it does. It also helps us to predict how the planet might respond to man-made changes, such as the injection of large quantities of carbon dioxide into the atmosphere, in the future.

Unfortunately, scientists trying to construct an accurate picture of how such changes caused past climatic shifts have been thwarted by the fact that the most readily available marine geological record of ice-ages - changes in the ratio of oxygen isotopes (Oxygen 18 to Oxygen 16) preserved in tiny calcareous deep sea fossils called foraminifera - is compromised.

This is because the isotope record shows the combined effects of both deep sea temperature changes, and changes in the amount of ice volume. Separating these has in the past proven difficult or impossible, so researchers have been unable to tell whether changes in the Earth's orbit were affecting the temperature of the ocean more than the amount of ice at the Poles, or vice-versa.

The new study, which was carried out by researchers in the University of Cambridge Department of Earth Sciences, appears to have resolved this problem by introducing a new set of temperature-sensitive data. This allowed them to identify changes in ocean temperatures alone, subtract that from the original isotopic data set, and then build what they describe as an unprecedented picture of climatic change over the last 1.5 million years - a record of changes in both oceanic temperature and global ice volume.

Included in this is a much fuller representation of what happened during the "Mid-Pleistocene Transition" (MPT) - a major change in the Earth's climate system which took place sometime between 1.25 million and 600 thousand years ago. Before the MPT, the alternation between glacial periods of extreme cold, and warmer interglacials, happened at intervals of approximately 41,000 years. After the MPT, the major cycles became much longer, regularly taking 100,000 years. The second pattern of climate cycles is the one we are in now. Interestingly, this change occurred with little or no orbital forcing.

"Previously, we didn't really know what happened during this transition, or on either side of it," Professor Harry Elderfield, who led the research team, said. "Before you separate the ice volume and temperature signals, you don't know whether you're seeing a climate record in which ice volume changed dramatically, the oceans warmed or cooled substantially, or both."

"Now, for the first time, we have been able to separate these two components, which means that we stand a much better chance of understanding the mechanisms involved. One of the reasons why that is important, is because we are making changes to the factors that influence the climate now. The only way we can work out what the likely effects of that will be in detail is by finding analogues in the geological past, but that depends on having an accurate picture of the past behaviour of the climate system."

Researchers have developed more than 30 different models for how these features of the climate might have changed in the past, in the course of a debate which has endured for more than 60 years since pioneering work by Nobel Laureate Harold Urey in 1946. The new study helps resolve these problems by introducing a new dataset to the picture - the ratio of magnesium (Mg) to calcium (Ca) in foraminifera. Because it is easier for magnesium to be incorporated at higher temperatures, larger quantities of magnesium in the tiny marine fossils imply that the deep sea temperature was higher at that point in geological time.

The Mg/Ca dataset was taken from the fossil record contained in cores drilled on the Chatham Rise, an area of ocean east of New Zealand. It allowed the Cambridge team to map ocean temperature change over time. Once this had been done, they were able to subtract that information from the oxygen isotopic record. "The calculation tells us the difference between what water temperature was doing and what the ice sheets were doing across a 1.5 million year period," Professor Elderfield explained.

The resulting picture shows that ice volume has changed much more dramatically than ocean temperatures in response to changes in orbital geometry. Glacial periods during the 100,000-year cycles have been characterised by a very slow build-up of ice which took thousands of years, the result of ice volume responding to orbital change far more slowly than the ocean temperatures reacted. Ocean temperature change, however, reached a lower limit, probably because the freezing point of sea water put a restriction on how cold the deep ocean could get.

In addition, the record shows that the transition from 41,000-year cycles to 100,000-year cycles, the characteristic changeover of the MPT, was not as gradual as previously thought. In fact, the build-up of larger ice sheets, associated with longer glacials, appears to have begun quite suddenly, around 900,000 years ago. The pattern of the Earth's response to orbital forcing changed dramatically during this "900,000 year event", as the paper puts it.

The research team now plan to apply their method to the study of deep-sea temperatures elsewhere to investigate how orbital changes affected the climate in different parts of the world.

"Any uncertainty about the Earth's climate system fuels the sense that we don't really know how the climate is behaving, either in response to natural effects or those which are man-made," Professor Elderfield added. "If we can understand how earlier changes were initiated and what the impacts were, we stand a much better chance of being able to predict and prepare for changes in the future."