Does Sasquatch (Yes, Bigfoot) Roam the Forests of New England? 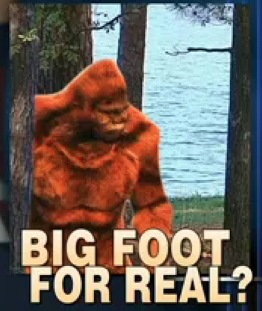 Sightings in New England is not news but the scale of community response is news. This has always been about winning the PR battle to ultimately trigger expensive expeditions able to successfully photograph this creature and possibly begin a food exchange with them that brings them into close contact. It is possible with most intelligent wild animals however dangerous.

Otherwise, this particular report is a actually quite odd. Assuming extensive damage includes tearing down trees, then this is quite unusual. In the meantime we do have an additional candidate in the form of the giant sloth in this part of the country that also has a putrid smell. Both are nocturnal, rely on the same niche and walk erect.

The images referred to are not yet part of the public record, so it is too soon to comment anyway.

Does Sasquatch (Yes, Bigfoot) Roam the Forests of New England?

Over the years, the majority of sightings of the elusive Sasquatch have been limited to the American northwest. In the last three decades, however, many more encounters have occurred in the northeastern sections of America, particularly upstate New York and New England.

Actually, these sightings are really not new to the area; they just haven’t received as much publicity as other occurrences in the Pacific Northwest. The Algonquin Indians for hundreds of years have reported creatures they named Stone Men and Giant Men. The descriptions rarely varied; about 7 feet tall with glowing red eyes, a putrid smell and sounds that resemble a pig squealing.

Author Paul Bartholomew and his brother have researched the Bigfoot question meticulously for decades and have published their findings in a book released earlier this year entitled: Bigfoot Encounters in New York and New England.

In his own words: “It’s a global phenomena and it’s here in our own backyards…This whole area (Whitehall, NY) is rich in traditional reports of this creature…”

A Vermont news station (WCAX.com) recently ran a story involving both Bartholomew and a witness to a Bigfoot sighting named Frank Siecienski, whose apple orchard had been ravaged by some unknown creature. Positive no deer could have wrought such destruction, he set up a trail-cam and the results were alarming to say the least as indicated below. The camera caught what is believed to be a female Sasquatch carrying her young.

Tom Donahue of Rutland Region Chamber of Commerce said: “Not only is it a fun, upbeat, interesting, different story that is being filmed here, the local community is getting very excited about it.”

Author Bartholomew hopes the show will increase public credibility and bring Bigfoot out of the shadows of legend and folklore.

“Our major goal is to bring this out of the tabloid mentality and bring it into science. The DNA age. And I think that’s right where we’re heading.”

For the human race, new species of animals that challenge the spirit of discovery and wonder are discovered often. Ultimately, all this publicity must be much more terrifying for an elusive creature fearing exposure to a world that may never understand or accept his existence.