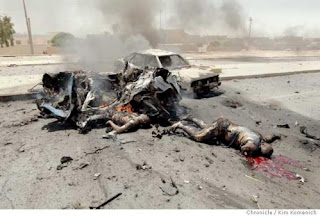 Civilization has learned to adjust to the risk of suicide bombers. Worse, their deaths have become meaningless because civilization has learned that a small loss here and there can be absorbed. In fact there is much to be said for setting aside the whole Homeland Security apparatus and simply accept losses while applying simple intelligence and watch methods as Canada does. Sealing off the cockpit works also.

At worse, they inflict death to innocents and then die. Mumbai is a great example of that.

Our difficulty has been that because the agency is human we hold the conceit that we can manage it perfectly. With a tornado, we know better.

This reality is also sinking into the mass consciousness. Hundreds have died and no one outside immediate families cares at all. Thus recruits are not coming forward as much as in the past. Not surprisingly, we earn that they are now running ads which is cheeky at least.

Apparently low on bombers, al-Qaeda is running a (short-term)employment advertisement on its Shumukh al-Islam Internet forum. Under the heading “Area of activity: The planet Earth,” the ad seeks jihadists to carry out suicide attacks.


Applicants must be Muslim, mentally mature, dedicated, able to listen, and utterly committed to completing their mission, the Hebrew daily Yedioth Ahronoth reported on Tuesday.


Several email addresses are provided for applicants. While their real names are not required, candidates are asked to send details of their nickname or handle, their age, marital status, languages spoken and a list of passports in their possession.


The ad on the forum, which is accessible only to al-Qaeda members, specifies the targets of the terror attacks that applicants will be expected to carry out, including “People who fight Islam and Muslims” and enemy “financial, military and media targets.”


The ad indicates that the anticipated attacks will be solo operations: “Only one person will be in charge. He will gather all of the intelligence, he will prepare the operation — and he will complete the attack.” However, it continues, “a military panel” will oversee the bomber’s training and select the target.

The job description promises only a “very slight chance of being caught.”


The ad has elicited several positive responses, the Yedioth article claimed. One forum participant requested that Germany, Denmark and Sweden be specified as potential targets. The same participant warned the forum to be very careful about what it publishes, for fear that the enemy may see what the group is planning. - timesofisrael