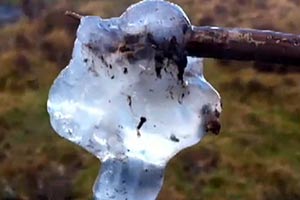 In earlier postings I made the conjecture that slime molds may take to the air by filling a small sac with methane. Been slime molds they could also gather in large groups and then if conditions were right they would rise up in the atmosphere. We do see scum on methane rich waters. A cool humid night just might do it.

Collapsing they would then produce a gel that would fall to the ground and soon dissipate.

The more interesting question was whether such an assemblage could also get into the Stratosphere, or even survive there. It is certainly hard to see how they might survive direct sunlight in the first instance.

Regardless we have a research problem. Simulate methane producing scum and the proper environmental conditions and discover if we get airborne slime molds. This is something that can be done as a school project even in an aquarium with a lid.

They have discovered a strange jelly... and some experts believe it’s landed from space.

The first report of an unidentified fluid object was in the Pentland Hills near Edinburgh, triggering a flood of similar sightings.

Now National Geographic Channel documentary Wild X Files attempts to solve the mystery after they had the weird samples analysed by scientists.

Paranormal investigator Steve Mera is convinced he was dealing with aliens after a sample he collected DISAPPEARED.

He said: “I was dumbfounded. I had no idea what it was.

“I thought ‘let’s get some samples.’ The next morning, I saw the sample jar and I did a double take as there was nothing in it. It was there the night before, now it was empty.” Steve was sure he was dealing with star jelly left over from a meteor shower. He said: “It comes from space.”

Euan McIlwraith, presenter of BBC show Out Of Doors, added: “A call came into the studio from somebody who had been hillwalking and found this substance. We knew we were on to something strange.
“There are lot of people out there who believe it comes from the stars.”

Deer hunter Andy Malcolm thought the goo was stag sperm — but this was ruled out when perplexed fungal ecologist Dr Andy Turner found the samples contained NO animal DNA.

He said: “We could see almost no cellular structure within it so it was difficult to determine what it was.”

Algal researcher Dr Hans Sluiman found it “unlikely” that it was from a plant while Prof Malcolm Kennedy, from Glasgow University, believes the jelly is from frogs used for spawn.

He explained: “When it’s made it has DNA excluded from it. When frogs come under attack, fear causes them to expel the jelly normally used to protect eggs.”

The National Geographic Channel has declared the case closed but Euan said: “There’s still that bit at the back of my head that isn’t exactly convinced.”