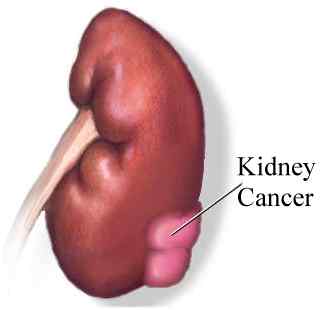 Doing something to support the immune system response has always been indicated in cancer research, while mastering the art, quite another story. This appears to be promising although the first clear goal is simply life extension which seems plausible. The real problem appears to be the lack of an actual curative pathway here.

Of course chemo suffers from much the same fault in that it is a crap shoot to actually be cured when the body's defenses are badly beaten down.

This at least appears to be reinvigorating the immune system as part of the attack. This should produce superior results.

Researchers at the University of Tübingen and immatics biotechnologies GmbH – a start-up by Tübingen scientists – have published the results of two clinical studies using the kidney-cancer vaccine IMA901 in the latest edition of Nature Medicine.

IMA901 is used to treat patients with cancer of the kidneys. It is composed of ten synthetic tumor-associated peptides (TUMAPs), which activate the body’s own killer T-cells against the tumor. Unlike chemotherapy, this process targets the body’s immune responses and mobilizes them to attack the cancer. The studies show that this active immunization against cancer can be successful and extend the life of a patient for longer than even the latest chemotherapy techniques – with far fewer side-effects.

Prof. Dr. Hans-Georg Rammensee, head of Immunology at the University of Tübingen and co-founder of immatics biotechnologies, says: “This work is a milestone in the development of cancer immune therapies. The principle applied here – of active immunization against cancer antigens previously identified in cancer cells – can be used against practically all types of cancer. University of Tübingen researchers have published similarly successful clinical studies in the case of bowel cancer, also in collaboration with immatics, and prostate cancer. Immatics is currently carrying out studies on treatments for glioblastoma [a common and malignant brain tumor] and further studies for treating liver cancer and ovarian carcinoma are in the pipeline.”

Prof. Dr. Arnulf Stenzl, head of Urology at the University Hospitals, who supervised the clinical studies, explains: “All of the medications previously used have brought about a clear improvement in reducing tumor growth in cancer of the kidneys, but they did not lead to the desired extension of the patient’s life and certainly did not cure the patient. So from the clinical point of view, the further development by immatics of active immunization in combination with a low dose of one-off chemotherapy is a significant step in the treatment of kidney cell carcinoma – and possibly other malignant tumors as well.”

One particular aspect of this kidney cancer study is its uniquely exhaustive analysis of the immune response against the cancer antigens – done with the help of biomarkers. In particular, the characteristics of the white blood cells involved were precisely detailed during the course of the immunization. Complex logistics were required to get these cells frozen and transported to Tübingen from study centers all over Europe, while ensuring they were in a fit state to be analyzed.

The study shows that in kidney-cancer patients with documented T-cell reactions against two or more tumor-associated peptides, the immune reaction and clinical progress were clearly linked. That confirms the hypothesis that cancer treatments can be further developed by broadly activating the immune system against various target structures on the surface of the tumor.

The article also describes the researchers’ aims of identifying biomarkers which could help give a more accurate prediction of how long certain groups of patients may live after being treated with IMA901. An analysis of more than 300 potential biomarkers turned up a number of them which are currently being tested in a new phase-3 study by immatics for their ability to show an immune response and the extension of patient life after treatment with IMA901.