I stated loudly back in 2007 before that years ice loss shaped up into a record, that ice losses would allow clear sailing by 2012. This was not wishful thinking on my part but understanding and extrapolating the already well defined decline. My news release sparked a quiet news release out of NASA saying much the same. Obviously they had held back until they were forced by my news release.

The sea ice itself has today reached what may well be described as its terminal phase. There is a minimum of multiyear ice and it is all well broken up. The area covered although highly variable on a year by year basis has now contracted so much that both passages are wide open this year. This can still be expected to vary greatly depending on winds, but I now think that the North West passage is clear four years out of five and the North East passage will be clear half the time. The areal extent has contracted so well as to make blockage difficult.

This is all great news for shipping and cruise tourism.

I do not expect the sea ice ever to reach zero for the summer low, but think that the injection of warm surface water that is causing all this will work to keep the summer sea ice well contained. 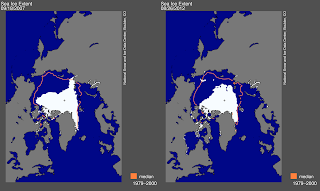 Arctic sea ice appears to have broken the 2007 record daily extent and is now the lowest in the satellite era. With two to three more weeks left in the melt season, sea ice continues to track below 2007 daily extents.

Please note that this is not an announcement of the sea ice minimum extent for 2012. NSIDC will release numbers for the 2012 daily minimum extent when it occurs. A full analysis of the melt season will be published in early October, once monthly data are available for September.

Including this year, the six lowest ice extents in the satellite record have occurred in the last six years (2007 to 2012).

After tracking near 2007 levels through July, the extent declined rapidly in early August. Since then, the loss rate has slowed some, averaging about 75,000 square kilometers (29,000 square miles) per day—equivalent to the size of the state of South Carolina. However, this is still much faster than the normal rate at this time of year of about 40,000 square kilometers per day (15,000 square miles).
Note that the date and extent of the 2007 minimum have changed since we originally posted in 2007; see our Frequently Asked Questions for more information.