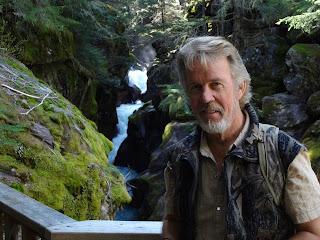 This is a good report and investigation of the chatter collected from a troop of Bigfoot in the Sierra Nevada. Clearly the creatures felt no threat and were also curious. Importantly they were also away from human occupation and were in their own range and not just passing through.

Apparently the same conditions also apply in Banff National Park were several such troops have been identified as per post last year.

Another report also informed us that an individual was approached and had a discussion with an older Bigfoot who he had assisted almost unknowingly. That individual had clearly made an effort to overhear our chatter and had come to understand it enough to attempt communication. However it was a clear outlier.

This piece provides outright confirmation that language is been utilized and also that in the right conditions, these primates will make an effort to communicate. Again they need to haul in lots of apples for them as gifts. I would even plant some apple trees atv the meeting place and be seen tending them.

We’ve discussed a wide variety of strange phenomena on Extraordinary Intelligence over the years.  Very few things rattle me anymore, but when I heard Ron Morehead’s story on L.A. Marzulli’s Acceleration Radio, the hair on the back of my neck stood up.

Starting in 1971, Mr. Morehead had a series of extraordinary encounters.  In a remote wilderness camp, he and his party were witnesses to some of the strangest sounds and interactions between man and beast (?) that I’ve ever heard.  Returning to the camp many times, Ron and those who traveled with him captured audio evidence of these encounters that may send chills down your spine.  His audios have been examined by experts and cannot be debunked.  In fact, crypto-linguists claim to have actually discovered a complex language within the recordings!

Ron Morehead is the author of Voices in the Wilderness, and is the producer of the Bigfoot Recordings Vol. 1 & 2.  He has had much field experience with the Bigfoot phenomenon, and focuses on interacting with these giants and understanding them better.  I am so thrilled that he agreed to share his story with Extraordinary Intelligence.

A note from Ron: My answers are based mostly on my experiences with this particular family of creatures. I believe there could be different types of these giants roaming the forests.

1.  Thanks Mr. Morehead, for agreeing to share your compelling story with Extraordinary Intelligence. Before we discuss the evidence you’ve collected, let’s set the scene. Tell us a bit about your background and what led you to the first encounter with an unknown creature in the woods.

At the time these encounters began my profession was in the hospitality industry. I was also the administrator of a large church in Merced, CA. One of the other board members was a hunter and socially our families blended well. At that time I did not hunt. However, in 1971, after the hunting group that my friend was involved with was a couple days late, his wife told me of an encounter the men had with an unknown ‘something’ that made horrific, intimidating sounds and left huge five-toed prints around their camp. All the wives were worried. After one night of experiencing these sounds, one of the hunters fled the camp. He knew the way back in but wanted someone trustworthy to accompany him. This was the beginning of my trekking into this remote wilderness area of the Sierra Nevada Mountains.

2. Prior to your encounter with what you believe to be Bigfoot, were you a believer in/did you know much about these beings?

Actually, I had no thoughts about bigfoot, one way or the other. I believed then, as I believe now, that we humans don’t know all there is to know. I was very curious.

3. At what point did you decide to begin recording the sounds you were hearing?

The sounds were being heard almost every time the camp was visited during 1971 and 1972. We all began to pack cassette recorders to record them.

Ron was kind enough to send me a few of the sounds that he’s captured.   Listen below:

1. Disagreement:
2. Fast Talk:
3. Vocal Exchange (This one is particularly interesting because it features human interaction with the creatures in the woods):

4. Were you or was anyone in your party ever able to get a visual on the creatures? Further, was there any other strange phenomena seen in the area of these sightings/encounters?

Yes. Although these creatures were/are extremely stealthy, brief glimpses were occasionally caught. However, we were never able to capture a picture. All our camera traps failed. Different type of sounds heard are unexplained by classical science. Small orbs were reportedly following three of the hunters around the camp. I noted a large controlled ball of light once. During the day, we’ve all heard what sounded like a large tuning fork. Other unusual events are mentioned in my book.

5. With regard to the sounds that you captured, what makes them stand out as unique to other woodland animal sounds?

Their rapid chatter and amplitude is completely different than anything else that might be heard in the forest.

6. Has there been any type of research or review of the tapes? What were the findings?

Yes. In 1978, Dr. R. Lynn Kirlin, Professor of Electrical Engineering at the University of Wyoming, conducted a year-long study of the sounds and established that the tapes had not been altered, i.e., slowed down, speeded up, pre-recorded or re-recorded. His semi-quantitative study also established the vocal track length to be much larger than that of humans. More recently, in 2008, a highly trained Crypto-Linguist, R. Scott Nelson, established that the sounds are ‘language’.

The interaction exchange was recorded in 1974 when I tried to mimic their sounds. According to the Crypto-Linguist, this was an effort on their part to slow down their rapid chatter and communicate.

7. Do you continue to visit the area where you first encountered bigfoot?

8. What is your advice to an amateur researcher who may encounter creatures such as the ones you’ve had experience with?

There are several things I suggest, which can be reviewed on my web site www.bigfootsounds.com.
However, the main suggestion is to realize that they are sentient beings, able to reason using cognizant thought process like we do. Don’t underestimate them.

9. Do you have theories as to the origins of Bigfoot? What are they? Where do they come from? Are they strictly physical beings or do you think there’s a supernatural component to their existence?

Theories can change as one’s knowledge expands. However, after over 40 years of delving into this enigma, my theory at this time is that they are a remnant of a demigod – celestial intervention; perhaps part great ape (orangutan?). The sentiency comes from the celestial intervention. They are definitely ‘physical’ but may also have an attribute that we don’t fully understand –nor is it answerable by classical science. Perhaps we also have this attribute, but were disconnected from it at one time, i.e., ‘Garden of Eden’.

10. Thank you so much for taking the time to discuss your fascinating research with us! For our final question, do you have any upcoming projects/appearances that you’d like the readers to be aware of? Also, where can we acquire your published materials and please share the links to your website.

At my presentations I give a PowerPoint program and play some of the sounds. These events are mentioned on my Facebook page. My book, ‘Voices in the Wilderness’ and two different CDs with the story and the sounds are available at www.bigfootsounds.com

I appreciate this opportunity.