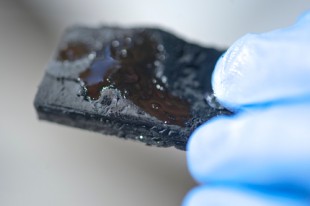 This is obviously a wonderful material.  Now we have to figure out how to produce it continuously in a sheet to the desired thickness.  Since it can be produced, it should be possible to generate it in a continuous manufacturing process.  Incremental improvement will then bring costs down and volumes up.

It certainly can become the perfect sponge running through a continuous loop through rollers and on out into the sea that can swiftly collect floating oil.  That should be the least of the available applications though.

Way more important is that this provides us with a serious fabric that is cross linked and is surely equally strong in all directions.  It can not tear on a weakness and likely will never fail in any manner.  It will be key to making space suits.

It is also ideal for making complex composite shells for aircraft and importantly for space craft.  There is no reason to think that a form made from this fabric cannot be made to wick up molten metal to provide a very strong structure.  How about titanium?  This would allow a very thin shelled armor plate.

Another wild idea is to create a wide enough matrix and then form a shell that can be absorbed into the bone of one's skull.  Even ordinary bones could be protected in this manner.  The result would be bones impervious to breakage but not bruising and the effects of trauma.

My point is that this material should be more or less biologically neutral allowing all sorts of innovations. 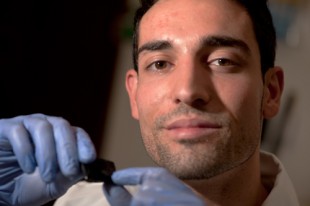 Researchers at Rice University and Penn State University have discovered that adding a dash of boron to carbon while creating nanotubes turns them into solid, spongy, reusable blocks that have an astounding ability to absorb oil spilled in water.

That’s one of a range of potential innovations for the material created in a single step. The team found for the first time that boron puts kinks and elbows into the nanotubes as they grow and promotes the formation of covalent bonds, which give the sponges their robust qualities.

The researchers, who collaborated with peers in labs around the nation and in Spain, Belgium and Japan, revealed their discovery in Nature’s online open-access journal Scientific Reports.

Lead author Daniel Hashim, a graduate student in the Rice lab of materials scientist Pulickel Ajayan, said the blocks are both superhydrophobic (they hate water, so they float really well) and oleophilic (they love oil). The nanosponges, which are more than 99 percent air, also conduct electricity and can easily be manipulated with magnets.

To demonstrate, Hashim dropped the sponge into a dish of water with used motor oil floating on top. The sponge soaked it up. He then put a match to the material, burned off the oil and returned the sponge to the water to absorb more. The robust sponge can be used repeatedly and stands up to abuse; he said a sample remained elastic after about 10,000 compressions in the lab. The sponge can also store the oil for later retrieval, he said.

“These samples can be made pretty large and can be easily scaled up,” said Hashim, holding a half-inch square block of billions of nanotubes. “They’re super-low density, so the available volume is large. That’s why the uptake of oil can be so high.” He said the sponges described in the paper can absorb more than a hundred times their weight in oil.
Ajayan, Rice’s Benjamin M. and Mary Greenwood Anderson Professor in Mechanical Engineering and Materials Science and of chemistry, said multiwalled carbon nanotubes grown on a substrate via chemical vapor deposition usually stand up straight without any real connections to their neighbors. But the boron-introduced defects induced the nanotubes to bond at the atomic level, which tangled them into a complex network. Nanotube sponges with oil-absorbing potential have been made before,  but this is the first time the covalent junctions between nanotubes in such solids have been convincingly demonstrated, he said.

“The interactions happen as they grow, and the material comes out of the furnace as a solid,” Ajayan said. “People have made nanotube solids via post-growth processing but without proper covalent connections. The advantage here is that the material is directly created during growth and comes out as a cross-linked porous network.

“It’s easy for us to make nano building blocks, but getting to the macroscale has been tough,” he said. “The nanotubes have to connect either through some clever way of creating topological defects, or they have to be welded together.”

This carbon nanotube sponge created at Rice University can hold more than 100 times its weight in oil. Oil can be squeezed out or burned off, and the sponge reused. Photo by Jeff Fitlow

When he was an undergraduate student of Ajayan’s at Rensselaer Polytechnic Institute, Hashim and his classmates discovered hints of a topological solution to the problem while participating in a National Science Foundation exchange program at the Institute of Scientific Research and Technology (IPICYT) in San Luis Potosí, Mexico. The paper’s co-author, Mauricio Terrones, a professor of physics, materials science and engineering at Penn State University with an appointment at Shinshu University, Japan, led a nanotechnology lab there.

“Our goal was to find a way to make three-dimensional networks of these carbon nanotubes that would form a macroscale fabric — a spongy block of nanotubes that would be big and thick enough to be used to clean up oil spills and to perform other tasks,” Terrones said. “We realized that the trick was adding boron — a chemical element next to carbon on the periodic table — because boron helps to trigger the interconnections of the material. To add the boron, we used very high temperatures and we then ‘knitted’ the substance into the nanotube fabric.”

The researchers have high hopes for the material’s environmental applications. “For oil spills, you would have to make large sheets of these or find a way to weld sheets together (a process Hashim continues to work on),” Ajayan said.

“Oil-spill remediation and environmental cleanup are just the beginning of how useful these new nanotube materials could be,” Terrones added. “For example, we could use these materials to make more efficient and lighter batteries. We could use them as scaffolds for bone-tissue regeneration. We even could impregnate the nanotube sponge with polymers to fabricate robust and light composites for the automobile and plane industries.”

Hashim suggested his nanosponges may also work as membranes for filtration.

“I don’t think anybody has created anything like this before,” Ajayan said. “It’s a spectacular nanostructured sponge.”

The National Science Foundation and the Air Force Office of Scientific Research Project MURI program for the synthesis and characterization of 3-D carbon nanotube solid networks supported the research.
Posted by arclein at 12:01 AM

I am sick and tired of these so called scientist or researchers experimenting with humans, animals, sky and our earth. They have no idea what will happen in the long run and it could be devastating. Enough with the altering of nature!!!!!

I am sick and tired of these so called scientist or researchers experimenting with humans, animals, sky and our earth. They have no idea what will happen in the long run and it could be devastating. Enough with the altering of nature!!!!!