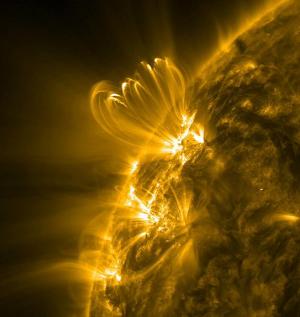 The half life for Sm – 146 has been cut from 103 my down to 68 my.  That is pretty significant  and the immediate impact has been to clean up some vexing discrepancies out there.

The underlying assumption continues to be that the half life is invariant.  It may be, but it is the first thing that I would expect to see altered if we passed through a zone of ‘dark matter’.  Such a zone would surely increase the rate of nuclear decay as some of the dark matter is absorbed into the atoms.  (I will not explain this at the moment)  I suspect that our exposure to dark matter varies greatly as we travel around the Galaxy and radiactive decay rates vary accordingly.

ScienceDaily (Apr. 3, 2012) — The early days of our solar system might look quite different than previously thought, according to research at the U.S. Department of Energy's (DOE) Argonne National Laboratory published in Science. The study used more sensitive instruments to find a different half-life for samarium, one of the isotopes used to chart the evolution of the solar system.

"It shrinks the chronology of early events in the solar system, like the formation of planets, into a shorter time span," said physicist Michael Paul. "It also means some of the oldest rocks on Earth would have formed even earlier -- as early as 120 million years after the solar system formed, in one case of rocks."

According to current theory, everything in our solar system formed from star dust several billion years ago. Some of this dust was formed in giant supernovae explosions which supplied most of our heavy elements. One of these is the isotope samarium-146.

Samarium-146, or Sm-146, is unstable and occasionally emits a particle, which changes the atom into a different element. Using the same technique as radiocarbon dating, scientists can calculate how long it's been since the Sm-146 was created. Because Sm-146 decays extremely slowly -- on the order of millions of years -- many models use it to help determine the age of the solar system.

The number of years it takes for an isotope to decrease by half is called its half-life. Since Sm-146 emits particles so rarely, it takes a sophisticated instrument to measure this half-life.

The Tandem Linac Accelerator System, or ATLAS, is a DOE national user facility for the study of nuclear structure and astrophysics, and is just such an instrument. "It's easy for the ATLAS, used as a mass spectrometer, to pick out one Sm-146 atom in tens of billions of atoms," said physicist Richard Pardo, who manages the facility and participated in the study.

By counting Sm-146 atoms with ATLAS and tracking the particles that the sample emits, the team came up with a new calculation for its half-life: just 68 million years.

This is significantly shorter than the previously used value of 103 million years.

The new value patches some holes in current understanding, according to Paul. "The new time scale now matches up with a recent, precise dating taken from a lunar rock, and is in better agreement with dates obtained with other chronometers," Paul said.

The work was supported by the DOE Office of Science and the Society for the Promotion of Science.