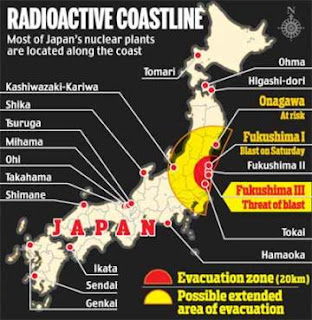 I suspect that the collective Japanese Will has already decided to end 's love affair with nuclear power.  Some reactors will come back up to meet necessary demand, but this past year they have stress tested what can be accomplished without the power.  The fact that it is possible to operate with all reactors shut down will not be lost on anyone.

proved that obvious engineering issues will be ignored by real world decision makers again and again.  The tsunami risk was there in the geological record and regardless a completely predictable risk.  Engineering design to permit plant systems survival was easy and generally cheap if not integral anyway.

The real world risk of a reactor failure is no longer theoretical. And the price is paid in terms of hundreds of square miles of condemned land and assets.   It is foolish to operate a protocol capable of destroying even in perpetuity, ten times its own worth.

To exaggerate a little bit, imagine destroying in the seventeenth century and then be continuously liable for real world taxes to this day.  My point however is that that is the problem facing nuclear power.  The long term obligation is not extinguishable.

None of 's 54 nuclear reactors will be in operation as of May 6, as the country's last reactor operating is to go offline for maintenance, Japanese Trade Minister Yukio Edano said.

The bulk of 's reactors -- excluding the No. 3 Tomari reactor in scheduled to be shut down May 5 for maintenance -- were taken offline for scheduled checkups but have stayed offline due to safety concerns sparked by the nuclear power plant disaster following the March 11, 2011, earthquake and tsunami.

Although the May 5 Tomari shutdown means that nuclear power in Japan "will be zero from May 6 momentarily," Edano said in a speech Sunday in Tokushima that Japan will eventually reduce its reliance on nuclear power "to zero permanently," Kyodo news reports.

The Tomari shutdown will mark the first time that would be without nuclear power production since 1966, when the country's first reactor began operation.

Prior to the crisis, nuclear power provided 30 percent of 's electricity.

While Edano on Sunday called for support for the reactivation of the Oi reactors to avoid power shortages in the near future, he maintained, "We will realistically and steadily reduce the number of nuclear reactors through a process that would not cause concerns or confusion in society while thoroughly examining their safety."

At a parliamentary committee meeting Friday, Edano said that even if the two Kansai reactors are restarted, the utility's service territory, including , could face electricity shortages during summer heat waves, particularly with increased air conditioner use.

"I have to say we are facing the risk of a very severe electricity shortage," Edano told reporters.

But the momentum to restart 's reactors is losing ground as time passes, particularly if and its economy emerge relatively unscathed from a nuclear power-free summer.

As for the decision to restart other nuclear reactors, the government plans to make those on a case-by-case basis.

"Each time, we will make a decision based on safety and necessity," Edano said at a news conference Friday, noting that restarting the Oi reactors would not automatically open the door for reactors at other plants to be restarted.

Platts news service cited industry sources as saying that Japan could see restarts of several of the country's nuclear reactors this year, yet they say most of the total nuclear capacity of 48.96 gigawatts is expected to remain shut because of safety concerns.
Posted by arclein at 12:01 AM