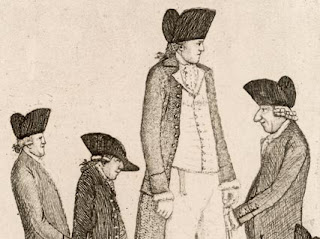 This helps us put this all together.  We have a source population in of red haired giants that plausibly became common and even became part of a tribal group possibly sought after for military prowess.  This population is indicated in Scandinavia and also.  Most important they were certainly present and extant adjacent to the Irish Sea which was part of the return route for the annual Minoan/Atlantean Copper fleet that passed every year from 2400 BC through 1159BC.

It is also plausible that independent Irish expeditions sailed to take advantage of the - to the Copper fields.  We have extensive Bronze Age evidence along the environs of this route including the report today on red haired giants located near .  Slowly but surely the evidence has been adding up since the early 1980’s when Berry Fell drew attention to it and was roundly ignored.

The giants though are very important simply because they are absolutely alien to including confirmation that the DNA is effectively British.  Now deniers must get past the existence of hard evidence that includes extraordinary bones and DNA.  They simply cannot have it both ways.

For the record, there are several reports and apparent sources of hard evidence to police up for a complete study once the archeologists decide to accept the plausibility of the Bronze Age Minoan – Atlantean global trade culture.

It is a really good bet that these giants were prized by the Minoans to have along to impress opposing forces.  The tale of Goliath is the tale of only one man with the Philistine army which was a Minoan colony at least.  Yet that was enough to dishearten the Israelites.

Bronze Age European presence in is shaping up to be persuasive.  Most likely it led the mound building culture in its entirety.  After all, the commonality for this 1300 year presence world wide appears to be the building of some form of pyramid.  This was mostly done initially at least with individual sacks of soil and rock.  In the , the use of earth and gravels may well have been the only option.

This includes the Nile Delta, then Minoan in culture in all likelihood as well as locales wherever they established a sizable presence.

Legends of Irish Giants Are More Than Tall Tales

Ariel Marshall sent me the link to this article and we both feel it is sure to have a bearing on the matter of the Giant Early Americans....

LEGENDS OF IRISH GIANTS ARE MORE THAN TALL TALES

Although the Irish legend of leprechauns [Cobbling shoes forever] is probably just a load of blarney, there's scientific evidence suggesting that the fabled stories of giants living on the Emerald Isle aren't just tall tales.

According to a study in The New England Journal of Medicine, it seems that is a hot spot for people with pituitary adenomas -- tumors that can cause the pituitary gland to pump out 50 times more growth hormones than normal, often leading to enormous growth spurts.

Familiar with Ireland's folkloric history as a home to giants, researcher Dr. Marta Korbonits, a professor of endocrinology and metabolism at Barts and the London School of Medicine, looked to the past and found a genetic link connecting four modern-day Northern Ireland families with one of the nation's most famous titans.

Korbonits and crew used DNA extracted from the teeth of Charles Byrne, a 7-foot-7 giant who made a big impression in during the 18th century, to discover a genetic mutation for the pituitary problem.

In addition, they were able to connect that mutation with four modern-day Northern Ireland families, including Brendan Holland, a 6-foot-9 giant who, according to the "Today" show, would have grown to 8 feet had his tumor not been treated with radiation at the age of 19.

and Byrne's inherited gene mutation for gigantism has even deeper roots: a common ancestor who lived an estimated 1,425-1,650 years earlier -- or 57-66 generations ago.

But the findings have more interested in the future than the past.

"I know that my children or my grandchildren could be screened for this rogue gene and if they are sufferers (of familial isolated pituitary adenoma), they can be given early treatment," he told MSNBC.

Charles Byrne (1761-1783), known as the Irish Giant, is depicted with various notables.

Korbonits hopes this new evidence can lead to a better understanding of pituitary adenomas.

"These people are not weirdos or freaks, but just ordinary ill people, as anybody else who inherits an increased chance to get a disease from their parents, as many of us do with other diseases, such as heart disease or diabetes," she said.


Meanwhile, the news that gigantism is genetic and, if discovered in time, can be minimized is big news to the folks at Ripley's Believe It Or Not -- a company famous for celebrating and promoting various anomalies of nature, including giants.


"I wonder if the NBA could be in trouble," said Ripley's spokesman Tim O'Brien. "Still, gigantism is not something we wish upon anyone. Robert Ripley himself was very attuned to freaks of nature -- as are we -- and medical science has taken care of many problems, such as if a person has an extra leg or excessive obesity, so if this discovery can relieve people of suffering, that's a good thing."


Families that run to gigantism are independantly known from Scotland and Scandinavia, so this very likely could be a valuable clue to follow up on--Best Wishes, Dale