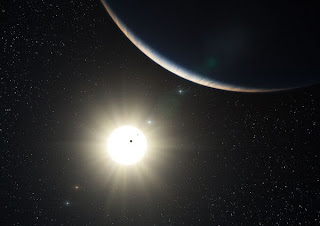 The hunt for planets is in the early days and my sense is that we are getting glimpses of the true complexity.  I suspect every solar system may prove to have the equivalent of Jupiter.  Yet these are far out and likely too difficult to detect.  Or even more likely the presence of a Jupiter is the organizing force and those without are radically different.

What is no longer in doubt is that suns have planets and ample debris just like we do.  This means that every nearby star can be safely approached with the idea to establish a presence of some sort even with zero expectation of livability.

The real trick will be to send a robotic craft on its way at sufficient speed to get there in anyone’s life.  Again one G continous thrust will do it.

An artist's conception of the planetary system around HD 10180.

A star about 127 light-years from Earth may have even more planets than the sun, which would make the planetary system the most populated yet found.

According to a new study, HD 10180—a sunlike star in the southern constellation Hydrus—may have as many as nine orbiting planets, besting the eight official planets in our solar system.

The star first made headlines in 2010 with the announcement of five confirmed planets and two more planetary candidates.

Now, reanalysis of nearly a decade's worth of data has not only confirmed the existence of the two possible planets but also uncovered the telltale signals of two additional planets possibly circling the star, bringing the total to nine.

"There certainly is, according to my results, strong evidence that this is the most populous planetary system detected—possibly even richer than the solar system," said study leader Mikko Tuomi, an astronomer at the of in the

"But the two new planetary signals I report exceed the detection threshold only just."

Early indications are that both newly detected worlds are super-Earths—planets slightly larger than Earth with rocky surfaces—but more measurements will be needed to confirm their existance.

The planetary system around HD 10180 is too far from Earth for us to see directly. (Related: "First Pictures of Alien Planet System Revealed.")

Instead, astronomers detected the planets by measuring their gravitational tugs on the host star using the High Accuracy Planet Searcher (HARPS) instrument on the European Southern Observatory's 3.6-meter telescope at La .

The five established planets are between 12 and 25 times the mass of Earth and are all around the sizes of Uranus or Neptune, meaning the worlds are most likely icy gas giants.

Of the two newly confirmed planets, one is about 65 times the mass of Earth, and it orbits farther beyond the main group. The other planet is a super-Earth 1.3 times the mass of our home world that circles very close to the host star.

The two new, unconfirmed planets also have tight orbits: A planet thought to be 1.9 times the mass of Earth completes its orbit in 10 days, while the other world is likely 5.1 Earth masses with an orbit lasting 68 days.

That means, if the planets do exist, they'd be unlikely candidates to host life.

"They are likely hot planets without dense, gaseous atmospheres, because they are just so close to their star," Tuomi said.

The astronomer now hopes to take more measurements and verify the planets are really there.

"We have only just started to detect planets, and the known exoplanet systems are but a tip of the iceberg," he said.

"So [our] solar system is only one example among a spectrum of different planetary systems we will find in the near future and [is] definitely not unique.
Posted by arclein at 12:01 AM