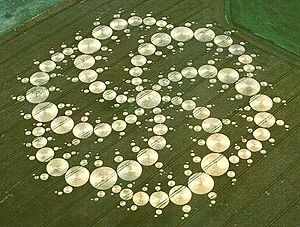 As I have posted before, genuine crop circles are formed out of six inch pixels formed by a microwave laser firing under a computerized aiming and firing system from a couple of miles above the fields.  The history of the circles or glyphs mirrors both the development of computer capacity and the evolution of microwave based laser systems by the defense industry.  Since it is a defense project, it has been shielded behind misinformation and denial and I am sure a late night visit to the farmers with a handful of cash and a fresh understanding of the secrets act.

Confirmation of this program emerged only recently with the demonstration of such a laser knocking out a missile for the first time from aboard ship.  The tool really does exist and the time lines pretty well assures us that I do not have to wave in alien jesters when  I have perfectly good human jesters working nearby.

In the meantime the press continues to buy the cover stories as do the folks chasing the glyphs.  The phrase, useful idiots comes to mind.  This item is a bit of a travel item telling you how to chase them. Perhaps this will become a tourist obsession worth maintaining.

The mystery of England's crop circles

Wiltshire, the home of mystical Stonehenge, is also awash in complex field formations that some say contain strange powers

The lingering midsummer twilight filtered through the window into the upstairs chamber of the farmhouse B&B as my sister and I settled into our twin beds. Before turning off the light she asked me, "What do you want for your birthday?" reminding me that tomorrow I would officially transition into the middle age of 40.

Pondering a moment, I jokingly replied, "How about a crop circle? That would be just fine," and after a long day we quickly drifted off to sleep.

At the crack of dawn I was shaken awake by my sister exclaiming, "Get up! Look out the window."

I sat up and there across the field on the lower slope of a hill, etched with one of Wiltshire's famed chalk White Horses, beckoned a pristine crop circle. We threw on our clothes, rushed out the door and beelined along the tractor line through the knee-high barley toward this exquisite mystery I sensed was meant just for me.

Fifteen years passed since my auspicious crop circle experience, and as my 56th birthday approached, I decided to fulfill my dream of spending the summer among these crop formations, along with the colourful cast of characters who chase them.

Though this phenomenon enjoyed its 15 minutes of fame in the 1990s, dozens of these often complex geometric patterns still appear every summer. Notorious pensioners Doug Bower and Dave Chorley have claimed credit for some pedestrian formations (Google them for details), but despite night watches by researchers and irate farmers who offered a bounty, circle makers are rarely, if ever, caught in the act and the mystery remains.

Crop circles - more accurately, agriglyphs or pictograms - were the reason I ventured into Wiltshire, and ground zero was the Silent Circle, a café and bookshop in Yatesbury, about 130 kilometres west of London, started by crop circle researcher Charles Mallett, who explained that sightings filter in from passing vehicles or pilots scouting the landscape. Like storm chasers, once an approximate location is established, a carload of "croppies" heads out to find it.

A new one had been discovered that day, so I drove to East Kennet and parked. The midsummer sun lingered along the horizon as I walked up the tractor line to the formation. While some sleuths experience swoops of energy inside circles, anything subtle I might have felt was overwhelmed by mere excitement.

Reverently walking the perimeter, I eventually discerned its arcing quadrennial form. Though I was initially disappointed by the seemingly uneven lay of the crop, later aerial photos revealed a lovely Celtic Cross, the interplay of light in the feathered lay creating a sublime three dimensionality.

The next day, another was reported near Chicklade, west of Stonehenge. Five of us crowded into a car and set off, scanning the fields until spotting it. As we reached the crop circle the sun broke through, bathing the sixpetal formation in light. Near the tidy centre whorl I played my wooden recorder, when a truck bounded up and two farmers jumped out, one yelling, "This is criminal damage you've caused here!"

When we replied that we had only just arrived, he retorted, "You bloody well know you made it, and it's a right poor one, too!"

Understandably, grangers are not pleased because of lost crops. Some immediately mow them out; others, especially in "popular canvas" fields, make the best of it with a donation box. One famous glyph, shaped like a beautiful mathematical structure known as a "Julia Set fractal," appeared in daylight near Stonehenge in 1996 and reportedly netted the farmer thousands of pounds.

In a formation dubbed the "Unfinished Symphony," within sight of one of Wiltshire's eight White Horses etched on the hills, I met James Reed lugging a metal donation box, into which I dropped a few pounds.

"My fellow farmers would hang me for fraternizing with the croppies," Reed laughed.

Later that day, while I pondered the lovely swirls of another formation - two circles joined by cryptic code - poor Reed arrived again and laughed, "Well, this one was already here, so it doesn't count."

In that same glyph, I met a trio of healers and conversation ensued. "For eight years I've come to see crop circles and with all the energy lines intersecting throughout the countryside I feel that this land is important," explained Cynthia Barnard, a shaman from Boxford, Mass.

While crop formations appear the world over, that a preponderance pop up in Wiltshire is not thought coincidental. Here, rendered in stone and earth across the sacred landscape stand countless ancient stone works, the most famous being Stonehenge. Far older is the mother of all stone circles, Avebury Henge, so enormous that thatched homes encroach into the ring

Nearby is conical Silbury Hill, the largest artificial mound in Europe. So deftly constructed was this 40-metre-tall mount that it has defied 5,000 years of erosion. Directly across the highway crouches West Kennett Long Barrow, believed to be a ritual chamber and later a tomb. I reached it via a 10-minute walk across the fields, and I spotted another small crop circle.

Downing a cider at the lively Barge Inn, I met Mathew Williams, an ex-circle-maker holding the dubious distinction as the only person prosecuted for "criminal crop damage."

While explaining the thrill of the illicit art and the tricks with boards and ropes of his former avocation, the discussion unexpectedly veered to paranormal experiences that he, and other circle makers, encountered while making formations; darting light orbs, shadow humanoid figures appearing, eerie sounds and once discovering he had created a formation that a group had meditated on the previous night.

"Often circle makers don't know why they suddenly feel inspired and because of my strange experiences there seems to be a lot more going on than meets the eye." Then Matt added: "Some people are offended that humans might be the conduit, but I say that it is proof of human potential, and why deny that?"

While a fierce and often acrimonious debate swirls I, and many other enthusiasts, embrace this possibility: Perhaps crop glyphs - mathematical, spiritual, astronomical and mythic symbols - are an interactive collaboration between the collective human consciousness and another inter-dimensional intelligence to remind us of our history, of the beauty we stand to lose if we are not better stewards.

Mayfield House (mayfieldbandb. com). Located in the town of Burbage, the original section of this lovely thatched home dates back to 1460, with tennis court and swimming pool. The two ensuite rooms are cosy and plush, and Angie, the gracious hostess, serves up a sumptuous and delicious breakfast. Cost: 55 pounds per single; 75 pounds per double.

Avebury Life B&B (aveburylife. com), located in Avebury Trusloe, not far from Avebury Henge. Its proprietor, Antoinette, enjoys hosting guests who are particularly interested in crop circles as well as the spiritual, metaphysical aspects of Wiltshire. 40 to 65 pounds per night. Follets B&B (folletsbb.com) in the town of Easton Royal, offers both deluxe B&B and self-catering options, the latter in a recently converted barn with an amply equipped kitchen, Wi-Fi and private garden. 75-80 pounds per room, per night; self-catering cottages 500-700 pounds per week.

Tale of Spice (taleofspice.co.uk) After nights of eating traditional pub food, spice it up with excellent Indian cuisine in the town of Pewsey. Dinner without drinks, 6-12 pounds.

Crop Circle Connector (cropcircle connector.com): Provides the latest updates and photos of crop circle formations in the U.K. and around the world, as well as interpretations and the latest research.

The Silent Circle (silentcircle.co.uk): Website for the café and bookshop, the main gathering spot for crop circle enthusiasts to share information and experiences, and make new friends from the world over.
Posted by arclein at 12:01 AM