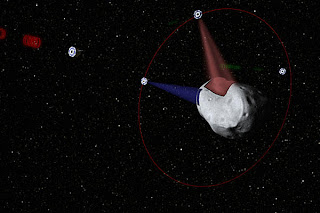 Some folks cannot resist a press release.  On top of that the economics of the material is only hinted at and as on earth, all that glitters does not pay.  If every other aspect of this adventure were paid for, I would still view it all as a suspect idea right up there with extracting gold from sea water.

However, what are the practical issues and what is possible.  A metalliferous asteroid will be substantial and perhaps several hundred feet through.  We will assume such has been located and studied and found suitable.

The first step will be to cut a shaft through the asteroid while retaining the produced material.  A mining work void will also be cut in the center for future mining.  This provides a fully protected work space and a location for the energy plant and human operators.

At this point an induction mass driver is placed in the shaft and powered up.  Two things are planned for.  The first is that produced mass can be flung toward Earth on a planned geodesic.  The second is that the repetitive firing is able to slowly alter the orbit of the asteroid which can also be useful.

Once operational uniformly sized slugs can be fired toward Earth or toward low Earth orbit.

One method that is worth considering is to fire the slugs directly through the atmosphere at a steep angle and into the ocean at one of several collection stations.  The ocean should be able to burn off the kinetic energy without breaking up the slug allowing easy retrieval from the ocean bottom.

It would be pretty spectacular to watch from a nearby observation point.

There’s gold in them there hills. You know, those ones floating around in space. Asteroids contain many tons of precious metals, making them irresistible to scientists, aerospace engineers, futurists, fiction writers … and tech billionaires.

A group of wealthy, adventurous entrepreneurs will announce on Apr. 24 a new venture called Planetary Resources, Inc., which plans to send swarms of robots to space to scout asteroids for precious metals and set up mines to bring resources back to Earth, in the process adding trillions of dollars to the global GDP, helping ensure humanity’s prosperity and paving the way for the human settlement of space.

“The resources of Earth pale in comparison to the wealth of the solar system,” said Eric Anderson, who founded the commercial space tourism company Space Adventures, and is co-founder of a new company along with Peter Diamandis, who started the X Prize foundation, which offers prize-based incentives for advanced technology development.

Nearly 9,000 asteroids larger than 150 feet in diameter orbit near the Earth. Some could contain as much platinum as is mined in an entire year on Earth, making them potentially worth several billion dollars each. The right kinds of investment could reap huge rewards for those willing to take the risk.

Outside of NASA, Anderson and Diamandis are among the most likely candidates to realize such a dream. Space Adventures has sent seven private tourists to the International Space Station while the Ansari X Prize led to a spurt of non-governmental manned spaceships.

Despite the promise of astronomical profits, the long time-scales and uncertain return on asteroid mining has historically driven most investors away from such undertakings. But the new company is also backed by a number of other billionaire luminaries, including Google’s CEO Larry Page and executive chairman Eric Schmidt, former Microsoft chief architect Charles Simonyi, and Ross Perot Jr. The venture also counts on filmmaker James Cameron, former astronaut Tom Jones, former JPL engineer Chris Lewicki, and planetary scientist Sara Seager as advisers.

Still, this new undertaking will be much larger and more ambitious than anything Anderson and Diamandis have attempted before. The hurdles are many and high. While the endeavor is technically feasible, the technology has not yet been developed. And beyond their initial steps, the details of Planetary Resources’ plans remain scarce.

The first hurdle will likely be ensuring that Planetary Resources has covered all its legal bases. While some have argued that governments need to set up specific property rights before investors will make use of space, the majority of space lawyers agree that this isn’t necessary to assure the opportunity for a return on investment, said space policy analyst Henry Hertzfeld at George Washington University in Washington D.C. Mining occurs in international seabeds — even without specific property rights — overseen by a special commission dedicated to the task, he said. A similar arrangement would likely work in space.

Platinum alone is worth around $23,000 a pound — nearly the same as gold. Mining the top few feet of a single modestly sized, half-mile-diameter asteroid could yield around 130 tons of platinum, worth roughly $6 billion.

Within the next 18 to 24 months, Planetary Resources hopes to launch between two and five space-based telescopes at an estimated cost of a few million dollars each that will identify potentially valuable asteroids. Other than their size and orbit, little detailed information is available about the current catalog of near-Earth asteroids. Planetary Resources’Arkyd-101 Space Telescopes will figure out whether any are worth the trouble of resource extraction.

Within five to seven years, the company hopes to send out a small swarm of similar spacecraft for a more detailed prospecting mission, mapping out a valuable asteroid in detail and identifying rich resource veins. They estimate such a mission will cost between $25 and 30 million.

The next step — using robots to remotely mine, possibly refine ore, and return material to Earth safely — is probably the toughest phase, and Planetary Resources is still tight-lipped about its plans here.

This is an unprecedented challenge — the only asteroid material ever returned to Earth comes from the Japanese Space Agency’s Hayabusa spacecraft, which successfully returned a few hundred dust particles from asteroid 25143 Itokawa in 2010.

One possibility might be to find a useful asteroid and push it closer to Earth. A fairly low-power solar-electric ion engine could nudge a hunk of rock into orbit around the Earth, effectively creating a small second moon that could be easily accessed.

A recent white paper (.pdf) written by a team of scientists and engineers for the Keck Institute for Space Studies looked at exactly this proposition in order to use an asteroid for scientific and manned exploration. The team concluded that the technology exists, though such a plan would need at least $2.6 billion in funding. If Planetary Resources went this route, it would rack up a large initial investment, which doesn’t include actually mining and returning material back to Earth, potentially adding many hundreds more millions of dollars.

“It’s one thing to understand the mining and refining processes and another thing to actually build it,” said JPL engineer John Brophy, who co-authored the paper. “And everything in space tends to be harder than you think it will be.”

Another option to simplify the process might be to bring the ore back to Earth for refining, though that presents its own set of challenges. Say for the sake of argument that you send a 5,500-pound robot (roughly the weight of a small car) to an asteroid and it can mine and carry back 100 times its own weight in asteroid material. On most asteroids, chopping up a one-ton chunk of regolith will generate less than an ounce of platinum. Even asteroids with the highest concentration of platinum yield only about two ounces of platinum per ton.

This means that with the current commodity prices, each of your robot miners will generate about $875,000, even on an asteroid with the highest platinum amounts. Given a mission cost that is at least hundreds of millions of dollars, it wouldn’t be advantageous to refine ore on Earth.

There are also unknown financial aspects of a successful asteroid mining operation. The sudden influx of hundreds of tons of platinum into Earth’s economy would certainly drive the commodity’s price down. Looking at historical analogues, the enormous gold and silver reserves the Spanish inherited from their New World conquests led to terrible inflation and possibly the decline of their empire.

But Planetary Resources sees a platinum price drop as one of its potential goals.

“I would be overjoyed as a company if we brought back so much platinum that the price fell by a factor of 20 or 50,” said Anderson.

Aluminum was incredibly expensive in the 1800s, before new technology allowed it to be easily separated from its ore, said Diamandis. Today, aluminum is used in hundreds of applications, something that Anderson and Diamandis would like to see happen to the platinum-group metals.

While mining platinum and other rare metals is Planetary Resource’s way of bringing wealth to Earth, the world still has ample reserves of such material — South African platinum mines alone are expected to produce for another 300 years.

Asteroids contain one substance that is of extremely high value for astronauts: water. Water can be used for drinking and it can be broken into its constituents. Oxygen is valuable for life support in space-based habitats, while liquid oxygen and hydrogen are both used to produce rocket fuel.

Rather than having to lug all the fuel for a mission out of Earth’s deep gravity well — an expensive proposition — having a “gas station” in space could help enable missions to Mars and beyond. Such a refueling depot might allow people to permanently live and work in space, another goal of Planetary Resources.

“Right now it would be like a big oil tanker dropping anchor off the coast of medieval England,” he said. “The medieval English might identify the oil as a useful commodity, but wouldn’t be able use enough to profit the tanker crew. Heck, they wouldn’t know how to get it off the tanker, except in wooden pails and rowboats.”