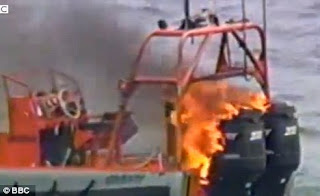 I am sure there is plenty of technology to sort out and that includes producing copious amounts of energy even without having a working fusion system supplying it.  Yet something is doable, just as we are suddenly building rail guns.  We may arrive with short range and a low throw weight but the damn things will work and if there is something that every admiral knows, it is that every weapon system begins with a small somewhat puny step and the power of incremental improvement and investment takes over.  And yes, both systems are readily retrofitted a few years hence aboard the Starship Enterprise along with the Focus Fusion reactor.  The only thing missing so far is the plasma torpedo.

The bottom line is that thus signals serious commitment and no one can resist the siren call of this hardware let alone countenance another developing the technology.

Naval grade Ray guns and Rail guns can provide a ground based point defense against any missile attack particularly since a rapid fire laser can chew through hundreds of false targets and expose real targets for the rail gun to intercept.  It will look even better in high orbit in a geosynchronous orbit.  Everything can be fried on ignition on the launch pad.

Ronald Regan will have his Star Wars defense umbrella yet and even on time and on schedule as was reasonable even back when he pronounced it.

Navy: We’re 4 Years Away From Laser Guns on Ships

The dream of sailors, nerds and sailor-nerds everywhere is on the verge of coming true, senior Navy technologists swear.  Within four years, they claim they’ll have a working prototype of a laser cannon, ready to place aboard a ship. And they’re just months away from inviting defense contractors to bid on a contract to build it for them.

Or they will be, if ONR’s plans work out as promised — not exactly a strong suit of proposed laser weapons over the decades. (Note the decided lack of blast at your side.) First step in reaching this raygun reality: Finish up the paperwork. “The contract will probably have options go through four years, but depending on which laser source the vendors pick, we may be able to demo something after two years,” says Roger McGiness, who works on laser tech for Deitchman. “Our hope afterwards is to move to acquisition.”

Translated from the bureaucrat: After the Office of Naval Research can prove the prototype works, it’ll recommend the Navy start buying the laser guns. That process will begin in “30 to 60 days,” adds Deitchman, when his directorate invites industry representatives for an informal idea session. Deitchman and McGiness plan on putting a contract out for the prototype “by the end of the year.”

If this sounds like a rapid pace of development for the ultimate in science fiction weaponry, there are two major explanations why the Navy thinks the future makes a pew-pew-pew noise. The first is technological. The second is bureaucratic.

From a technological perspective, the Navy thinks maritime laser weapons finally represent a proven, mature technology. The key point came last April, when the Navy put a test laser firing a (relatively weak) 15-kilowatt beam aboard a decommissioned destroyer. Never before had a laser cannon at sea disabled an enemy vessel. But the Martime Laser Demonstrator cut through choppy waters, an overcast sky and salty sea air to burn through the outboard engine of a moving motorboat a mile away. You can see video of the successful demonstration above.

The bureaucratic reason has to do with a decision inside the Office of Naval Research to focus its laser efforts with laser-like precision. For over a decade, it’s dreamed of creating a massive, scalable laser weapon, called the Free Electron Laser, that can generate up to a megawatt’s worth of blast power. Currently, the laser blasts 14 kilowatts of light — think 140 lamps, all shining in the same direction and at the same wavelength. A hundred kilowatts is considered militarily useful; a megawatt beam would burn through 20 feet of steel in a single second.

The Free Electron Laser has its critics, including a Senate committee. And it was sucking up all the oxygen inside the Navy’s laser efforts. So, as InsideDefense.com first reported, ONR decided, effectively, to break them up into the laser equivalent of weight classes. Generating a 100-kilowatt beam is now the province of “solid state lasers,” lasers that focus light through a solid gain medium, like a crystal or a optical fibers. The Free Electron Laser, which uses magnets to generate its beam, will stay focused on getting up to a megawatt.

That, the Navy’s scientists contend, will get an actual, working laser cannon onto a ship faster. Yes, a 100-kilowatt laser isn’t as powerful as the longed-for megawatt gun. And yes, a solid-state laser can’t operate on multiple wavelengths, while a Free Electron Laser can, making the mega-laser more useful when the sea air is full of crud and pollution. But the Office of Naval Research says that lots of active, near-term threats to ships will be vulnerable to the 100-kilowatt, solid state laser.

There’s another advantage to developing a less-powerful laser first. The Navy’s surface ships don’t yet have the power generation necessary for spooling up a megawatt-class laser — or at least not if they don’t want to potentially be dead in the water. That’s one of the reasons the Senate Armed Services Committee is skeptical of the Free Electron Laser. It’s not clear that the ships can cope with diverting 100 kilowatts of power, either, but the Office of Naval Research thinks they can, and the laser geeks are “working closely” with the Naval Sea Systems Command to make sure the scientists are writing checks that the ship’s generators can cash.

But perhaps even more important is the fact that the Navy brass is on board with a concerted push for a new generation of shipboard weapons. “This was a decision by the Office of Naval Research,” Deitchman says, “that was approved and supported by senior Navy leadership.” The Navy may be set on a smaller fleet, but apparently it wants that fleet making pew-pew-pew noises.