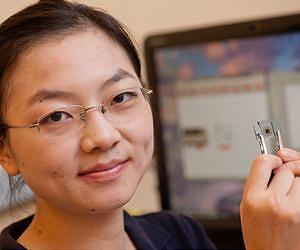 It appears that a carpet of nanotubes can be used to replace platinum in situations needing catalytic activity.  Early days of course but still very promising.

Over the past few years, physics has been winkling out a whole new tool box that while once only imagined was also pretty unattainable but imaginable.  Now the tricks keep coming and the promise keeps expanding.

I had anticipated rapid knowledge expansion after the advent of the internet but no one can ever imagine the details.  A lot of it is expanding slowly but generally every hand on board is continuing to find ample work.

This will be known as the golden age of physics.

Forests of carbon nanotubes are an efficient alternative for platinum electrodes in dye-sensitized solar cells (DSC), according to new research by collaborators at Rice University and Tsinghua University.

The single-wall nanotube arrays, grown in a process invented at Rice, are both much more electroactive and potentially cheaper than platinum, a common catalyst in DSCs, said Jun Lou, a materials scientist at Rice. In combination with newly developed sulfide electrolytes synthesized at Tsinghua, they could lead to more efficient and robust solar cells at a fraction of the current cost for traditional silicon-based solar cells.

Lou and co-lead investigator Hong Lin, a professor of materials science and engineering at Tsinghua, detailed their work in the online, open-access Nature journal Scientific Reports this week.

DSCs are easier to manufacture than silicon-based solid-state photovoltaic cells but not as efficient, said Lou, a professor of mechanical engineering and materials science.

“DSCs are sensitized with dyes, ideally organic dyes like the juices from berries - which some students have actually used in demonstrations."

Dyes absorb photons from sunlight and generate a charge in the form of electrons, which are captured first by a semiconducting titanium oxide layer deposited on a current collector before flowing back to the counter electrode through another current collector.

Progress has been made in the manufacture of DSCs that incorporate an iodine-based electrolyte, but iodine tends to corrode metallic current collectors, which "poses a challenge for its long-term reliability," Lou said.

Iodine electrolyte also has the unfortunate tendency to absorb light in the visible wavelengths, "which means fewer photons could be utilized," Lou said.

So Tsinghua researchers decided to try a noncorrosive, sulfide-based electrolyte that absorbs little visible light and works well with the single-walled carbon nanotube carpets created in the Rice lab of Robert Hauge, a co-author of the paper and a distinguished faculty fellow in chemistry at Rice's Richard E. Smalley Institute for Nanoscale Science and Technology .

"These are very versatile materials," Lou said. "Single-walled carbon nanotubes have been around at Rice for a very long time, and people have found many different ways to use them. This is another way that turns out to be very well-matched to a sulfid-based electrolyte in DSC technology."

Both Rice and Tsinghua built working solar cells, with similar results. They were able to achieve a power conversion efficiency of 5.25 percent - lower than the DSC record of 11 percent with iodine electrolytes a platinum electrode, but significantly higher a control that combined the new electrolyte with a traditional platinum counter electrode. Resistance between the new electrolyte and counter electrode is "the lowest we've ever seen," Lou said.

There's much work to be done, however. "The carbon nanotube-to-current collector still has a pretty large contact resistance, and the effects of structural defects in carbon nanotubes on their corresponding performance are not fully understood, but we believe once we optimize everything, we're going to get decent efficiency and make the whole thing very affordable," Lou said. "The real attraction is that it will be a very low-cost alternative to silicon-based solar cells."

The project was supported by the National High Technology Research and Development Program of China, the Welch Foundation and the Faculty Initiative Fund at Rice. Read the paper here.