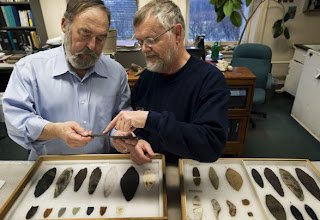 There are two realities that must be considered here. The first is that seamanship was well developed and boat building was already quite skillful and certainly good enough to consider a summer trip into the unknown.

The second reality was that the sea level was three hundred feet lower. This meant that the Bay of Biscay and the North Sea were both Plains and so were the Grand Banks. That alone cut a large chunk of distance out of the equation by at least a third. It is also possible that some portion of the Mid Atlantic Ridge was also in place as a transit point.

It is obvious that a large open skin boat as was used by the Inuit would easily allow movement along the Ice Edge and the ability to hunker down in the face of bad weather on the ice itself. At the same time, plenty of seals would provide ample ready supplies. Sooner or later, someone would be brave and go and do it. Recall also that this movement was against an incoming current, thus a rapid retreat was completely possible.

The evidence for large skin boats date back at least 20,000 years on both the Atlantic side and the Pacific side. Neither trip was easy, but the capability existed and in both cases it demanded working with ice fronts. Yet this certainly feasible and we have the additional knowledge from archeology in Siberia that upper body strength was the most robust ever noted. This is a sure sign of aquatic adaptation.

When the crew of the Virginia scallop trawler Cinmar hauled a mastodon tusk onto the deck in 1970, another oddity dropped out of the net: a dark, tapered stone blade, nearly eight inches long and still sharp.

Forty years later, this rediscovered prehistoric slasher has reopened debate on a radical theory about who the first Americans were and when they got here.

Archaeologists have long held that North America remained unpopulated until about 15,000 years ago, when Siberian people walked or boated into Alaska and then moved down the West Coast.

But the mastodon relic found near the mouth of the Chesapeake Bay turned out to be 22,000 years old, suggesting that the blade was just as ancient.

Whoever fashioned that blade was not supposed to be here.

Its makers probably paddled from Europe and arrived in America thousands of years ahead of the western migration, making them the first Americans, argues Smithsonian Institution anthropologistDennis Stanford.

“I think it’s feasible,” said Tom Dillehay, a prominent archaeologist at Vanderbilt University. “The evidence is building up, and it certainly warrants discussion.”

At the height of the last ice age, Stanford says, mysterious Stone Age European people known as the Solutreans paddled along an ice cap jutting into the North Atlantic. They lived like Inuits, harvesting seals and seabirds.

The Solutreans eventually spread across North America, Stanford says, hauling their distinctive blades with them and giving birth to the later Clovis culture, which emerged some 13,000 years ago.

When Stanford proposed this “Solutrean hypothesis” in 1999, colleagues roundly rejected it. One prominent archaeologist suggested that Stanford was throwing his career away.

But now, 13 years later, Stanford and Bruce Bradley, an archaeologist at England’s University of Exeter, lay out a detailed case — bolstered by the curious blade and other stone tools recently found in the mid-Atlantic — in a new book, “Across Atlantic Ice.”

“I drank the Solutrean Kool-Aid,” said Steve Black, an archaeologist at Texas State University in San Marcos. “I had been very dubious. It’s something a lot of [archaeologists] have dismissed out of hand. But I came away from the book feeling like it’s an extremely credible idea that needs to be taken seriously.”

Other experts remain unconvinced. “Anyone advancing a radically different hypothesis must be willing to take his licks from skeptics,” said Gary Haynes, an archaeologist at the University of Nevada-Reno.
At the core of Stanford’s case are stone tools recovered from five mid-Atlantic sites. Two sites lie on Chesapeake Bay islands, suggesting that the Solutreans settled Delmarva early on. Smithsonian research associate Darrin Lowery found blades, anvils and other tools found stuck in soil at least 20,000 years old.

Displaying the tools in his office at the National Museum of Natural History, Stanford handles a milky chert blade and says, “This stuff is beginning to give us a real nice picture of occupation of the Eastern Shore around 20,000 years ago.”

I think that this is a very plausible theory. I have read their book, published this year; and I do find a lot of compelling arguments in support of the theory--ALL WITHOUT BIAS. That's right, all without any kind of bias. This theory is only to present another prehistoric human-traveling route to the Americas. The fact that some of the oldest artifiacts were found on the east coast; and the artificats get younger and younger, the more west one proceeds, is a big argument for it. There are many other theories on prehistoric LGM-era migrations to the Americas; and let me be one to say that all of them are more than plausible. The Solutrean migration is one of them in which the east coast of what is now the United States was visited and settled by the Solutreans. I do understand that traveling across the Atlantic would be difficult; but the fact that the sealevel was noticeably lower, the Solutreans knew of more food-related hunting areas along the ice sheets, and that the mode of manufacture of the spearpoints on both sides of the Atlantic were far too similar to be a coincidence, heavily gives the Solutrean hypothesis merit. Everyone should have an open mind to this theory.

Besides, they used Kayaks and larger skin boats, allowing them to operate on the edge of the Ice Flows and the huge seal herds. The same tools worked on the Alaskan coast which is likely far more difficult. There was no intervening mountain ridge.