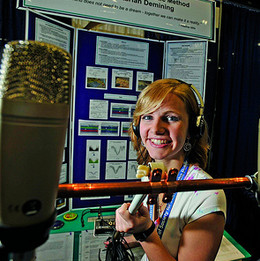 This device also sounds like it could be a lot more sensitive than clear on the first take.  It really should be detectable at some distance and from any angle if we experiment enough.  Seismic waves travel well and easily activate resonance.  The response is not easily suppressed or muffled and detection could be like spotting a glow in the dark.

We do not get that easily with electromagnetic systems.

On top of that every land mine is a manufactured device with a range of natural resonances that provide a repeatable signature.  A tin can will look different from a claymore while the EM signature will not.

In fact every device should have its own tune and the task is to also generate a variable seismic signature to amplify the signature.

The interesting question is whether this approach is already been used and perhaps long since perfected.  Many neat solutions are often reinvented many times.

Seventeen-year-old Marian Bechtel has invented a prototype for a new land-mine-detection device that uses sound waves to identify where deadly mines are buried.

The invention earned her a spot as a finalist in the 2012 Intel Science Talent Search.
Land mines have been on Bechtel's mind since the eighth grade.

"My parents are both geologists," Bechtel tells Co.Exist. "Years ago they got connected with an international group of scientists working on a project called RASCAN, developing a holographic radar device for detecting land mines. During the summer before eighth grade, I met all of these scientists and talked with them about their work and the land mine issue. I was really touched and inspired by what they had to say, and wanted to get involved in science and possibly land mine detection."

The inspiration for her detection device came from an unlikely source: piano lessons.

"I noticed that when I played certain chords or notes on the piano, the strings on a nearby banjo would resonate," says Bechtel. "I heard this, and it was almost like the story of the apple falling on 's head — I thought that maybe I could use the same principle to find land mines. So, I began doing research and talking with scientists in humanitarian de-mining and acoustics; three years later I had built a prototype."

Bechtel was rewarded with a $25,000 fellowship from the Davidson Institute for Talent Development for her innovative creation:

"With Marian's method, two high-sensitivity, non-contact microphones are swept above buried land mines that resonate in response to a remote seismic source. The recorded sound is noise-cancelled in real-time, creating a characteristic, audible null in the noise-cancelled waveform that isolates the mine's location. This efficient and inexpensive method could make important contributions to humanitarian de-mining," the institute describes.

Watch the smart teen talk about war and peace below.

I am of the opinion that focusing on UN IPCC funded search for proof of anthropogenic global warming takes attention away from water pollution, environmental toxins and mining destruction ; and will lead to international tax on energy being the road to nations' loss of both funds for adaptation and research. Nor do I accept representations that scientists' alleged consensus is better than a case of them being told what they believe.
Stories like http://joannenova.com.au/2012/04/the-incredible-power-of-clouds-and-roy-spencers-work/ poke too many holes in hypothetical simplifications applied to modelling predetermined objectives.
Meanwhile representations as to the integrity and intelligence of those cautioning skepticism are assaulted in themes taken from political psyops representing all differences as those presented as 'Denial' - a Christian pejorative.
Despite that I am very impressed with your selection of material as 'news'. This story is a good example of our hope for the future in changed objectives.