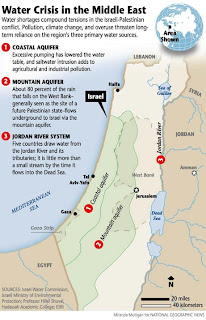 Mendacious attacks on Israeli water policy has been going on forevermore.  I caught a whiff of it even as a high school student.  Ongoing investment in water by Israel has succeeded in providing not just real water security but now exportable water.  All the while  with a rapidly expanding population base and a demanding industrial expansion.

In the meanwhile, their opponents have preferred to pay little attention to water needs from all appearances while continuing to remain in technical ignorance by and large.  This is generally unacceptable.

Israel was a wasteland due to Arab and Turkish controlled hyper feudalism unleavened by
resident boots on the ground able to stop the looting.  This was in place for at least a thousand years and the country was fully depopulated and outright despoiled as a direct result.  After all, it you have a better hoe than I have, I simply take it from you because I can.  The return of the Arabs to this wasteland was inspired by the fresh creation of jobs in the newly emergent Israel.

The same thing is presently happening in Dubai for the same reasons.

The bottom line is that Israel brought sound water management and massive investment in the resources they found in place.

http://frontpagemag.com/2012/04/19/israel-palestinians-and-water-libel/
On December 13, 2011, the French National Assembly issued a 320-page report entitled, The Geopolitics of Water, which dedicated 20 pages to an alleged “water war” between Israelis and Palestinians.  Employing the incendiary terms “apartheid” and “water occupation,” the report’s lead author, Jean Glavany, accused Israel of usurping Palestinian water sources and showing favoritism to 450,000 “colonial” settlers who purportedly “use more water than [the West Bank’s] 2.3 million Palestinians.”

The report won immediate praise from Palestinian Water Authority Director Shaddad Attili (who made similar allegations in a 2011 Jerusalem Post op-ed).  Harper’s Magazine likewise reviewed it favorably, as did the ever-reliable Counterpunch, which proposed the delusional hypothesis that Israel’s security barrier “closely follows the line of the Western Aquifer” as part of a sinister plot to divert “Palestinian” water to Israel.  (Just for the record: (i) the Western Aquifer discharges most of its water beneath Israeli territory, where it has been readily accessed since the 1920s; (ii) the “line” Israel’s security barrier most “closely follows” is that separating would-be Palestinian terrorists from their intended Jewish victims; and (iii) Jews living behind this barrier, but beyond the 1949 Green Line, get their water from Israeli — not Palestinian — sources.)

The mendacious French report is hardly the first word on this subject.  In May 2008, National Geographic gave two thumbs down to Israel’s life-sustaining desalination plants, pointing out that fossil fuels are needed to run them (thereby threatening the planet), that they produce water that is “too pure” (thereby threatening the integrity of water pipes) and that they are vulnerable to terrorist attack (not to give anyone any bright ideas).  Far worse was a 2009 Guardian “exposé” entitled, “Who will save Gaza’s children?” wherein Victoria Brittain claimed that Israeli water policy had exposed Gazan newborns to toxic levels of nitrates, thereby causing an “exceptionally high” incidence of “blue baby syndrome.”  In fact, the number of cases of “blue baby syndrome” — the lethal form of the medical condition “methemoglobinemia” — stands at zero.  (Although mild, non-lethal cases of methemoglobinemia have occurred in Gaza, the high nitrate levels that cause them are attributable to flawed Palestinian fertilizing methods, not to Israeli water policy.)

Collectively dubbed the “water libel,” by Jerusalem Post blogger, Petra Marquardt-Bigman, the above reports are unified by their devil-may-care attitude towards established facts. Relying on Palestinian Water Authority and Joint Israeli-Palestinian Water Commission documents, Visser and Shaked have wholly debunked Shaddad Attili’s accusations.  For example, Attili claimed that Israelis consume four times more water per capita than Palestinians.  The reader will reach the same conclusion — provided he uses Attili’s calculus, which (a) overestimates Israeli usage per capita by nearly 100% (280 cubic meters annually versus 150); (b) underestimates Palestinian usage by more than 50% (60 versus 140) and (c) grossly overestimates the Palestinian population by counting 400,000 Palestinians living in Israel (where they use Israel’s water supply), as well as another 400,000 living abroad.

As for the French National Assembly report, it turns out that Monsieur Glavany systematically evaded essential facts with an aplomb not seen in his country since the second Dreyfus trial.  Moreover, he interpolated a number of venomous inaccuracies into the report at the 11th hour without notifying his co-authors, all of whom disavowed his claims on reviewing the final text.

So what precisely are the facts?  A useful starting point would be to mention that under Jordanian rule prior to 1967, only 1 in 10 West Bank households were connected to running water, and that today, owing to Israeli water policy, the figure stands at 96% (and will soon rise to 98.5%.).  Secondly, Palestinians steal Israeli water (not the other way around as alleged by Attili and Glavany), while Israel exports volumes to the West Bank greatly in excess of what is mandated by the Oslo Accords.  (Israel does so primarily to compensate for the Palestinian Water Authority’s repetitive failure to implement approved water projects and its substandard maintenance and security procedures, which result in the loss of an estimated 33% of the Palestinian water allotment annually.)

Mainly because it doesn’t waste time on such mundane tasks as developing and maintaining its water resources, the PWA and its director have abundant time to level false charges against Israel.  And mainly because Israelis aren’t doing any of the things of which they stand accused, they’ve had abundant time to work on the region’s very real water crisis.  Indeed, they’ve been working on it since before Israel was a state.  It was the Jewish community that drained the swamps of Mandatory Palestine’s coastal plain in the 1920s in order to access springs from the Western Aquifer which lay beneath.  In 1937, this same community founded the Mekerot (or national water company).  Since that time, they’ve attacked the water problem from multiple angles.  For example, “drip irrigation” methods pioneered by Israel in the 1960s, deliver water to plant roots with an efficiency approaching 80% (double the rate seen with open irrigation), and newer “sub-surface irrigation” techniques do even better.  Because the country is mostly arid, Israel built its National Water Carrier (1964) to transport water from areas of higher rainfall near Lake Kinneret to the parched Negev, thereby transforming desert areas into productive agricultural land.  Israel recycles 75% of its wastewater (6x the rate of its nearest competitor), and employs the recovered water in agriculture.  They have developed airborne drones that detect leaks in water pipes via water meter alarm systems and a “curapipe” process that seals “pinhole” leaks before they are even detectable.  Hi-tech “SmarTap” faucets reduce household water consumption by 30% with patrons scarcely noticing.

Israel’s most ambitious program, however, is its “Desalination Master Plan.”  Initiated in 2000, its goal was to build state-of-the-art “reverse osmosis” desalination plants along the Mediterranean coast capable of producing 400 million cubic meters of potable water annually by 2005.  (By 2020, the figure is projected to be 750 million cubic meters).  The first reverse osmosis plant — then the largest of its kind worldwide — opened in Ashkelon in 2005 with a capacity to produce 100 million cubic meters annually at a cost of 52 cents per cubic meter.  (Natural drinking water actually costs more since it must be processed.)   A second plant opened in Hadera in 2010, and when the Soreq and Ashdod plants go on-line in 2013, Israel’s desalination plants will account for 85% of Israel’s household water consumption and turn the state into a water exporter.

Abroad, Israeli technology companies have built more than 400 desalination plants in 40 countries.  India has embarked on a pilot project relying on Israeli expertise, and China has signed a deal with Israel’s IDE technologies to build a “Green” desalination plant that desalinates via evaporation and condensation.

While Palestinians blame Israel, Israelis work on innovative solutions.  This March, the Palestinian Water Authority petitioned the World Water Forum to fund a $450 million desalination plant in Gaza.  Within 24 hours, Israel offered to lend its expertise to the project.  Perhaps an Israeli-Palestinian “water war” is occurring – but it isn’t being waged by Israel.

Jack Schwartzwald is a Clinical Assistant Professor of Medicine at Brown University and author of Nine Lives of Israel (McFarland, 2012).