Going Beyond Vimy with David Frum 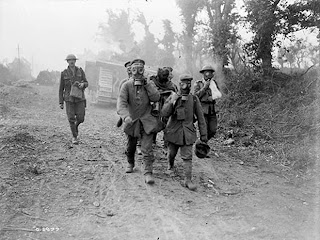 I am posting this item because so few in the know anything about the final defeat of the German army in 1918.  All countries tend to tell their own story and this often clouds facts on he ground particularly when it comes to warfare.

The previous year, the allies discovered that the highly trained battle hardened Canada Corp of four full divisions could punch through any German position on a front several divisions wide and chew up the German Army in the Process.  This was confirmed at Vimy Ridge (First Significant Allied victory) and at several other battles during 1917.  Vimy Ridge was arguably the best defended strong point on the Western Front and had seen off major assaults.

Thus when the returning German Eastern Armies allowed the Germans to launch a spring offensive in 1918, the British Army fell back slowly to allow the German Army to outrun its logistical tail while specifically preserving the Canada Corp for the Counterattack.  This came at the battle of and the Canadian led attack hurled the extended German forces back an astonishing eighteen miles while destroying or damaging an opposing force of over thirty German Divisions.  Please note here that German divisions were typically depleted compared to allied divisions because of a tradition of not replacing losses by merging with other units.  Presume instead that the opposing forces were closely enough matched.

At that point the Canada Corp broke of contact and shifted to another point of decision and attacked again while reserve units took over the vacated line.  This continued for several separate attacks in which it became totally clear to the German leadership that they had no answer to a Canadian planned assault.  It got so bad that they actually gave up a position in one locale to avoid losses.  All through this the German Army was attempting to fall back on a defensible line known as the Hindenburg line.

About half way through the ongoing attacks of the Canada Corp it became pretty clear that the Germans had no answer and the whole allied front switched over to a general advance and pursuit albeit into an orderly German retreat with plenty of fighting.  At this point the full weight of the American Army and every other army was applied making the position of the German Army impossible.  The war itself ended effectively when the Canada Corp unexpectedly breached the Hindenburg line to make the last hope untenable.

The historical reality is that the German Army was defeated in a rout on the battle field at , attempted to retreat to the Hindenburg line and in the process lost half of its effective divisions.  The Canada Corp did not do this all by itself, but it turned the tide of battle decisively allowing the pressing allied armies to roll up the German army without respite.

For what it is worth, that is how the story is told in also.  Most commentary has made much of the advent of American numbers but that forgets that the peace treaty with released for Germany at least an additional one million men to the Western Front.  So we were easily looking at another year at least of unpleasant fighting or worse if had been able to close the Channel somehow.  Had the Canada Corp been unable to seize the initiative, all sorts of options open up for the German Army including concentration in front of the green American Army and ripping that apart.  That would have left three severely demoralized allied armies on the field and a howl for peace everywhere.  The bottom line is that the heroics of the Canada Corp was decisive in a 1918 end to the war that could easily have staggered on for two more years.

ho remembers the of ? Yet it was this battle that broke the spirit of the German Army in the West.

You could learn a lot about ’s national psyche from the country’s enduring fascination with the battle of Vimy Ridge, fought 95 years ago this past week.
Canadians fought dozens of major battles during the First World War. Yes, Vimy was the most tactically spectacular: One of the best-planned, best-executed Allied operations of the whole war. Vimy fully deserves the honour it carries in the national memory.
But the exclusive attention to Vimy obscures other Canadian achievements even more deserving of honour.
Who remembers now the of in August, 1918? Yet it was this battle that broke the spirit of the German Army in the West. German troops broke and ran before a Canadian and Australian-led assault: the first German rout of the war. Between August and November, Canadians spearheaded a sequence of attacks that destroyed the German army’s will to fight.

Those battles — collectively known as the Hundred Days — have been brilliantly summarized in a short book that, if it were up to me, would be assigned to every high school student in Canada: Shane Schreiber’s Shock Army Of The British Empire.
By Schreiber’s tally, the 100,000 Canadians who fought in the Hundred Days met almost one-quarter of the entire remaining German army on the Western Front: Forty-seven German divisions against four Canadians. The Canadian forces fought alongside an Australian/New contingent. The three Dominions together engaged some 40% of the German army.
Over those three months, the Canadians suffered more than 45,000 casualties, killed and wounded — or about as many as in the whole year from D-Day to VE-Day in World War II.
Being a Canadian, of course, Schreiber underscores his point with a final statistical comparison to the forces in the Meuse-Argonne region on the southern portion of the Western front.
Troops engaged
Americans: 650,000
Canadians: 105,000
Duration of Operations
Americans: 47 days
Canadians: 100 days
Maximum Distance Advanced
Americans: 34 miles
Canadians: 86 miles
German Divisions Defeated (out of a total of 200)
Americans: 46
Canadians: 47
Average Number of Casualties Suffered per German Division Defeated
Americans: 2,170
Canadians: 975
Total Casualties
Americans: 100,000
Canadians: 45,830
“The ultimate conclusion that must be drawn,” Schreiber sums up, “is that … the Canadian Corps was able to make a highly significant contribution to the defeat of the German army on the battlefield at precisely half the cost in terms of life and limb as the American army.”
Unlike Vimy, the Hundred Days was a strategic as well as tactical victory.
And while few would dissent from John Moore’s verdict in Friday’s National Post that the First World War should never have been fought, it’s also true that once fought, it was vital that the Western democracies win. A German victory would have locked an exploitative military dictatorship in control of the whole continent of — a point now agreed by German historians fully as much as non-Germans. Canada’s indispensable contribution to that victory ought to be a matter of national pride, to be celebrated gloriously in the now-impending centennial of the First World War.
But how? Not with more wreath-laying. The last veterans of the First World War are gone, and will be longer gone in August, 2014. What we owe them now is not only sympathy for their sacrifices, but remembrance of their military achievements: a national commitment to remembrance that should carry on through the whole period of the anniversary, and culminate — not in April 2017 — but on November 11, 2018, the centennial of the day that Canadian troops liberated the Belgian town of Mons, firing what is often described as the last shot of the First World War.
This anniversary offers an opportunity to rediscover ’s heritage as a war-fighting and war-winning nation — in wars that, because won, made possible the free, democratic and peaceful of the 21st century.