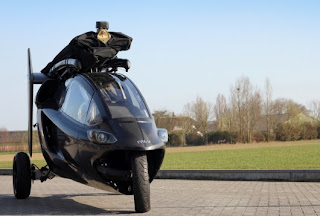 Take a close look at this.  It reminds me of the Mcculloch Autogyro put together back in the sixties as it uses the exact same configuration as also the Ayro Gyro of the same time.  A push prop to drive velocity and an inexpensive rotor to act as the lifting device without attempting to actually power it which swiftly drives up costs.  The Avro did a neat trick of first speeding up the rotor to near lift speed so that once it switched over to forward motion it readily jumped into flight in less that fifty feet on its ground effect cushion.  A little extra weight and a belt drive, but worth it.

The other thing that can be done today is to have an autopilot in place that is able to handle the switchover to autopilot when the power inevitably fails.  It is too much to expect a pilot to remain up to training skill with a skill only to be used in an emergency.  It is better to default into autogiro mode when needed.

Those two fixes can make this a great aircraft that can be flown out of a back yard and landed in a parking lot.

This bird may finally realize the promise of the autogyro for safe inexpensive flight.  Since it is basically meant to mostly fly over a developed and settled landscape, it is able to land on any appropriate flat space including any roadway.  That is what makes flying this craft so safe.  An escape is at hand and likely safer than an icy road. 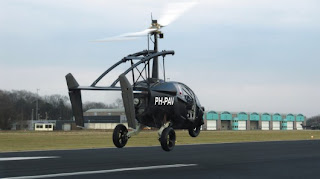 The PAL-V takes to the air on a successful test flight (Photo: PAL-V)

With the PAL-V last appearing on our pages way back in 2004, you’d be forgiven for thinking that this is just another flying car concept that never made it off the ground. But Dutch company PAL-V Europe NV has been busy in the past seven years having finalized the design concept in 2008 and testing a driving prototype in 2009. Now the flying-driving prototype has been put through its paces with video of the PAL-V’s recent successful maiden flight now released.

Although the finished vehicle looks slightly different to the computer renderings available in 2004, the design remains pretty much the same. On the ground the two-seater PAL-V is an aerodynamic tilting three-wheeler that is designed to combine the handling of a motorbike with a mechanical-hydraulic dynamic tilting mechanism automatically adjusting the tilt angle of the vehicle while cornering.

To convert from automobile to airplane, the vehicle’s engine must be brought to a stop – no Transformer-like transition on the go unfortunately. The tail is then extended and the rotor unfolded in a process that takes less than 10 minutes. Upon starting the engine the foldable push propeller emerges from the rear of the cabin to provide the forward thrust. To go from aircraft to automobile, the process is simply reversed.

Designed to generally operate below 1,200 m (4,000 ft), the PAL-V flies within the airspace reserved for uncontrolled Visual Flight Rules (VFR) traffic, meaning it can take off in many countries without filing a flight plan. The company points out that governments in the and are examining the development of “digital freeways” that use GPS technology to provide a safe corridor for such vehicles.

Flying like a standard gyrocopter, the PAL-V’s main rotor has a slower rotation than a helicopter, making it quieter and giving it the ability to take off and land at lower speeds. The company says it is also easier to control and cannot stall and, even if the engine fails, it can be steered and landed safely as the rotor keeps auto rotating.

Having conducted successful test flights, the PAL-V team will now focus on the design of the first commercial model PAL-V, with first deliveries expected in 2014. PAL-V Europe says law enforcement agencies, the military, and flying doctors have already expressed interest in the vehicle.