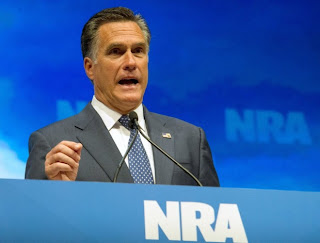 This item is a pretty decent consideration of the prospects of the upcoming possible Romney Presidency.  There are a couple of assumptions in all this and of course, Obama may find a way to pull his presidency into another term  Yet the fact remains that he was elected in a cocoon in which he was effectively an unknown all the way through.  That is no longer true and his one policy success bought by accepting every demand is on the way to been shut down by the weight of the contradictions.  The Medicare project is as likely to be a huge liability by Election Day.

After that, the weak appeal to women voters is about to be reversed by the Mommy wars spun up inadvertently by the Dems who are running for cover.  Also expect to see Palin jump on the bandwagon to mobilize the Republican base.  All this will easily shift those numbers by Election Day.

More likely something will go wrong in the and Obama will be shown to be flat footed and he will never recover from even the slightest hint of stupidity.  He is in the unpleasant position of his successes been unaccredited and a sniff of failure instantly overstated.

Mitt Romney, if elected president, will be Reagan without the fetters of a mulish Democratic Congress.

Romney will be ’s most free-market president

Mitt Romney is now the presumptive Republican nominee for president of the , to the chagrin of some who question his conservative credentials. Those doubters can chew on this: As president, Mitt Romney would almost surely become the staunchest free-market Republican president in history, more so than even Ronald Reagan.

Teddy Roosevelt, one of the most popular Republican presidents of all, was not only protectionist, he is known as the first “progressive” president, an inspiration to many Big Government politicians in today’s Democratic Party, including President Barack Obama.

Of the modern Republican presidents, Eisenhower and Nixon did espouse free enterprise and did reduce the size of government, which had grown immensely under FDR’s New Deal, the Second World War and the Korean War. But they also had Big Government conceits. Eisenhower oversaw the single greatest expansion of Social Security in history, his Interstate Highway System was the largest infrastructure program in U.S. history, and he resisted pressure to cut taxes, leaving office with a top marginal income tax rate of 91%.

Nixon was a free-market menace, imposing wage and price controls, creating the Environmental Protection Agency, and vastly expanding bureaucratic regulation over the environment and the workplace. Few see either of the two Bush presidencies as exemplars of free markets.

That leaves Reagan, arguably the only free-market Republican president ever and certainly the fiercest. In his first inaugural address, he famously declared that “government is not the solution to our problem; government is the problem,” and he spent the next eight years trying to cut government down to size.

In the Reagan years, the top income tax rate dropped first from 70% to 50% and later to 28%, and government regulation fell out of favour. The result was the largest peacetime economic boom in American history.

But Reagan’s free-market record also left much to be desired. Government spending increased by one-third under Reagan, the gross government debt tripled, and the size of the civil service grew by 230,000. Reagan also relied on trade protectionism. On his watch, quotas and so-called “voluntary restraints” on trading partners doubled the value of imports subject to restriction. Even his great tax-cutting record was marred by tax increases — the period between his two great federal income tax cuts saw two tax increases that, taken together, amounted to the biggest tax increase ever enacted during peacetime.

Why his inconsistent record? Congress at the time was controlled by the Democrats, curbing Reagan’s hands in adopting many of the free-market policies he so clearly favoured. A president Romney would labour under no such constraints. If current polls accurately predict the November election, he will be governing with clear majorities in both Houses of Congress — Houses that have a strong Tea Party mandate, giving him the mandate and the wherewithal to fulfill his campaign promises. Those promises far exceed Reagan’s goals.

Romney promises not only to restore Reagan’s top income tax rate of 28% but also to eliminate for most Americans all taxes on capital gains, interest and dividends. He promises to reduce the size of government to 20% of GDP — less than it was under Reagan. He promises to eviscerate or eliminate the Department of Education by sending most of its functions to the states — Reagan had wanted to abolish the Department of Education, but instead saw it greatly expand under his watch.

Romney, in fact, promises to question the need for every governmental function. “My test for the federal government is this: Is this program so critical, so important that it’s worth borrowing money from to pay for it?” he asks. On this rationale, he will be scrapping many programs, to keep another promise — to balance the budget and reduce the government debt.

Romney, if elected president, will be Reagan without the fetters of a mulish Democratic Congress. After being elected governor of , Romney had his aide record all of his campaign promises — he had 92 of them. Two years into his term, he published his list along with all the actions he had taken to fulfill them — all 92 of them were checked off as completed.

If Romney still has that same aide, and the same record of keeping his promises, he will become the most free-market Republican President in American history.