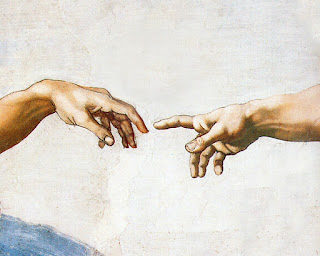 I am going to post an interesting question.  Does life follow God or does God follow life?  For most of human history this question had exactly one answer.  That God was and is the master with a small codicil for those who simply deny the existence of God has been the received wisdom.  This all led inevitably to the conflict over the idea of predestination.

We now have a radically different answer.  We are now informed that we are approaching technological singularity in which we effectively create GOD as a construct of our own technology.  Listen carefully to what I just said.  We are already well past most of the technological hurdles that were in our way and our speed of knowledge expansion and technological mastery puts us into the singularity in about forty years.

Furthermore, GOD will naturally empower humanity to individually work to optimize his own small portion of the planet.  Thus my emphasis in looking at new ways in which to terraform the planet.  However, this also means that mankind will not wish to empower GOD to become a master but to become a local source of empowerment.  Life will be the final arbiter although such decisions are likely to be obvious anyway.

Such decisions will be made readily through the application of the rule of twelve discussed elsewhere on this blog.  Thus the correct answer in humanities’s maturity is that GOD follows life.

After all that of course, it is also obvious now that mankind has already walked this walk and that the traditional material on GOD has been hugely inspired accordingly.  I have spent a lot of effort in this blog to investigate our real history and though it is impossible to know fine detail, the stunning fact is that the Ice Age was ended by direct action of our ancestors in impacting a comet into the northern Polar Cap around 12,900 years ago.  Before they did that they evacuated the planet and moved into space habitats formed likely inside large hollowed out asteroids in which a rotating habitat at least a couple of miles across and layered like an onion could be built.  I will presume several were build or alternatively one was built and the balance of the population simply went into underground habitats on Mars and possibly the Moon.  Phobos is a prime candidate for the space habitat.

They had at least 25,000 years in which to accomplish all this before the Pleistocene Nonconformity.

After the Pleistocene Nonconformity it was necessary to allow the ice to melt out and the climate to largely stabilize and this took at least two to three thousand years.  I presume hunting bands operated during this waiting period but likely at a much reduced level and largely to the effect of eliminating surviving large creatures able to hunt humanity or interfere with agriculture.

Then the planet was reoccupied by ourselves as a specially designed type able to sustain agriculture and rapidly procreate in order to as rapidly establish agriculture wherever possible.  Thus we have the story of Noah which pretty well lays it out.  Of course the is a Magnetic field Exclusion Vessel able to bring in a large cargo to a high elevation landing field.  This was done at least several times.

Archeology tells us that this occurred around 10,000 years ago.  I expect we also had active management for perhaps 3 – 4,000 years in which all this knowledge was well understood.  Then the management withdrew fully from the planet and with the exception of indirect nudges has largely been out of the picture as we get on with the job.  This make perfect sense of course because just how motivated is a person going to be if one knows you are stuck with a nasty job until you die nastily.

The approach of the singularity tells me that we will not be left in total ignorance for much longer.  The good news is that we will all be properly empowered to optimize the Earth to provide for an ultimate population of around 100 billion.