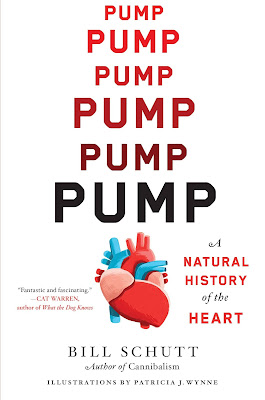 This is a short review of this book.  We have a good list of useful oddities to review here.

Understanding how the heart works is not easy and counter intuitive to most of us.  It is a perostaltic pump that squeezes the blood into the circulatory system.  Considering what it does, it is an amazing biological device.

So check through these items.

For centuries, humans have been fascinated by the heart. Aristotle believed it was the seat of consciousness; the Tin Man from The Wizard of Oz mused about how his life would change if only he had one; and poets and musicians from Shakespeare to Tom Petty to Stevie Nicks have written countless words about hearts being cold, broken, and lonely. Now, American Museum of Natural History zoologist Bill Schutt, the critically acclaimed author of Cannibalism, turns his attention to this vital organ in PUMP: A Natural History of the Heart (Algonquin Books: Sept 21, 2021).

PUMP explores the mysteries and wonders of the literal heartbeat of life on earth. This is the first book to present in-depth natural histories of both the human heart and the hearts of dozens of diverse animal species ranging from worms to alligators to bats to sea squirts.  PUMP is an illuminating journey that shows how the heart has become the core of not only the circulatory system, but also the natural world.

From a Canadian museum where Schutt examines a rare, preserved blue whale heart the size of a golf cart to New England beaches where horseshoe crabs are being harvested for their life-saving blood to labs where he encounters frozen hibernating wood frogs, PUMP takes readers on a fantastic trip around the world, telling an incredible story of evolution and scientific process. Readers journey with Schutt through human history, too, as philosophers and scientists hypothesize, often wrongly, about what makes our ticker tick. The book traces humanity’s cardiac fascination from the ancient Greeks and Egyptians, who believed that the heart contains the soul, all the way up to modern-day laboratories, where scientists use animal hearts and even plants as the basis for many of today’s cutting-edge therapies. Schutt interviews notable doctors, researchers, and animal experts, revealing unexpected anecdotes and studies including: