Magnets & the Promise of Levitating Trains 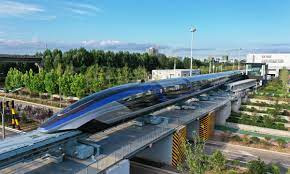 We have understood how to do this for a long time.  It has just never been cheap and ultimately demands a metal rich single track that has to use a massive amount of metal.  Usually steel but could be anything cheap and able to be magnitized.  The train has to contain all the exotic goodies and all this in order to evade friction.
There is a wonderful alternative that I could build today that does exactly the same thing.  We need to lay down a smooth flat surface between the present rail build out.  Marine plywood comes to mind.  Then we set the weight down on air pads, the same way we move massive container cranes or Railway engines caround on concrete floors.  Serious tolerances and fail safes are needed here, but a mile long train should be able to slide from the top of the pass outside of San francisco all the way to Chicago.  My take home though is that this is all possible using nineteenth centiry tech.
We still must expend energy climbing grades, but that is also true for all other systems until we deploy gravity control.
Another competant alternative is to design airships able to operate as drones and carry one hundred tons.  they still must burn energy though to move.
Yet either alternative impresses me as superipr to the Maglev system.
A Brilliant Demonstration of Magnets & the Promise of Levitating Trains (1975)
in Science, Technology | October 7th, 2021
https://www.openculture.com/2021/10/a-brilliant-demonstration-of-magnets-the-promise-of-levitating-trains-1975.html?
For a brief time in the 1980s, it seemed like trains powered by maglev — magnetic levitation — might just solve transportation problems everywhere, maybe even replacing air travel, thereby eliminating one of the most vexing sources of carbon emissions. Maglev trains don’t use fuel; they don’t require very much power by comparison with other sources of high speed travel; they don’t produce emissions; they’re quiet, require less maintenance than other trains, and can travel at speeds of 300 mph and more. In fact, the fastest maglev train to date, unveiled this past summer in Qingdao, China, can reach speeds of up to 373 miles per hour (600 kph).
So, why isn’t the planet criss-crossed by maglev trains? asks Dave Hall at The Guardian, citing the fact that the first maglev train was launched in the UK in 1984, after which Germany, Japan, and China followed suit. It seems to come down, as such things do, to “political will.” Without significant commitment from governments to reshape the transportation infrastructure of their countries, maglev trains remain a dream, the monorails of the future that never materialize. Even in China, where government mandate can institute mass changes at will, the development of maglev trains has not meant their deployment. The new train could, theoretically, ferry travelers between Shanghai to Beijing in 2.5 hours… if it had the track.
Perhaps someday the world will catch up with maglev trains, an idea over a century old. (The first patents for maglev technology were filed by a French-born American engineer named Emile Bachelet in the 1910s.) Until then, the rest of us can educate ourselves on the technology of trains that use magnetic levitation with the 1975 video lesson above from British engineer and professor Eric Laithwaite (Imperial College London), who “deconstructs the fascinating physics at work behind his plans for a maglev trains, which he first modelled in the 1940s and perfected in the 1970s,” notes Aeon. “Well-regarded in his time as both a lecturer and an engineer, Laithwaite presents a series of demonstrations that build, step by step, until he finally unveils a small maglev train model.”
Laithwaite’s small-scale demonstration would eventually culminate in the first commercial maglev train almost a decade later at Birmingham Airport. Here, he begins where science begins, with an admission of ignorance. “Permanent magnets are difficult things to understand,” he says. “In fact, if we’re absolutely honest with ourselves, we don’t understand them.” The good professor then briskly moves on to demonstrate what he does know — enough to build a levitating train. Learn much more about the history and technology of maglev trains at How Stuff Works, and keep your eyes on the Northeast Maglev project, a developing Superconducting Maglev train that promises travel between New York and Washington, DC in one hour flat.
via Aeon
Posted by arclein at 12:00 AM