The American Bumblebee Has Vanished From Eight States 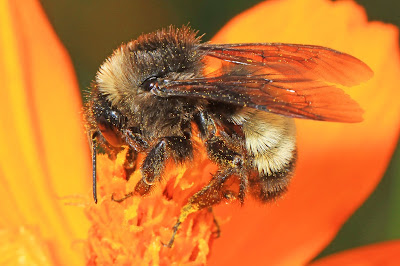 We identified the direct and obvious cause in 2007.  Bayer produced neonicotinoids used as pesticides.  They were soon banned in Europe.  Yet we are still dealing with a pesticide managed agriculture unable to avoid killing bees.

In fairness. industrial agriculture is a long way from running out of steam, simply because it attracts large capital.

so we have this particiular ecological disaster.  Clean things up and recovery will be spontaneous.

The American Bumblebee Has Vanished From Eight States

In two decades, the insect’s population has declined by nearly 90 percent due to a combination of threats, including habitat loss, pesticides and diseases

American bumblebees are a vital pollinator for wildflowers and crops, and their decline could have severe consequences for the environment.

Judy Gallagher via Wikicommons under CC BY 2.0

The American bumblebee (Bombus pensylvanicus)—once abundant and found lazily floating around in grasslands, open prairies, and some urban areas throughout the United States—now face a rapidly declining population.

According to a proposed rule released by the U.S. Fish and Wildlife Service, the species' population has dropped nearly 90 percent and could qualify for protection under the Endangered Species Act (ESA), the Independent's Graeme Massie reports. Despite dwindling population numbers, the American bumblebee is not protected in any state or by federal law.

American bumblebees are a vital pollinator for wildflowers and crops, and their decline could have severe consequences for the environment. The species has completely vanished from eight states, including Maine, Rhode Island, New Hampshire, Vermont, Idaho, North Dakota, Wyoming, and Oregon, Ben Turner reports for Live Science. The bumblebee species have declined by 99 percent in New York. In the Midwest and Southeast, population numbers have dropped by more than 50 percent.

U.S. Fish and Wildlife Service officials first conducted a 90-day review of the American bumblebee—along with the Siuslaw hairy-necked tiger beetle and the Long Valley speckled dace—and found that the species should be further studied to determine whether they should be added to the Lists of Endangered and Threatened Wildlife and Plants, per the Independent.

Depending on the results of a forthcoming year-long review, the American bumblebee could be legally protected under the ESA, which would provide rules and framework for saving the species from extinction, reports Live Science. Currently, only two bumblebee species, the rusty patched and Franklin's, receive ESA protection.

The U.S. Fish and Wildlife Service's announcement came about after an August 2021 petition for protecting the American bumblebee under the ESA was filed by the Center for Biological Diversity and the Bombus Pollinator Association of Law Students, an Albany Law School student group.

"This is an important first step in preventing the extinction of this fuzzy black-and-yellow beauty that was once a familiar sight," said petition co-author Jess Tyler, a Center for Biological Diversity scientist, in a statement. "To survive unchecked threats of disease, habitat loss, and pesticide poisoning, American bumblebees need the full protection of the Endangered Species Act right now."

Researchers can trace the bee's plummeting population numbers back to multiple threats, including pesticides, habitat loss, climate change, diseases and competition from non-native honeybees. States with the most significant dip in bee numbers have the largest increase in the use of pesticides like neonicotinoids, insecticides, and fungicides, per Live Science.

Pesticides like neonicotinoids harm the bumblebee's natural homing system, disrupt their communication strategies, and weaken their immune systems, reports Live Science. According to the Independent, the largest remaining American bumblebee populations are located in the southern Great Plains and southeastern states.

If the bee is placed under federal protection, farmers or developers who harm the insects could face up to $13,000 in fines each time one is killed, Live Science reports.