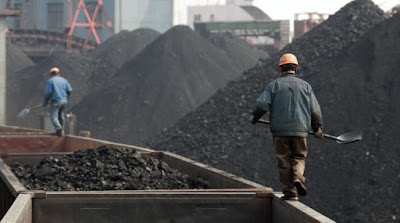 The combination of a sharp drop in hrdro power for this year at least and the loss of australian coal has produced a real energy shortfall in all of China.  This surely means extending plant shutdowns through the winter to allow for home heating.
This may also become China's new normal until they have properly corrected this problem.  The real problem that has the longest time line is coal production and contract security will take time to reestablish after their cutting off Australia.  I do think that australia has sent their coal to India.
The big problem is that China is coal dependent and been central planners, they made little provision for acts of God.  Worse, they failed to keep USA major coal production on some form of standby by maintenance contracts.  After all they never had a recession that idled plenty of standby capacity.
now they cannot bounce.
Scale of China Energy Shortage Means a Multi-Year Problem
October 8, 2021 by Brian Wang
China is indicating that raw coal production increased but it is not meeting the demand.
https://www.nextbigfuture.com/2021/10/173436.html
From January to August, 2021, 2.6 billion tons of raw coal were produced, with a year-on-year increase of 4.4 percent, an increase of 4.2 percent over the same period in 2019, and an average increase of 2.1 percent in two years; 197.69 million tons of coal were imported, a year-on-year decrease of 10.3 percent.
In August, 340 million tons of raw coal were produced, with a year-on-year growth rate of 0.8 percent instead of a decrease of 3.3 percent last month, an increase of 0.7 percent over the same period in 2019, an average increase of 0.3 percent in two years, and an average daily output of 10.81 million tons. 28.05 million tons of coal were imported, a year-on-year increase of 35.8 percent.
China coal mine production has climbed by just 6% compared with 2020.
China also has a shortage of power from hydroelectric dams because of a drought. Hydro-electric output is running at the lowest level since 2018 which is putting more pressure on coal thermal generators to make up the shortfall. The hydropower problem could last for years as the drought has to end and rains have to replenish reservoirs. This could be a multi-year drop from 1400 TWh to 1200 TWh from hydro. This is another 200 million tons per year for coal demand.
China’s electricity generation increased by 616 Terawatt-hours (13%) in the first eight months of 2021 compared with the same period last year.
China nuclear, hydro, wind and solar could rise by around 10pc, or 210TWh to 2,332TWh.
China needs close to 1 million tons of coal per terawatt-hour of electricity. China has been using about 4 billion tons of coal a year to generate about 4600 TWh of power per year. China’s total electricity usage was 7600 TWh in 2020. This is increasing to over 8400 TWh per year in 2021.
Coal prices have more than doubled to almost $210 per tonne, up from just $90 this time last year, based on the most actively traded contract on the Zhengzhou Commodity Exchange.
China has given the green light for its coal miners to increase coal production by 100 million tons over the next three months.
The US is producing about 500 million tons of coal per year. The US produced over 1 billion tons of coal per year over a decade ago. US coal production peaked in 2008. It would take years for the US to turn around and produce more coal.
Having a shortage of hundreds of millions of tons of coal production or being short 500 TWh in electricity is a huge multi-year problem.
China will need 50 million tons per month for heating.
Natural gas prices have skyrocketed in Europe.
Oil prices are over $80 per barrel.
Posted by arclein at 12:00 AM