Panasonic unveils 4680 battery for use in high-end Tesla vehicles 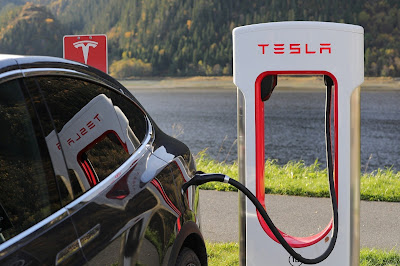 This should remind us of why folks are getting EVs.  We are seeing persistent quality improvement before our eyes with a massive capital stucture on side to roll it out.  The numbers are steadily improving and the next generation will be even better.
Everyone can live with that because even older models will be able to step up soon enough.  No EV will be truly obsolete not least because a battery upgrade is possible and the limited moving componenerts can be swapped out.  Think even the dasd board.
None of this was ever really possible with the gasoline based drive train.  Now a long term design is possible and even attractive if you design to also swap out interiors.
Panasonic unveils 4680 battery for use in high-end Tesla vehicles
OCTOBER 26, 2021 REPORT
by Bob Yirka , Tech Xplore
https://techxplore.com/news/2021-10-panasonic-unveils-battery-high-end-tesla.html?
Credit: Pixabay/CC0 Public Domain
Panasonic has announced to the press that it is ready to show off its new cylindrical 4680 battery (46 millimeters wide and 80 millimeters tall), built specifically to accommodate Tesla electric vehicle (EV) requirements. In the announcement, Kazuo Tadanobu, CEO of Panasonic's Energy Company, held up one of the prototype batteries for reporters and claimed that the new battery has five times the storage capacity of previous batteries the company has made for Tesla vehicles—each is rated at 9000 mAh. He also noted that the company will not be making lithium iron phosphate (LFP) batteries for electric vehicles.
For many years, Panasonic has been the sole provider of batteries for Tesla's electric vehicles, but recently Elon Musk, head of Tesla, announced deals with other battery makers. In response to questions about the relationship Panasonic has with Tesla, Tadanobu claimed that it is as strong as ever—the other makers will be providing the EV company with LFP batteries for Tesla's lower end vehicles.
The new battery is bigger than those Panasonic has made for Tesla up until now—it has a 46-mm diameter and is 80 mm tall. Tesla puts hundreds of them together in their vehicles as battery packs. Tadanobu claims that the batteries are 50 percent cheaper to produce, and his company expects to finish plans for mass production by March of next year, at which time they will begin delivery to Tesla. He added that the new shingle-spiral form design of the battery will allow for a 100-fold increase in production capabilities. He also noted that sales of Tesla vehicles have been so strong that the company will likely be selling as many of the batteries as they can make, claiming that development of the new battery has deepened ties with Tesla. He did not specify where the batteries will be made however. Panasonic currently operates a battery plant in Nevada for supplying its current batteries to Tesla, an advantage the company has over Chinese companies who have thus far refused to build battery factories in the U.S.
Notably, Apple Inc. has also been in talks with battery makers; the computer maker is rumored to be exploring electric vehicle manufacturing. Tadanobu declined to say whether one of those companies was Panasonic.
Posted by arclein at 12:00 AM