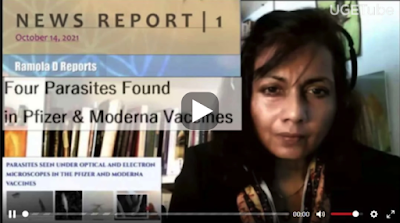 This is only possible if it is deliberate.  Literally the Cooks or Wait Staff are spitting or urrinating in our food.  No alternative explantion is possible even.
Again if it is not true, just where is the counter work on the problem?  Iti s not difficult.
It is as if every available kill agent was drummed up and blended into the vacc ine concoction in order to max out the kill.  A great evil is lose in the world.  I know it has been countered, but it is still hard to take.
Four Parasites Found in Pfizer and Moderna COVID911 Jabs
Ramola D of The Everyday Concerned Citizen is new to me and I love the way she presents information and puts things together.
She has an update for us on the now FOUR different kinds of parasite that have been imaged in the Pfizer and Moderna vials.
We've previously spoken about the findings of microscopy expert, Dr Robert Young, who published his images of the contents of the four publicly-available jabs using various methods, including Phase Contrast Microscopy, Transmission and Scanning Electron Microscopy and Energy-Dispersive X-Ray Spectroscopy. It was Dr Young who first reported to have found Trypanosoma cruzi in the vaccines.
Ramola reads recent entries in the VAERS system that corroborate Dr Young's findings. One tells of a woman who is a regular blood donor and that after her second vaccination, her blood donation tested positive for the Trypanosoma cruzi parasite, the same as what Dr Young found in the vaxx.
These parasites are transmissible by blood and organ donation and they cause incurable Chagas disease. Luckily, donor organs and blood are now routinely screened for Chagas antibodies – and that's how these were discovered.
Myocarditis and fluid accumulation around the heart have been reported in many vaxxed people (often, in the young and athletic). These are known severe symptoms of early-stage Chagas disease.
Ramola finds the three other cases of people reported in VAERS who were screened for this parasite (two teenagers and a 60-year-old) had all presented with heart problems after being vaxxed. She's then surprised to find it's now becoming routine to screen all vaxxed patients with heart issues for T. cruzi.
Ramola found an additional three people in the VAERS system, whose symptoms were labeled as "Trypanosoma brucei". T. brucei is protozoan related to T. cruzi from Africa that causes sleeping sickness in humans.
Patients listed in VAERS as suffering from the symptoms of sleeping sickness are having their symptoms labeled as this exotic parasite species, which does not affect members of the US population. Ramola says this points to an awareness within the medical community that there are parasites in the vaxx.
Interestingly, a primary drug used to treat infection with T. brucei is suramin, which has been touted in the health freedom community for much of 2021 as helpful in mitigating the effects of the vaxx – and of the spike proteins being shed by the vaxxed.
Ramola dives deeper into the transhumanist potentials of Hydra vulgaris and other Cnidaria species and other interesting findings in this most thorough report I've yet seen on the topic. 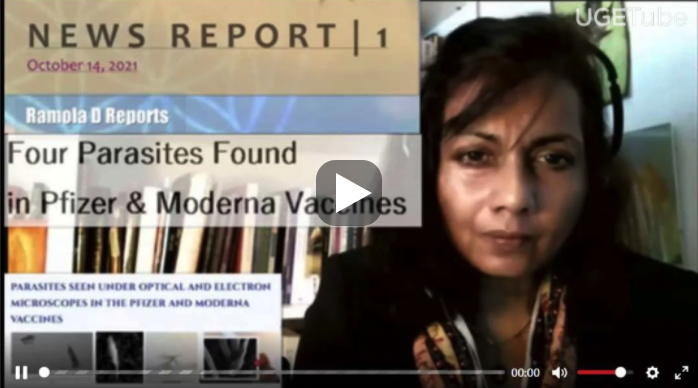