Paleontologists Unearth the Oldest Evidence of Herd Behavior in Dinosaurs 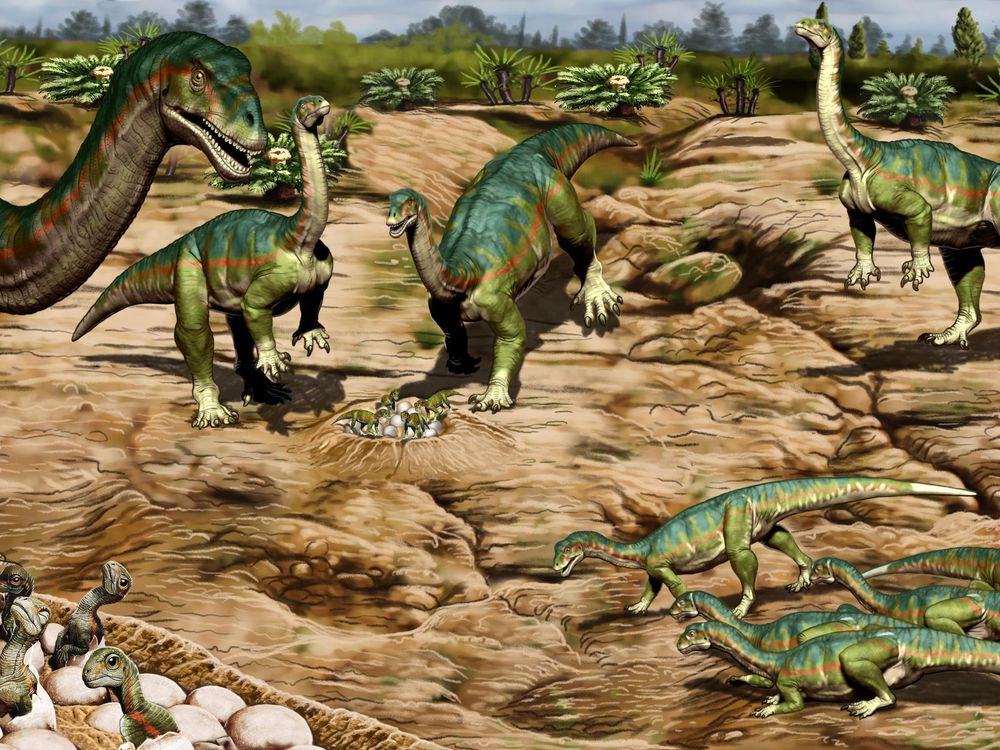 Nice to see evidence ,but with schooling in fish, it is ceertainly expected.  In fact our own experience informs us that the lone ranger never really survives.
whereas a herd provides available females for mating and a level of protection against preditirs.
All this produces a thriving herd that minimizes losses.

Each nest was found with eight to 30 eggs and in a relatively small area, suggesting that Mussaurus patagonicus raised its young in a communal breeding ground Jorge Gonzalez
In Argentina's Patagonia region, scientists unearthed an entire community of fossilized dinosaurs with more than 100 eggs and 80 skeletons of Mussaurus patagonicus—a long-necked herbivore. These fossils provide the earliest evidence of herding behavior in dinosaurs, reports George Dvorsky for Gizmodo.
"The site is one of a kind," Diego Pol, a paleontologist at the Museum of Palentology Egidio Feruglio in Argentina, tells Will Dunham for Reuters. "It preserves a dinosaur nesting ground including delicate and tiny dinosaur skeletons as well as eggs with embryos inside. The specimens we have found showed that herd behavior was present in long-necked dinosaurs since their early history."
Though scientists knew that some dinosaurs lived in herds, these findings suggests that this behavior developed around 193 million years ago—40 million years earlier than previously thought, according to a press release. Their findings were published last week in the journal Scientific Reports. 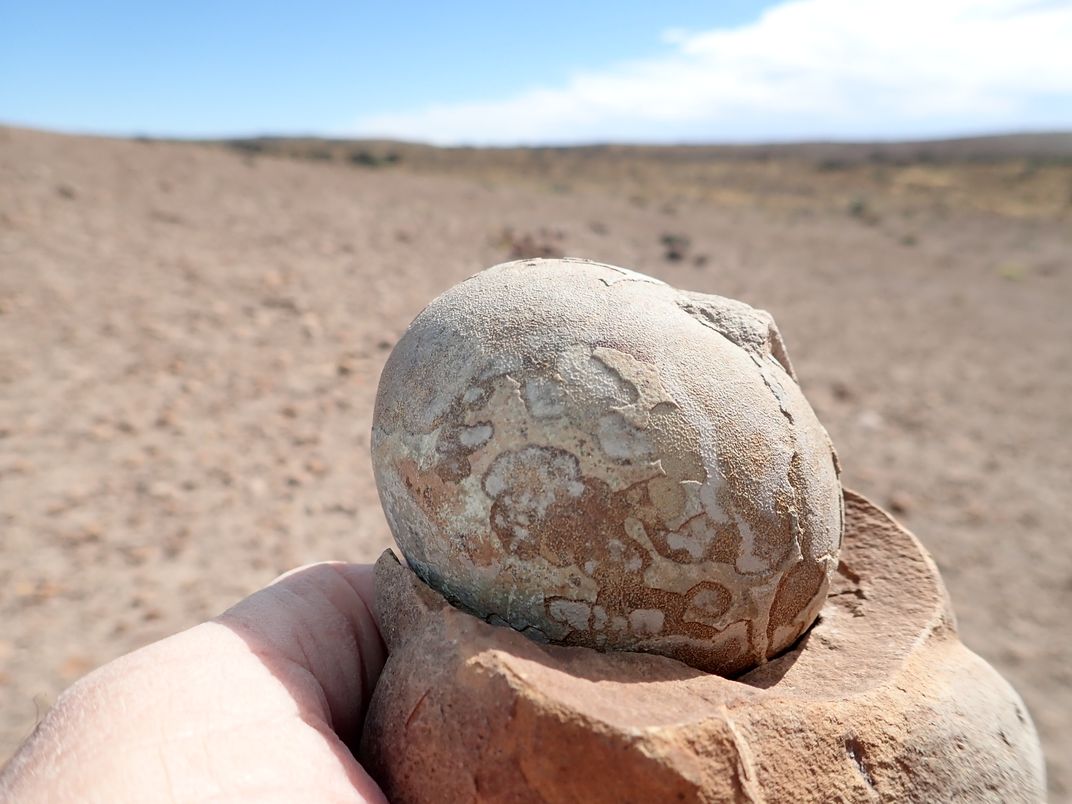 This Mussaurus patagonicus egg, found in southern Patagonia, is estimated to be 192 million years old. Roger Smith via Scientific Reports
Each nest was found with eight to 30 eggs and in a relatively small area, suggesting that M. patagonicus raised its young in a communal breeding ground. Interestingly, the scientists noticed how animals of a similar age were buried together: the eggs and young hatchlings in one spot, teenagers in another, and adults found alone or in a pair, according to the press release.
This phenomenon is known as "age segregation" and it's an indication of herding behavior. The young dinos stayed close to each other while the adults protected the herd and foraged for food, reports Aylin Woodward for Insider.
"What makes this discovery so exciting is that there are [hatchlings], juveniles, and fully grown adults of Mussaurus all in the same place," Ryan Felice, an anatomist focused on paleontology at University College London who was not involved in this study, tells Gizmodo. "This means that multifamily groups got together not just for breeding and nesting but that they potentially formed life-long herds, more like today’s elephants or wildebeests."
Living in herds could have given M. patagonicus a leg up in the evolutionary game. M. patagonicus laid eggs that could fit in the palm of a hand, and the hatchling would grow into a ten-foot-tall adult. Herding behavior could have protected the tiny hatchlings from predation until they grew up, reports Nicholas Bakalar for the New York Times. Plus, living in herds might have allowed this species to collectively find more food to fuel their large bodies, reports Gizmodo.
This discovery could help piece together the evolutionary timeline of sauropodomorphs, a clade of long-necked, herbivorous dinosaurs that includes M. patagonicus, according to the press release. M. patagonicus emerged in the late Triassic period, right before a massive extinction event wiped out 76 percent of all species on Earth—but the sauropodomorphs persisted. They eventually dominated land and gave rise to sauropods, like the iconic brontosaurus. Insights into their social behaviors could help explain how and why their lineage was so successful.
Posted by arclein at 12:00 AM