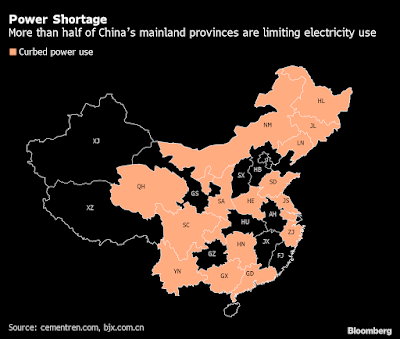 We are looking at rationing at least and otherwise we do not know for sure.  The drop in cement production  by nearly a third also reflects a contraction in construction that seems likely.
If this turns out to be a real problem, then we are now entering winter and peak domestic energy demand.  There is no better way to get folks out on the street with pitch forks than letting them get cold.
all this surely means something and i am not comfortable with the present narritive.  We also have poissble prophetic reports that are not good either and those could kill tens of millions.  Right now we simply do not know anything except we are likely been lied to.
Power Outages Hitting Most of China’s Provinces
October 3, 2021 by Brian Wang
https://www.nextbigfuture.com/2021/10/power-outages-affecting-66-of-chinas-economy.html?
China power problems are affecting 20 out of China’s 34 provinces. Cement production has been reduced by 29% and aluminum production capacity has been reduced 7%. Heavy industry has seen the most cutbacks.
Coal prices are up but China’s utilities have energy price controls. There were quotas on coal mining.
Coal mining quotas have been lifted as of last week.
The rolling blackout and other power shutoff is also hitting hospitals and street lights. The power shutoffs are very broad and the facts do not align with various excuses and stories coming from China.
China’s leadership has not been on top of the power shortage problem and has been months behind on reacting to the power emergency.
The shortage of hydroelectricity is dues to a widespread drought which has caused 30% less hydroelectric power generation.
The coal mining quotas were lifted last week. We will see if lifting the limits on production can fix the power shortage.
The coal mining quotas have been lifted to combat the power shortage.
China seems to have a coal shortage that is beyond what is fixable byv increasing imports.
Posted by arclein at 12:00 AM