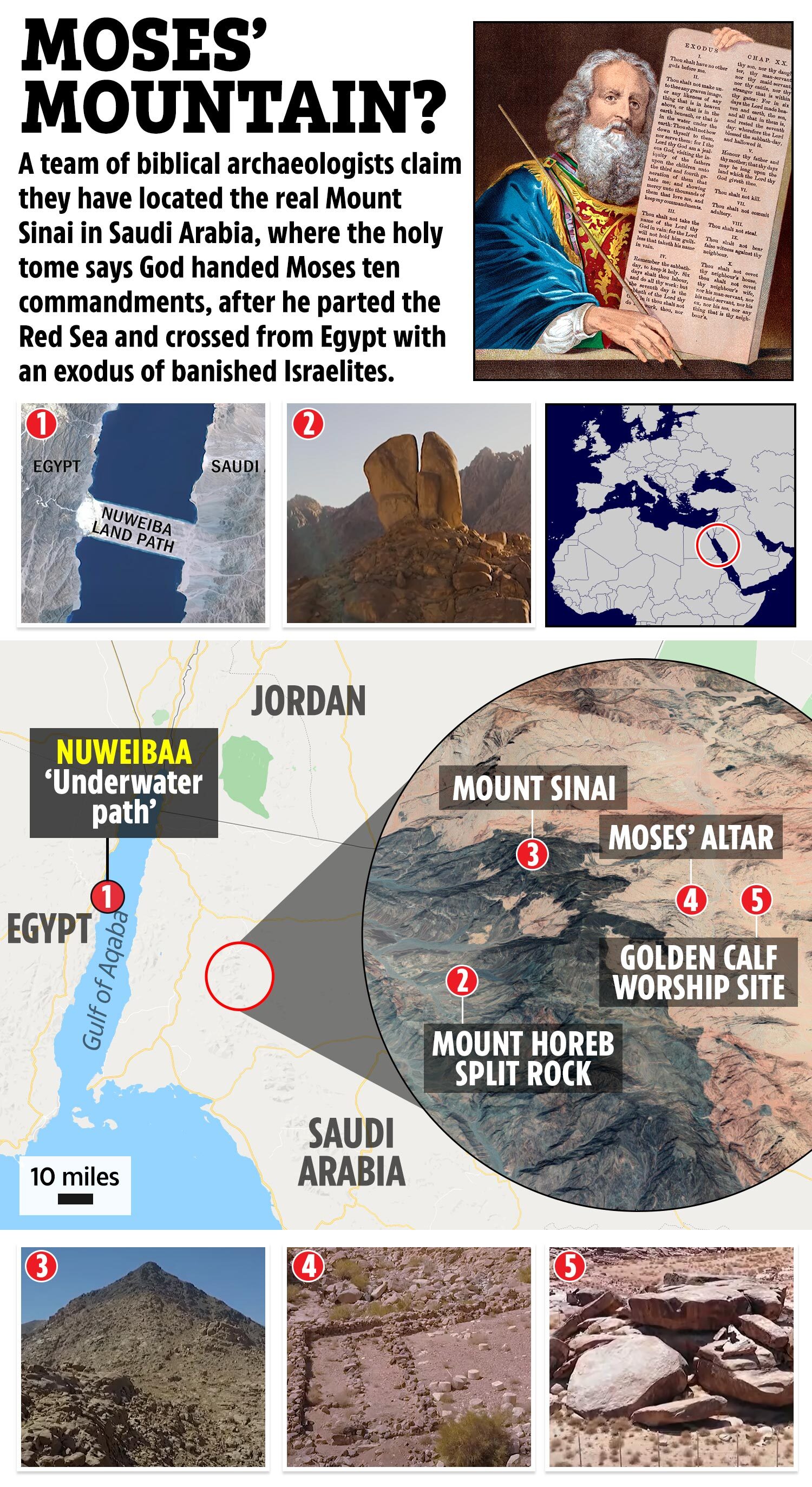 The first problem facing readers is that it is spelled out plainly that it was the Red Sea that was crossed.  That is infornation able to pass down through the ages.  A parting of the Red Sea argues for a shallows  crossing the sea and open to tidal drainage.  why is exists is another matter, but here it is argued to really exist.
It is unconvincing that an escaping caravan of refugees coukld ever cross the guarded Sinai at any time.  It is a completely different matter to head across the Egyptian desert to a known shallows and head out onto it as the tide began to fall.  The rise could well have been covered with sand as well allowing for a narrow escapement for the tide.
What is shown is what appears to be a coral reef and that could have provided the foundation for a crossing.  None of the story is suddenly impossible.  Proving it all possible should be possible.

BIBLICAL archaeologists have claimed to have located the holy mountain where the Bible says God gave Moses two stone tablets inscribed with the Ten Commandments.
They believe features and archaeological remains on the site in Saudi Arabia directly line up with the passage in the holy tome, some of which are fenced off as protected areas by the Saudi theocratic regime.

11
According to the Book of Exodus in the Bible, Moses leads the Israelites to Mount Sinai which is enveloped by fire, smoke and thunder.
The prophet then ascends the mountain where he convenes with God to receive the Ten Commandments.
For this reason, Mount Sinai is one of the most important sacred places in the Jewish, Christian and Islamic religions.
Certain scholars claim the Exodus is a myth because no evidence at the traditional Mount Sinai in Egypt's Sinai Peninsula, but what if they were looking in the wrong spot?
But while most people think this miraculous event is a work of fiction — written hundreds of years after it supposedly took place — there are some who claim mounting evidence that indicates it really happened.
A mountain range in Egypt was for hundreds of years thought to be the site of the holy mountain.
But sleuths from the biblical archaeologist organisation the Doubting Thomas Research Foundation claim this is wrong and have compelling evidence to prove this.
Foundation president Ryan Mauro, who is a Middle East expert, told the Sun: "One of the main reasons certain scholars claim that the Exodus is a myth is because little to no evidence for what the Bible records has been found at the traditional Mount Sinai in Egypt's Sinai Peninsula.
"But what if these scholars have actually been looking in the wrong spot?
"Move over into the Arabian peninsula and you find incredibly compelling evidence matching the Biblical account."
'SCORCHED MOUTAIN PEAK'
The real holy site, he says, is in the northwestern province of Saudi Arabia and there is strong evidence to prove this.
The researchers then went on to identify Jabal Maqla, a peak within the Jabal al-Lawz mountain range, as Mount Sinai.
The Bible said God descended on Mount Sinai as a fire.
And they claim the mountain, with its clearly blackened peaks, suggests this is the site. 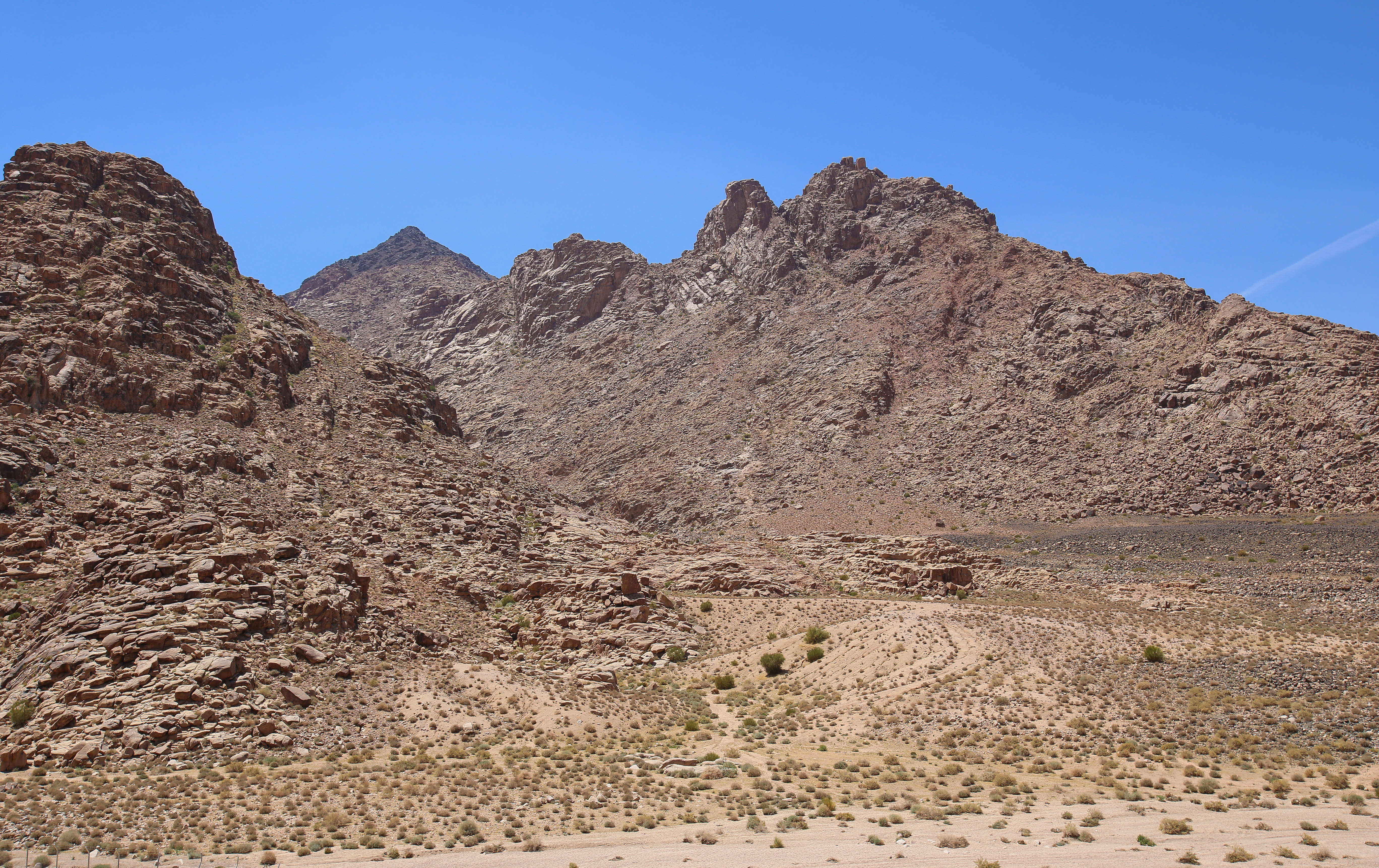 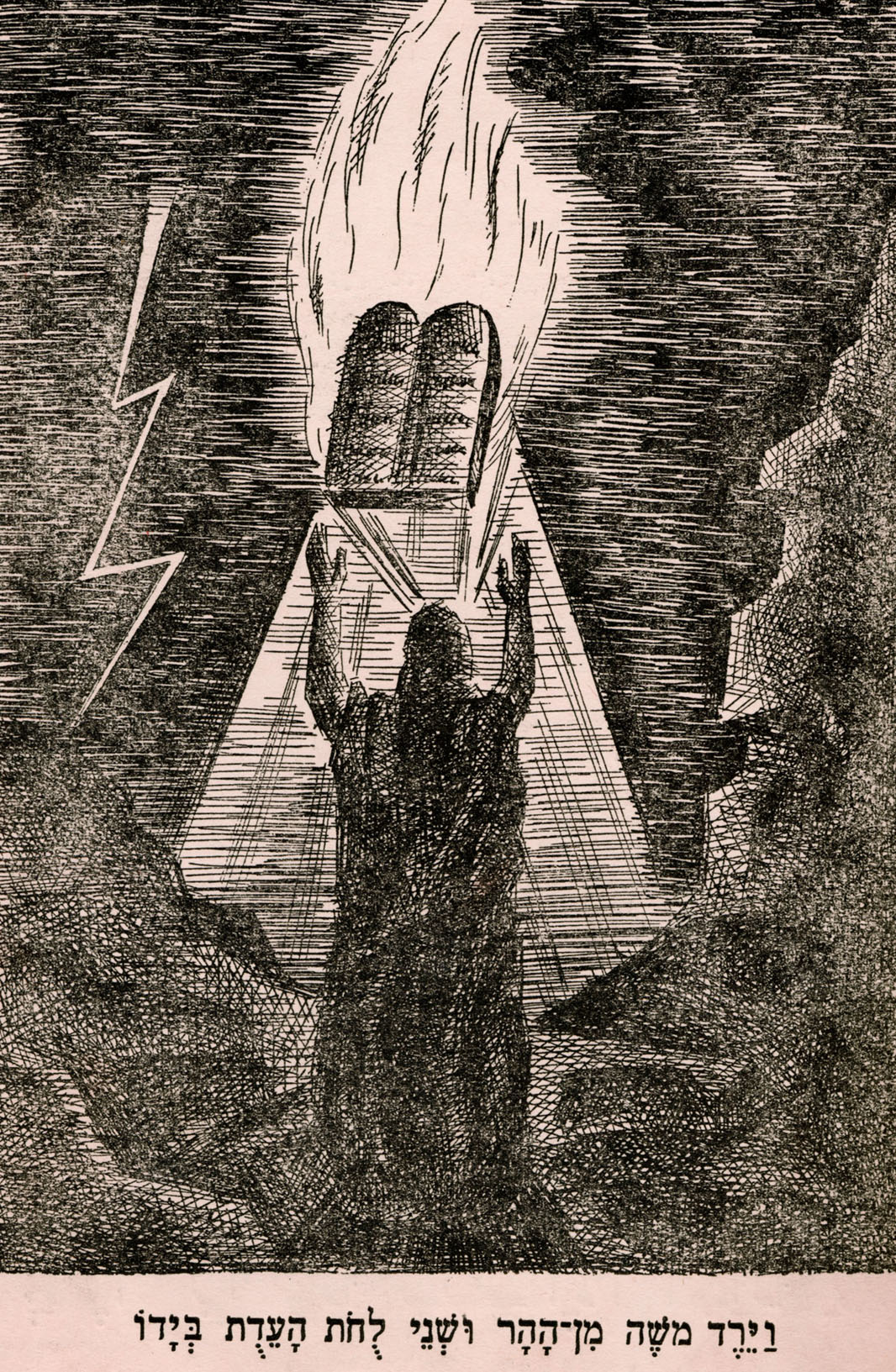 11In the tale, God comes to Moses as fire and lighting and hands him the Ten CommandmentsCredit: Getty
'SIGNS OF PATH UNDER RED SEA'
In the Book of Exodus Moses holds out his walking stick and God parts the waters and they manage to flee.
The story goes that the water then came rushing back in and crushed the pursuing troops.
The foundation believes Nuweiba Beach is the most likely crossing point because studies have found land paths below the water.
They argue this evidence found by Swedish scientist Dr Lennart Moller reveals the remnants of the fleeing army.
It is claimed they found what they believe were the shapes of chariots which were encased in coral, although the metal and wood was long since dissolved.
Across the Red Sea, there is said to be evidence that is allegedly a possible match for the Biblical campsite Elim, noted to have 12 wells and 70 palm trees with a dozen of the water sources remaining today. 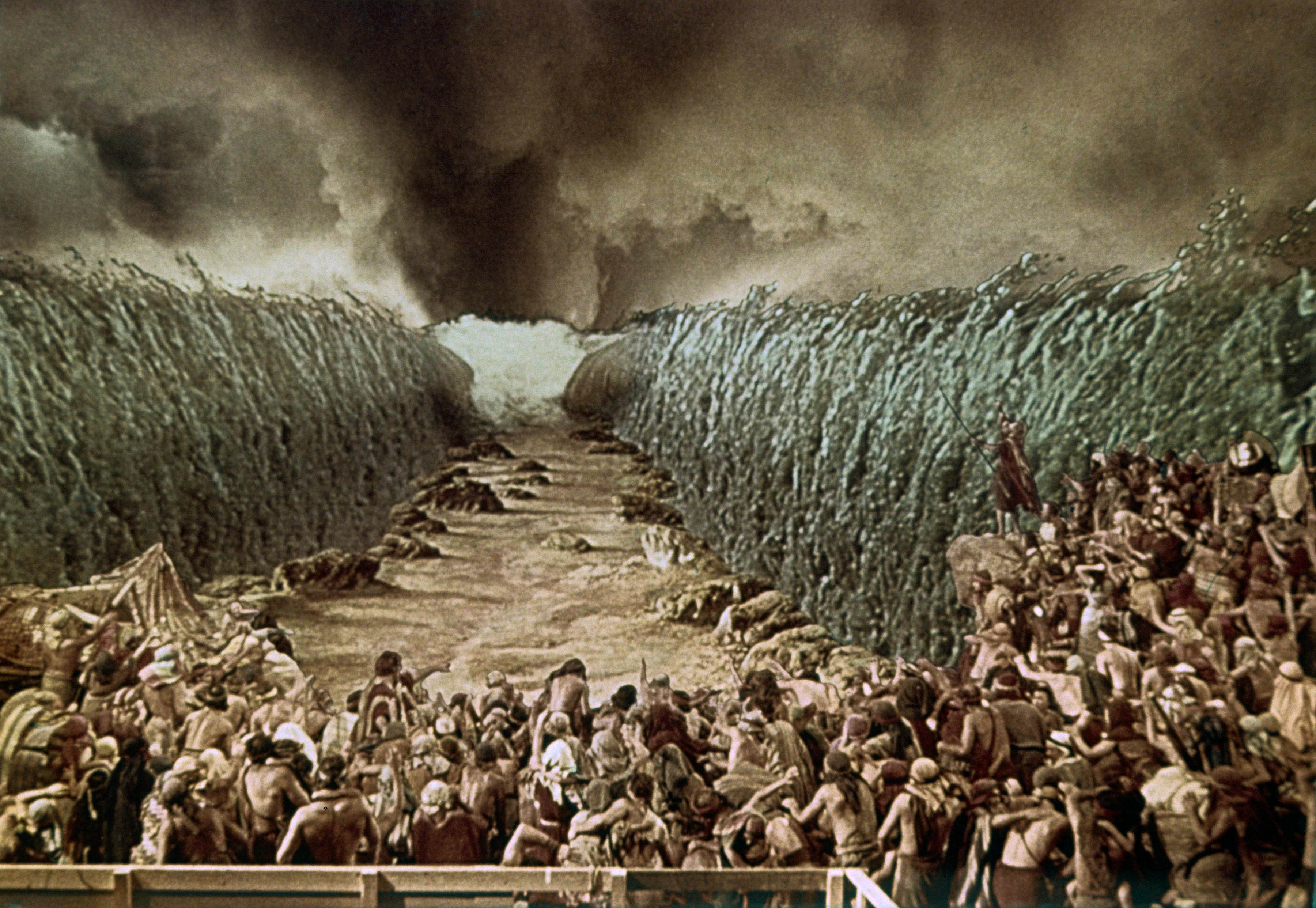 11Moses parts the Red Sea and guides the Israelites across with the Pharoh's army in pursuitCredit: Paramount 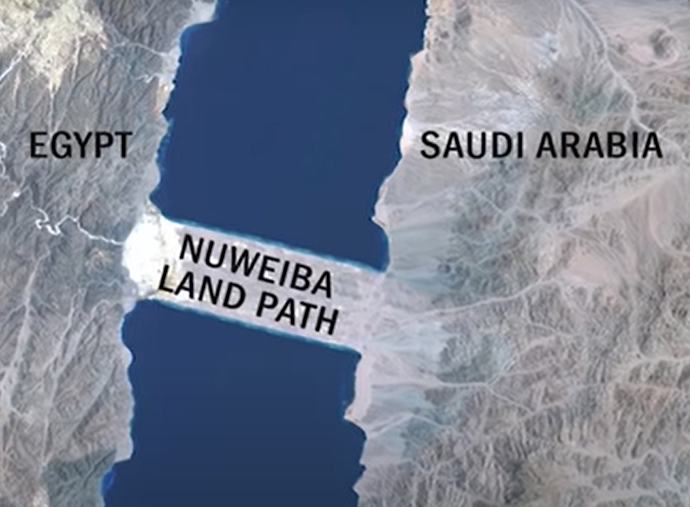 11An apparent land passage was found under the Read Sea 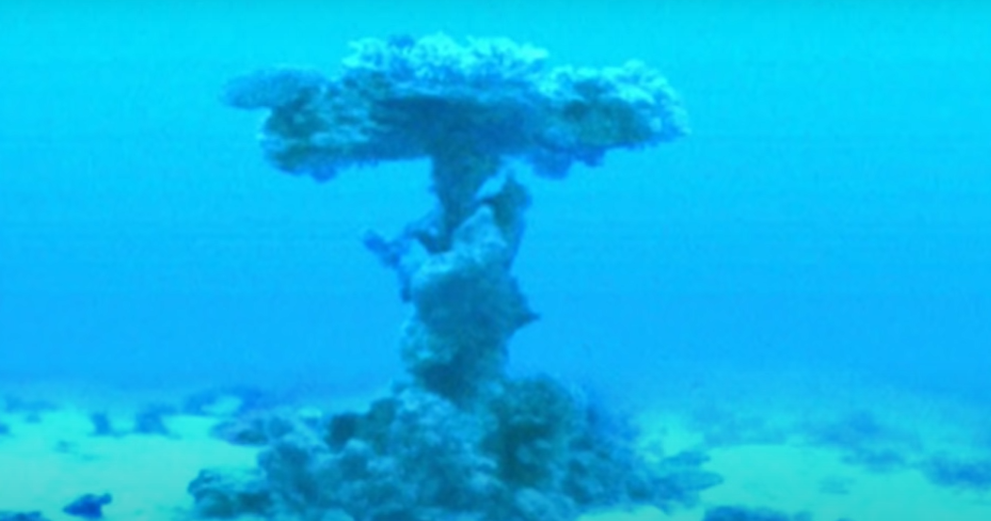 11It is claimed coral formed around the remnants of the Pharohs' army, in this image a chariot wheel is allegedly shown
MOUNT HOREB SPLIT ROCK
On the path to the suspected Mount Sinai is a towering split rock sitting upon a large hill.
The rock and hill beneath show signs of massive amounts of water erosion — yet this is in an area that receives very little rainfall.
Mr Mauro said: “We believe this distinct landmark could be the rock that God commanded Moses to strike which water then gushed forth from, miraculously providing for the Israelite population." 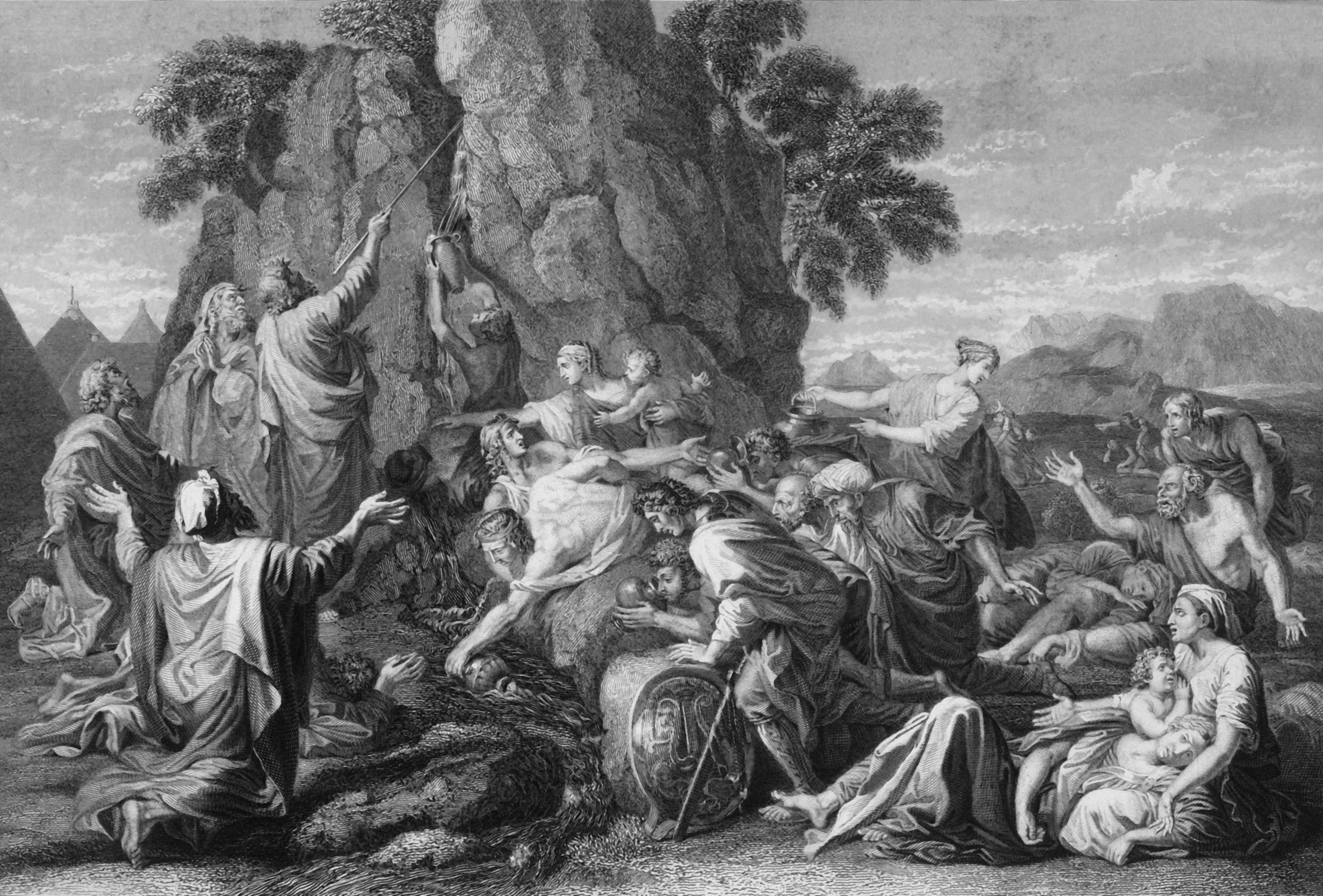 11In the Old Testament bible, Moses splits a rock and water gushes out 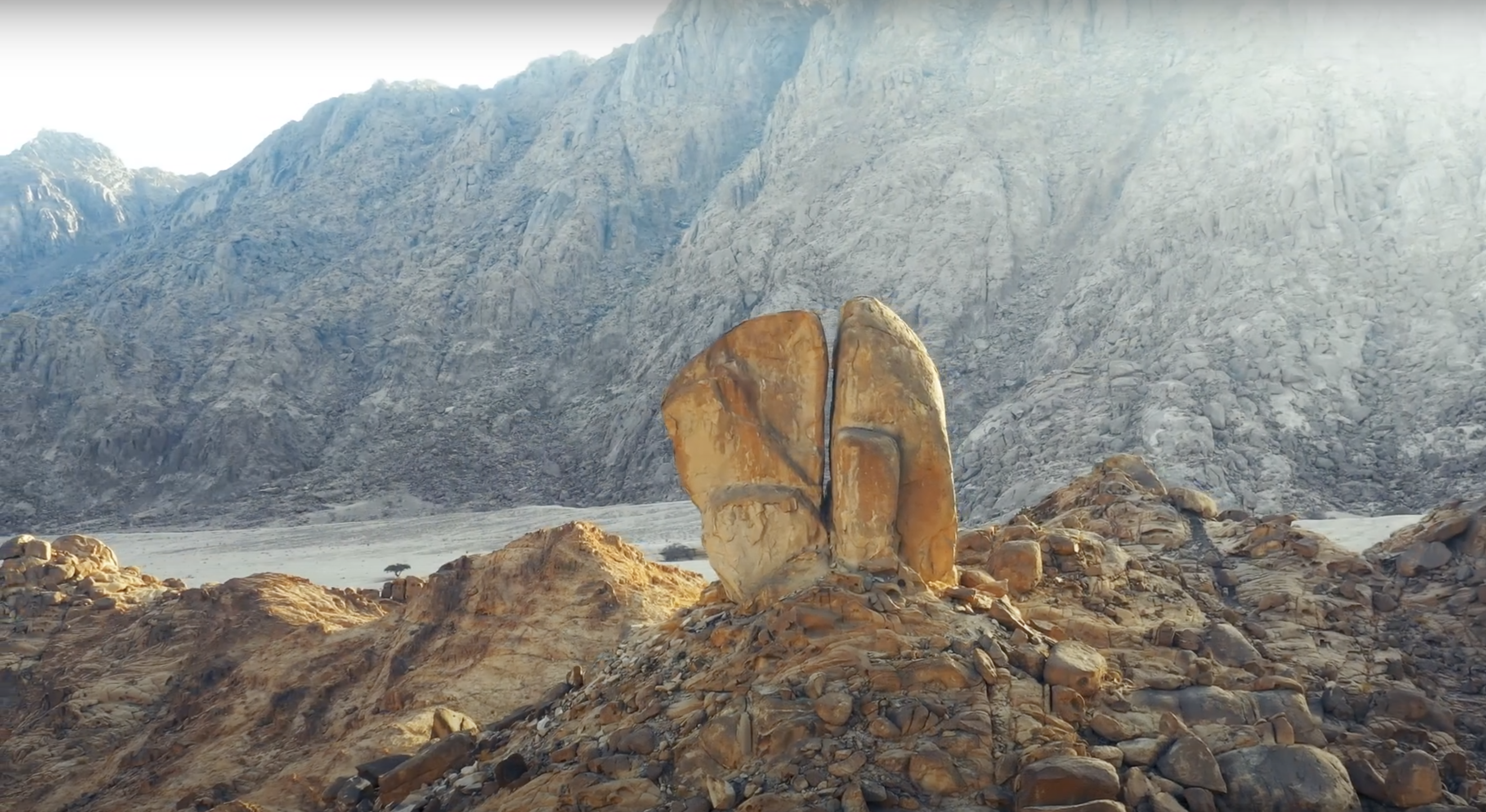 11This is said to be the rock that was split by Moses
'MOSES' ALTAR'
At Jabal al-Maqla there is an ancient altar site composed of uncut granite stones at the base of the mountain and the remains of what appear to be small, ancient pillars composed of marble beside it just as in the Book of Exodus.
Moses is said to have built an altar made of uncut stones at the base of Mount Sinai and sets up 12 pillars representing the 12 tribes of Israel beside it.
So far nine pillars have been found with several broken pieces of marble scattered throughout the area. 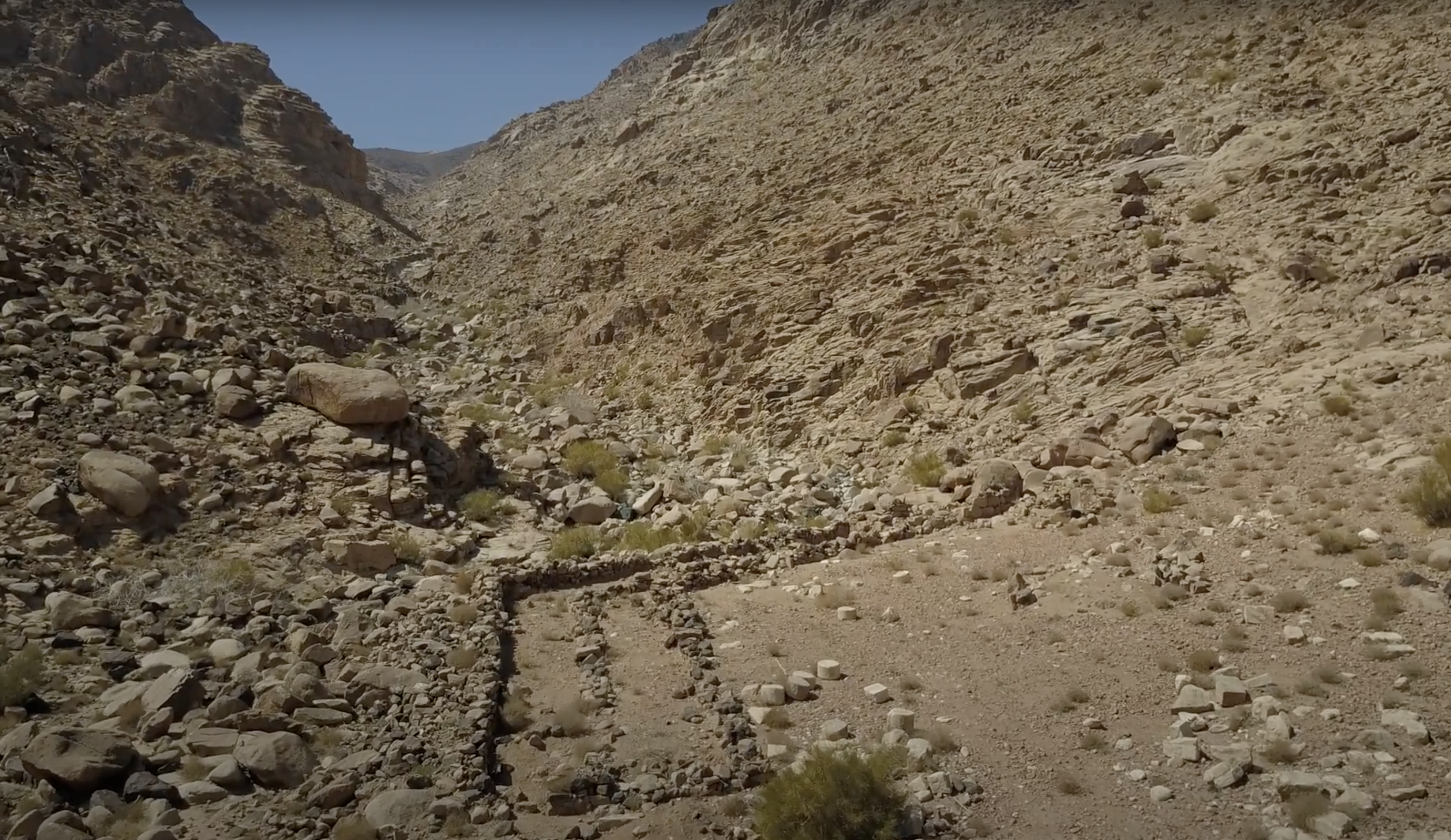 11The site suspected to be Moses' altar
'GOLDEN CALF WORSHIP SITE'
Two more crucial pieces of evidence at this mountain are what is believed to be the Golden Calf worship site and signs of a graveyard.
Chapter 32 of Exodus tells of the Golden Calf incident, where the Israelites make a golden calf, which was an Egyptian god, and worship it while Moses is on Mount Sinai.
When Moses comes back down the mountain, the golden calf worshippers are killed for their idolatry.
Mr Mauro said: "Close to the mountain, we have this site covered with depictions of people worshipping bulls and cows.
"And what's really significant is that these petroglyphs are isolated to this area. It's not like they're carved all over the mountain."
It comes as the Doubting Thomas Research Foundation and others have discovered what they believe might be Noah's Ark. 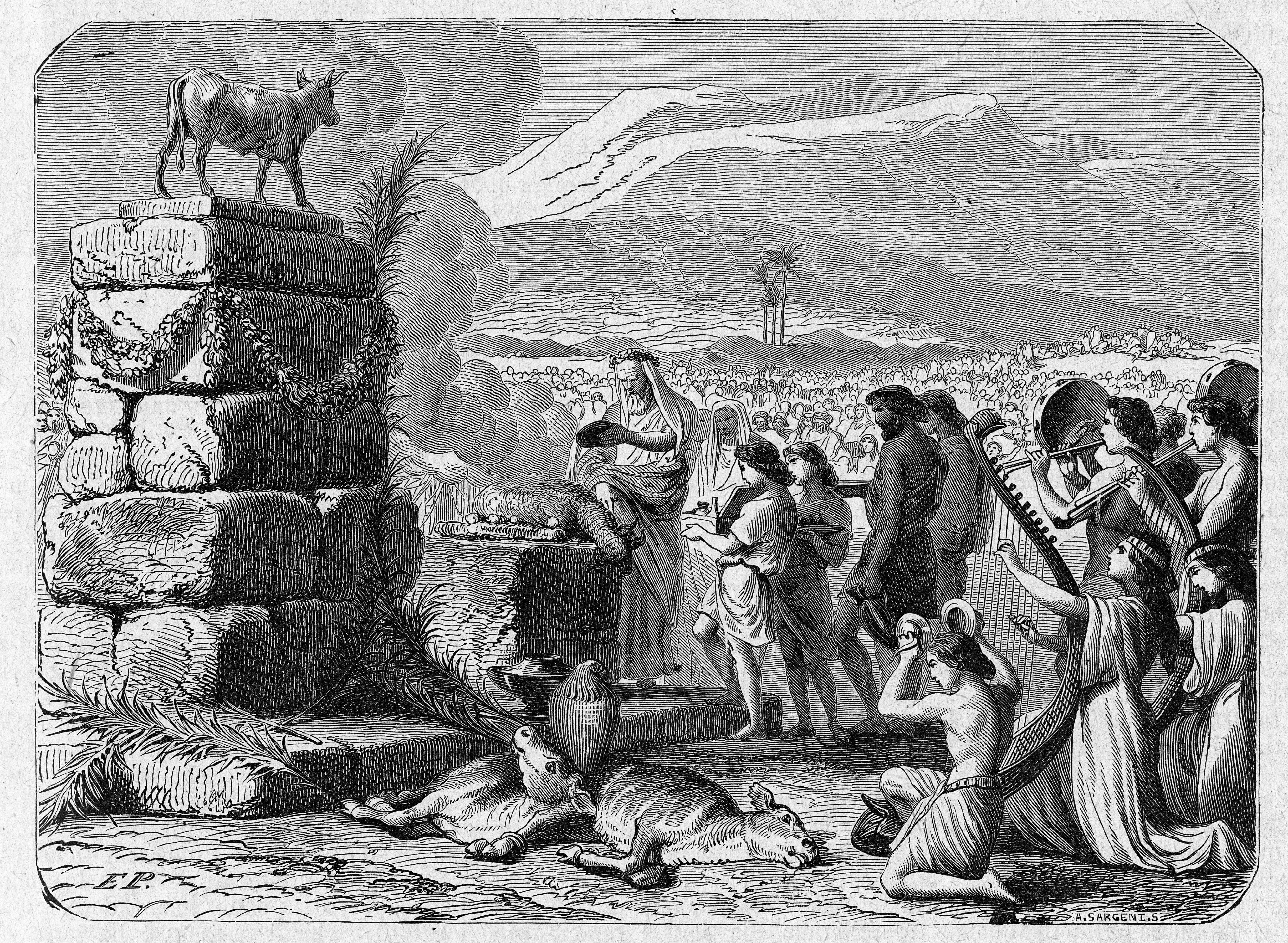 11A depiction of the Golden Calf 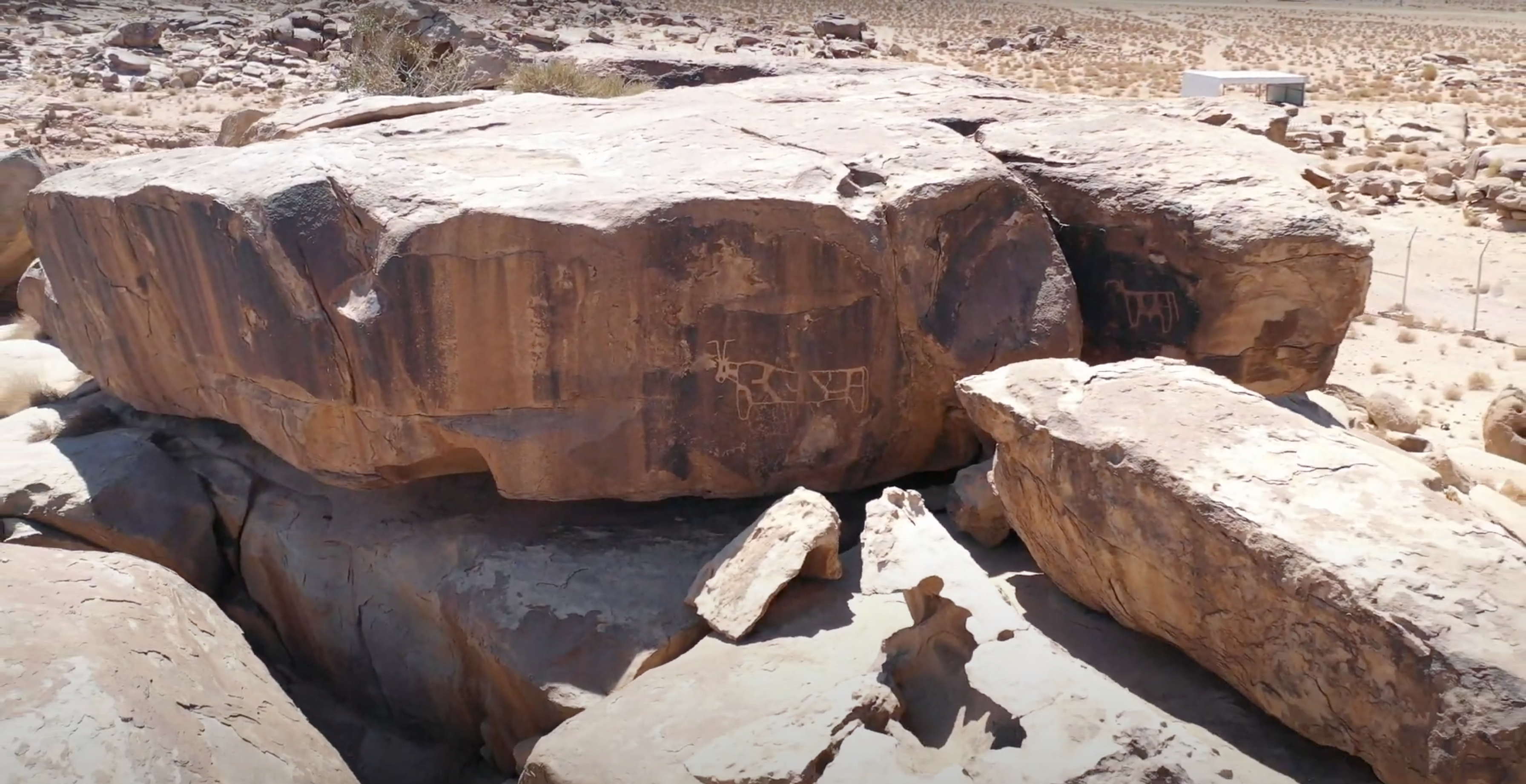 11This has been identified as that same temple with depictions of calves on its side
Posted by arclein at 12:00 AM