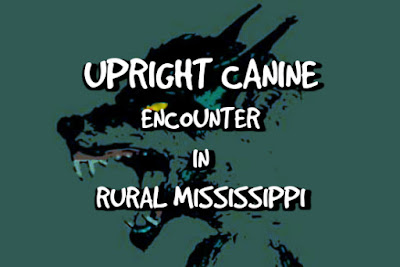 Excellent viewing of our friend the giant sloth.  his responses are correct and largely instinctual as well.  Good to know as that is what keeps us alive.

We also learn that this creature travels on the run.  That covers vast distances easily and can likely be sustained for some time..

This adds to our growing inventory of such reports.  by now we are close to 100..

The following account, recently posted on Reddit, referenced a 'werewolf' sighting in rural Mississippi. There has been an increase of upright canine sightings throughout Mississippi in 2017.

Many of the reports have come to me through Facebook and other social media:


So, I NEVER believed in the supernatural, until I was like 18. Me and my friends played with a Ouija Board (story for another time). Anyways, after the ensuing craziness from that escapade, I'm a full on believer.

On with the actual sighting. I live in a very rural part of Mississippi. I believe my town has something like 247 people in it. Everybody knows everybody. Weird things have happened before, like animals being slaughtered or going missing, that sort of thing. Naturally we chalked it up to coyotes or other critters.

I'm an avid hunter, so I was heading out to the woods with my bow, a fully decked out Matthews Creed. I got out a little earlier than usual, so it was still pretty dark. I've never minded the woods before, so all I planned on doing was relaxing in my stand for a while as I didn't feel like stalking today.

It's not too far away from daylight, so the birds and other wildlife are starting to make their morning calls. Usually pretty peaceful, right? I swear to God, in the span of a second, everything in that patch of woods shut up at the same exact time. Dead silence. It didn't even try to be subtle, that alone scared the piss out of me.

So naturally my scared self froze, and just listened for anything. My first thought was, 'Oh shit, something's out here with me', which freaked me out even more. Then I started to think maybe it was just a bear or a bobcat, which I still was terrified to meet up with, but at least it gave me a logical answer.

I figured I could hear a bear coming, but I knew big cats were renowned for stalking people without their knowing, which scared the daylights out of me. I decided to keep moving towards my stand, post up, and just point my bow down the tree. After what seemed like forever, I freaking made it. I shuffled up the stand, pulled out my knife just in case, and just listened.

Dawn was definitely breaking now, which made me feel better. Still no sounds of wildlife, which was getting more and more eerie. Now, my stand is perched on the side of a creek. The creek wasn't very deep, like maybe to the top of your ankle. About the only sound I could hear was the slight noise of the running water. Then I hear something to my right, and it is running fast. I instantly raise my bow and wait. It's getting louder and louder, closer as well.

I almost screamed when I saw this bastard. It literally looked like something out of 'Dog Soldiers', only more muscular. This thing busted through the brush, ran down the slope and through the creek, then disappeared on the other side. I have seen some shit, let me tell you, but I was shaking like a newborn babe. I didn't ease off my drawstring for like 10 minutes, which is a LONG time to hold a bow, FYI.

Anyways, after that, the sun really started to show and the birds started chirping. I had calmed myself down, so I got out of there in a hurry. While I was terrified at the time, it's definitely gonna be one of my coolest memories to look back on. I'm just gonna move my stand and hunt elsewhere lol - Ehhhhhhhhhhhhhhhhhh1

NOTE: I believe the witness actually encountered something very unusual. In light of the recent number of upright canine sightings Mississippi, this account can't be overlooked. The witness answered a few inquiries on the thread. Lon
Posted by arclein at 12:00 AM